So, after attending D23 Expo 2011 and then seeing the scads of online complaints about things like mismanaged lines, undersized venues, and lack of alternative programming, my first thought was not to even do a write-up, since I’ve been complaining about these things since the last Expo. I guess the only way anybody else was going to get vocal about the problems was to experience them firsthand, and that definitely happened with this year’s more heavily attended event. 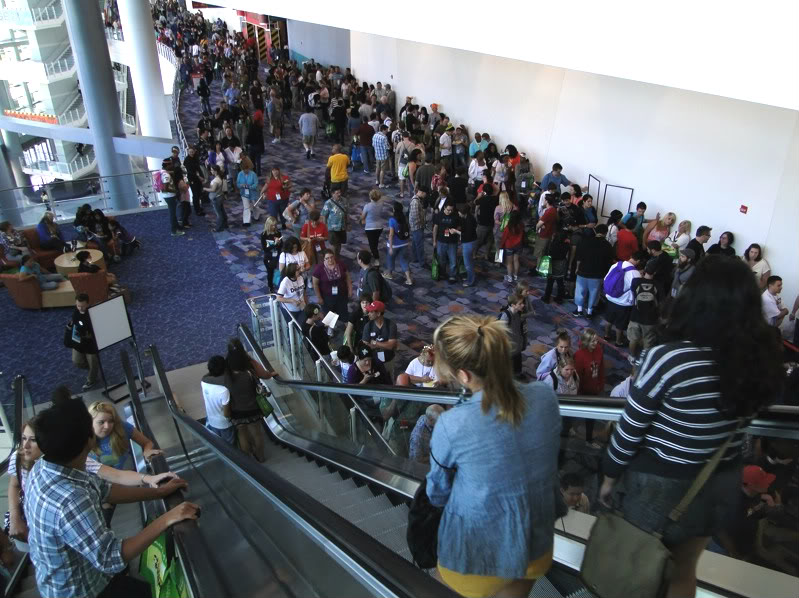 The thing is, D23 Expo 2011 had a lot of great stuff going on, and there were even a few improvements over the previous Expo. The Treasures of the Walt Disney Archives exhibit was excellent and could stand on its own as a traveling, ticketed attraction. The idea of having the camera and cell phone check before people got in the Arena queue was such an obvious solution, it’s baffling they didn’t think of it last time. Hanging TVs in the Arena queue to entertain us with highlights of the Expo and program schedules was another great improvement. And of course the quality of all the shows, panels, and presentations was top notch—the problem was that so few Expo-goers actually got to experience them. 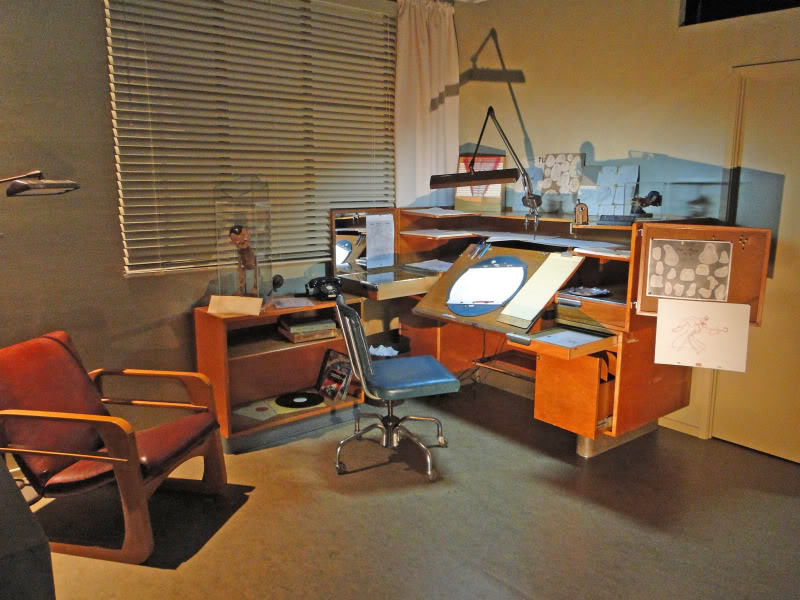 Disney expected 45,000 attendees yet had room in the Arena, Stage 23 and Stage 28 combined for only 5,250. Granted, not all 45,000 were there each day, but even if only half that number showed up, less than 25% of all attendees got a seat in each presentation.

The capacity of the Arena was reduced to 4,000 from its actual 10,000, and there were hundreds of seats on the sides left empty. This was probably due to their obscured view of the stage, but who wouldn’t take one of these if the alternative was missing the show altogether? The 1,000-seat Stage 23, site of the Dick Van Dyke concert that turned away so many, was carved out of a ballroom that can hold up to 3,800. Some of that space was devoted to the queue, but couldn’t the line have been diverted into one or both of the 800-capacity meeting rooms on either end of the third floor instead? 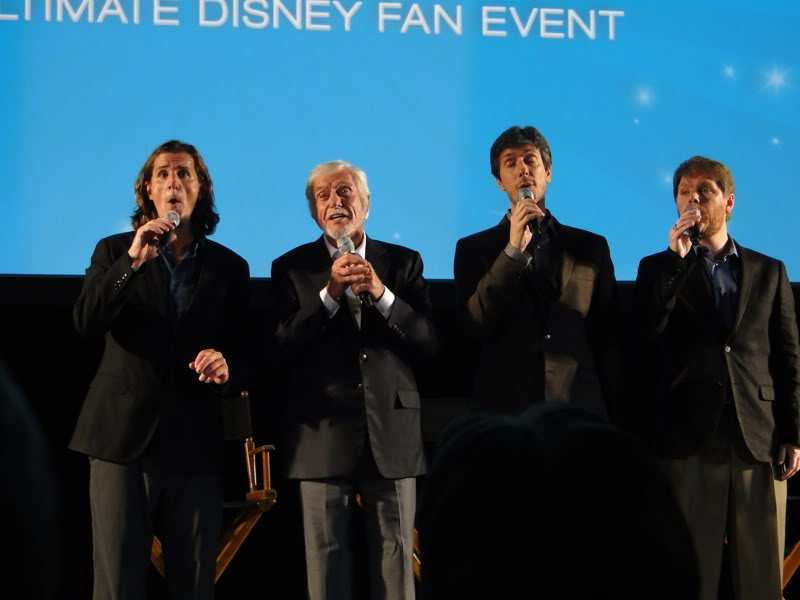 Dick Van Dyke & the Vantastix played to a packed Stage 23

And if expanding the size of the venues wasn’t an option, what about repeating the more popular presentations in Stages 23 and 28? Or, why not rebroadcast each of the presentations in the Arena at the end of the day like Comic Con does? If rebroadcasting violates copyrights or performers’ union rules, how about a live feed of each presentation in the queue areas as people line up for the next presentation?

How can a company that revolutionized the amusement park industry and invented FASTPASS be so bad at managing crowds and capacity inside a convention center? The horror stories are numerous: almost two-hour waits just to get inside the convention center at opening Friday and Saturday; people waiting hours in line for presentations only to be turned away at the last minute; non-D23 members being shut out of the first Arena presentation of the day because it filled to capacity well before they were allowed into the Expo; rows of empty seats in presentations that were announced as being full; and even a near riot over a keychain giveaway at the Walt Disney Studios booth after staffers tried to combine lines.

On Friday, the line wrapped all the way around the convention center and down toward the Anabella Hotel

Many suggestions have been offered, and I can’t believe Disney wouldn’t think any of them are suitable alternatives. How about passing out numbered tickets or wristbands or even just stamping people’s hands in the presentation and Arena queues? What about letting us reserve our space in each panel online beforehand? Shouldn’t there be separate entrance lines for the Arena, the show floor and the Dream Store? If nothing else, the red-shirted staffers doing most of the line management need far more thorough training, plus walkie-talkies that allow them to stay in the loop with changing policies and procedures.

One of the most egregious yet easily solved crowd-control problems was the way staffers were back-filling the scores of front-row Sorcerer seats with latecomers while the people who had been waiting at the front of the line for two or three hours in order to get a good seat were made to sit seven or eight rows back. Disney could have told the Sorcerers (who paid $1,000 each for reserved seating in all the presentations) they had to be in their seats X minutes before the start time and then started admitting the general public, so that the front of that line would be filling those empty seats in the front rows. Instead, they admitted the public first and sent them to the middle of the room. Then, after those seats were filled, they started letting people at the back of the line, who’d waited the shortest amount of time, go up to the front rows while people who’d been at the front of the line frantically scrambled out of their crappy seats and tried to grab front seats. I’m surprised no fights broke out! 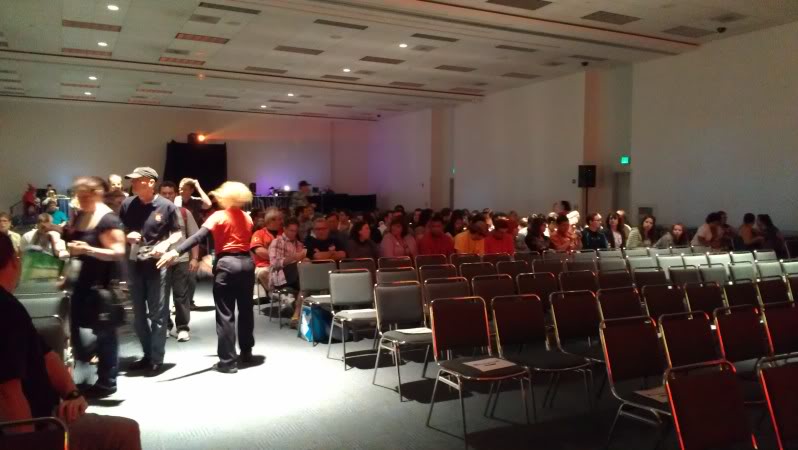 The root of all these problems is that there wasn’t enough real programming—panels, presentations, and shows—to occupy the number of attendees. At Comic Con, it’s not a big deal if you don’t get into a panel because there are eight or nine others going on at the same time. At D23 Expo, there are just three options at any one time: the Arena, Stage 23, and Stage 28. Paid autograph sessions, product releases, and celebrity appearances on the show floor are not equivalent substitutes for a panel discussion with legendary Imagineers or a presentation on the creation of Disney California Adventure’s new Buena Vista Street.

It was also interesting to see how many missed opportunities there were for enhancing the convention experience with the kind of “spot” entertainment found in the parks. Where were the roaming characters—especially in places where people were already waiting in lines, like the upper floors? How about a few Photopass opportunities with those big movie props and auction lots found on the show floor? Why not project vintage Disney cartoons on the walls in the various queues to help people pass the time? 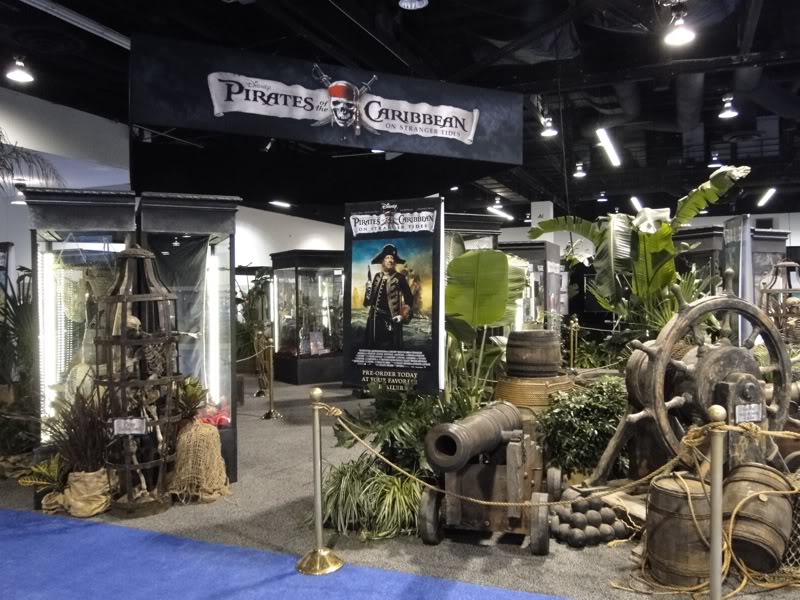 Gee, wouldn't this be a swell place to have your photo taken with Captain Jack Sparrow?

Disney has theme park crowd control down pat. If they’re going to branch into the convention business, why aren’t they applying this experience? Yes, it’s only their second attempt, but they’ve had two years to learn from the mistakes of D23 Expo 2009 and come up with new solutions. Disney sends animators on trips around the world to do research for their films—why can’t they send a few Expo managers to any of the numerous successfully run conventions held every day in the US? Combine that kind of knowledge with Disney’s skill at entertaining the masses and you’ll have one of the best conventions in the world!

This post is part of DISMarks’ Disney Blog Carnival #29—check it out!