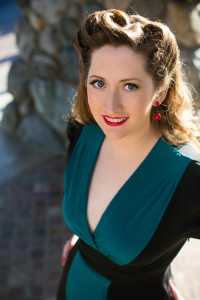 Lurkyloo is the online alter ego of Carrie Hayward, author of Carrie Hayward’s Fairytale Weddings Guide and host of the Disney Wedding Podcast. She has written and edited for newspapers, magazines, and the Web since 1997, but she’s been a fan of Disneyland all her life. Carrie and her husband, Patrick, try to visit the park monthly, and they especially enjoy date nights at Disneyland for swing dancing.

Lurkyloo was born in 2006 when Carrie joined the DIS Boards, the Internet’s largest and friendliest Disney community. Her screen name is a play on the online term lurker and the offline term lookyloo, although she has since obliterated her “lurkyloo” status by racking up more than 14,000 posts on the DIS. In 2008, Carrie began her first Disney trip report, an account of the Lurkyloos’ wedding and honeymoon at Walt Disney World. She soon realized that trip reports were the perfect extension of the humor column she’d done for her college newspaper and a great way to get back into writing for fun.

At the same time, Carrie was inspired to write Carrie Hayward’s Fairytale Weddings Guide by the need for comprehensive, aggregated information on Disney’s Fairy Tale Weddings and a desire to share the tips and tricks she accumulated while planning her own wedding. She also wanted to create a bridal organizer with worksheets tailored exclusively to the needs of those planning weddings, vow renewals, and commitment ceremonies at Walt Disney World and on the Disney Cruise Line.

In 2012, Carrie introduced the Disney Wedding Podcast, a weekly show devoted to planning (or just dreaming about) weddings, honeymoons, engagements and anniversaries at the Disney parks and resorts.

Carrie and Patrick have chronicled their trips to Disneyland, Walt Disney World, Disneyland Paris and Tokyo Disney in photos, tweets and trip reports. Disney Travel Babble was created to house all of Lurkyloo’s trip reports in one place, along with information on planning a Walt Disney World wedding, a how-to section for Disney travel, and a live travelblog of the Lurkyloos’ various Disney-related adventures.