How to Get to Paris From Disneyland Paris!

With our time in Wonderland at an end, we left the Disneyland Hotel and dragged our suitcases through the snow to Marne-la-Vallée/Chessy Station, heading to Paris for four jam-packed days of sightseeing before the Scotland leg of our trip. 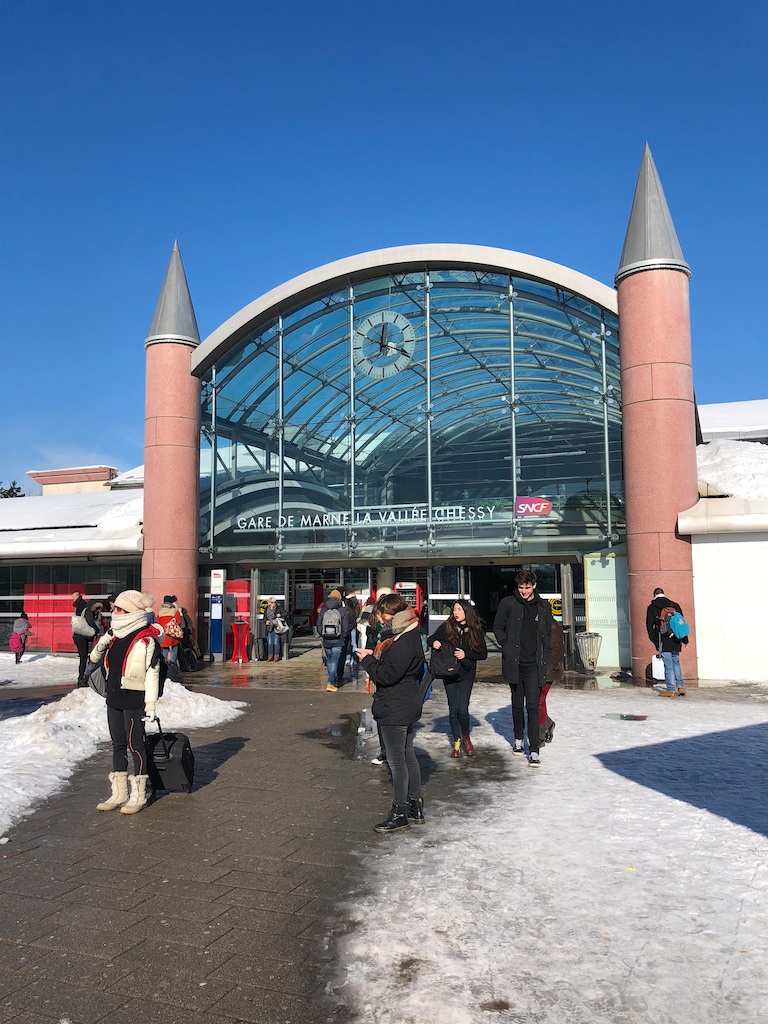 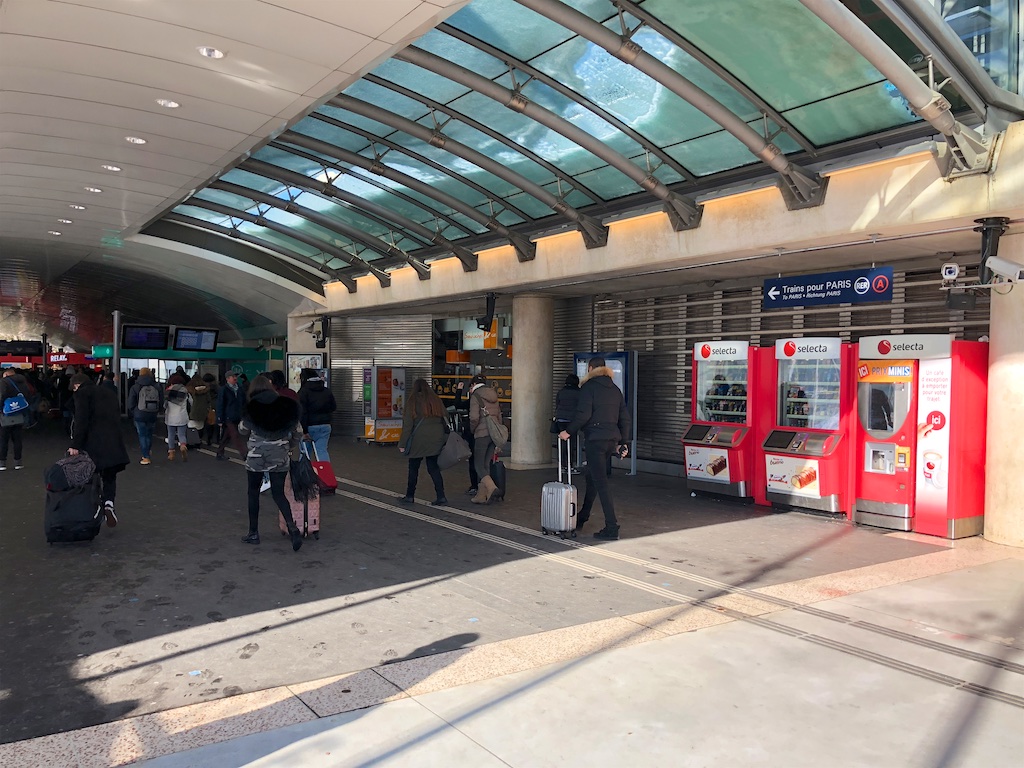 Everything I’d read about traveling from Disneyland Paris to real Paris said it was super-easy. “Trains depart all the time! Just grab your ticket and go!”

But when we stepped into Chessy Station around noon that Saturday, it was like being dropped into the middle of an alien city-planet. Massive crowds thronged the ticket machines on the right and the left, and I couldn’t figure out from the signs which bank of them we were supposed to use to buy a ticket to Paris. Some of them had signs that made it look like you could only pay with a pre-purchased travel card (but apparently it’s just their icon for a credit card).

The line for the staffed ticket windows had more switchbacks than a Disney queue on New Year’s Eve, but I put Patrick in it on the advice of a lady who said the ticket machines often had technical problems and would take longer than waiting to purchase at the ticket window. 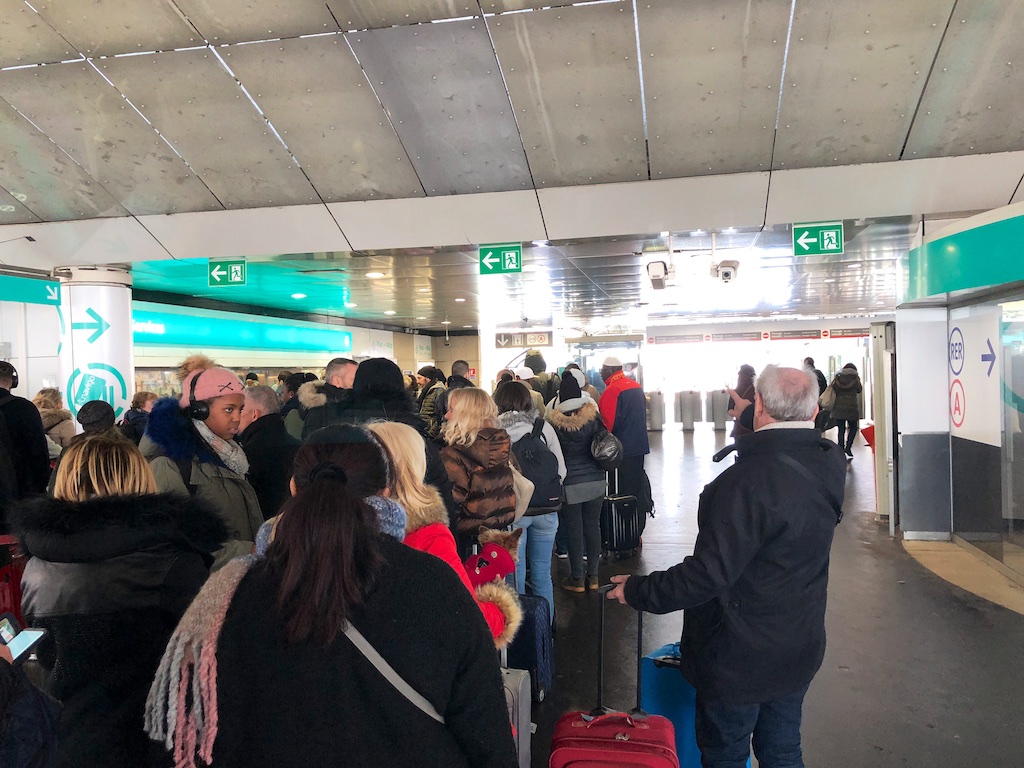 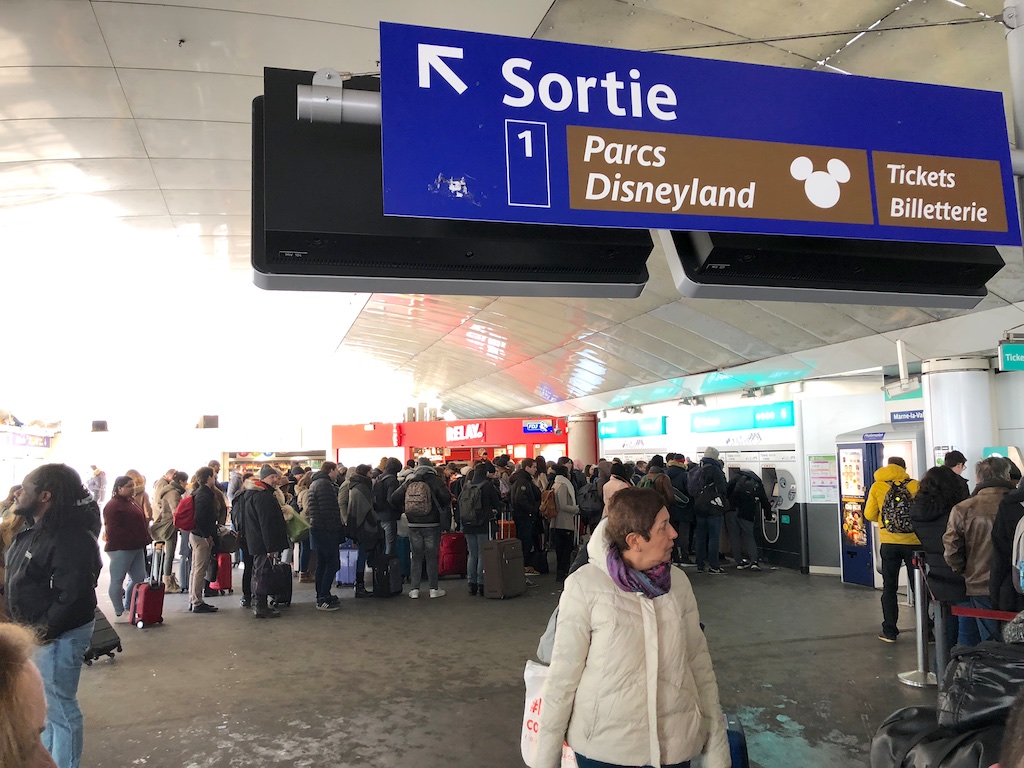 Then I randomly chose the bank of ticket machines on the right and hopped into the amorphous blob that became the lines for each machine. People drifted from line to line, always angling to get into the shortest one. I kept texting Patrick to gauge his progress, but 30 minutes later we both got to the front of our lines at the same time! 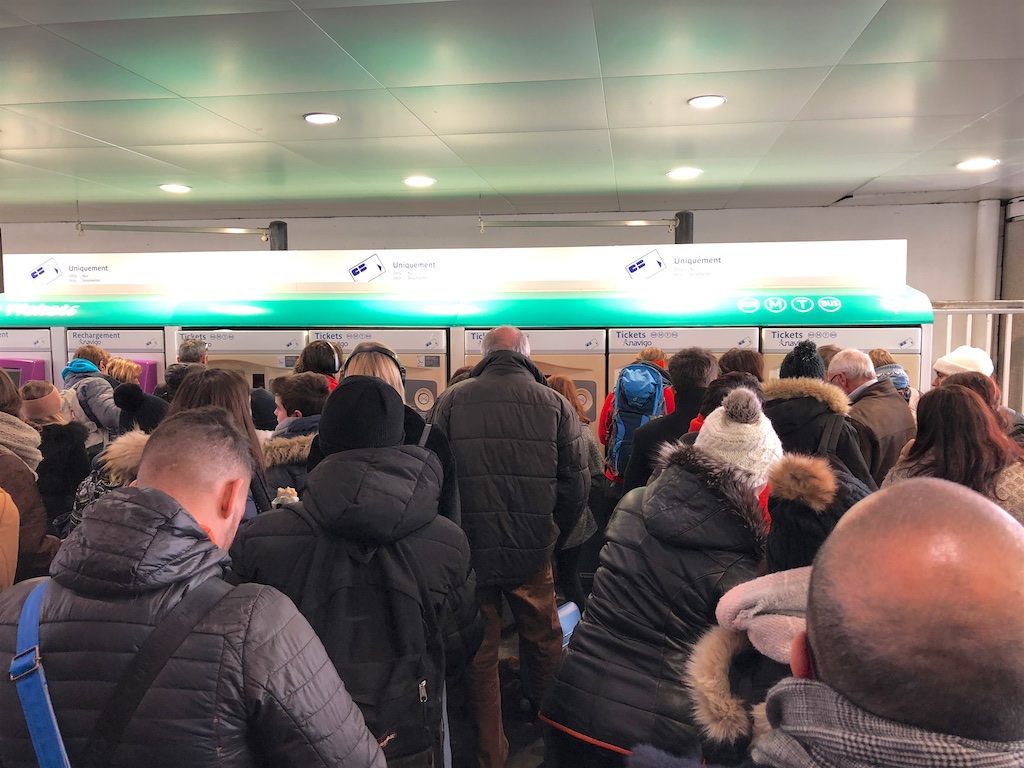 The ticket machines are hilariously retro, like something out of the Buck Rogers TV show, before people figured out that touch-screens would be a thing. I creeped on the guy in front of me so I could learn how to use the machine: You roll the gray cylinder to highlight what you want on the screen and then punch the green button to accept.  Using it was like trying to walk under water or get somewhere you need to be in a dream. 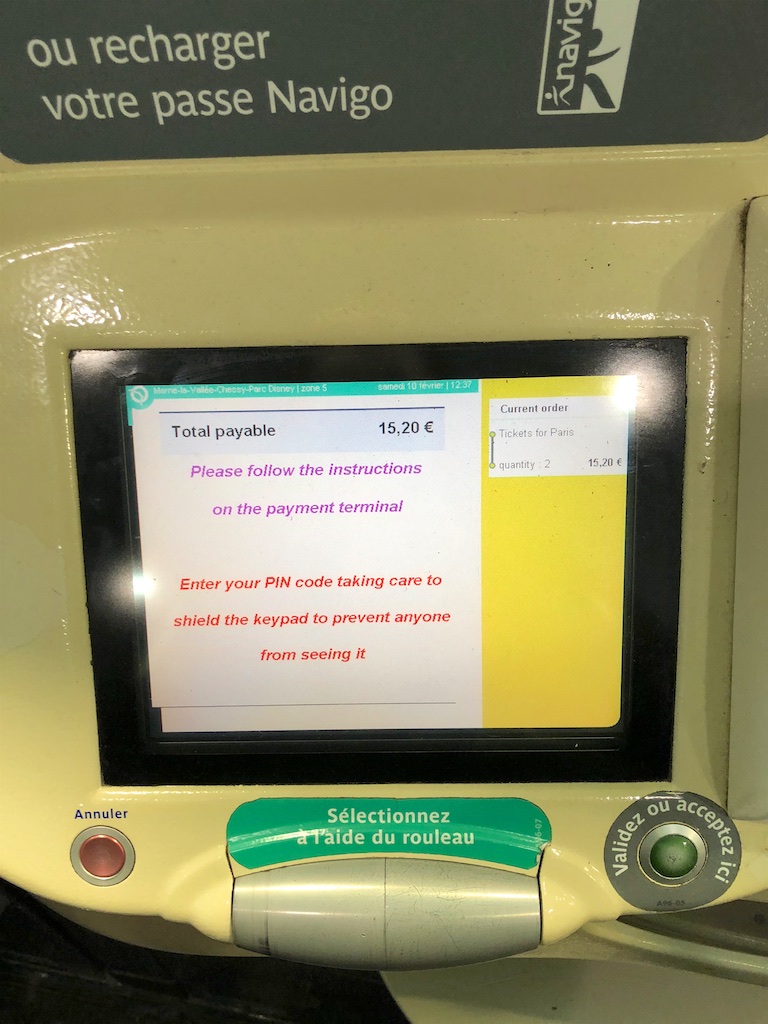 “Also, watch out—there’s an American broad behind you clocking your every move!”

After a few false starts I finally had our RER-A tickets to Châtelet–Les Halles in Paris! We went through these gates and down to the platform. 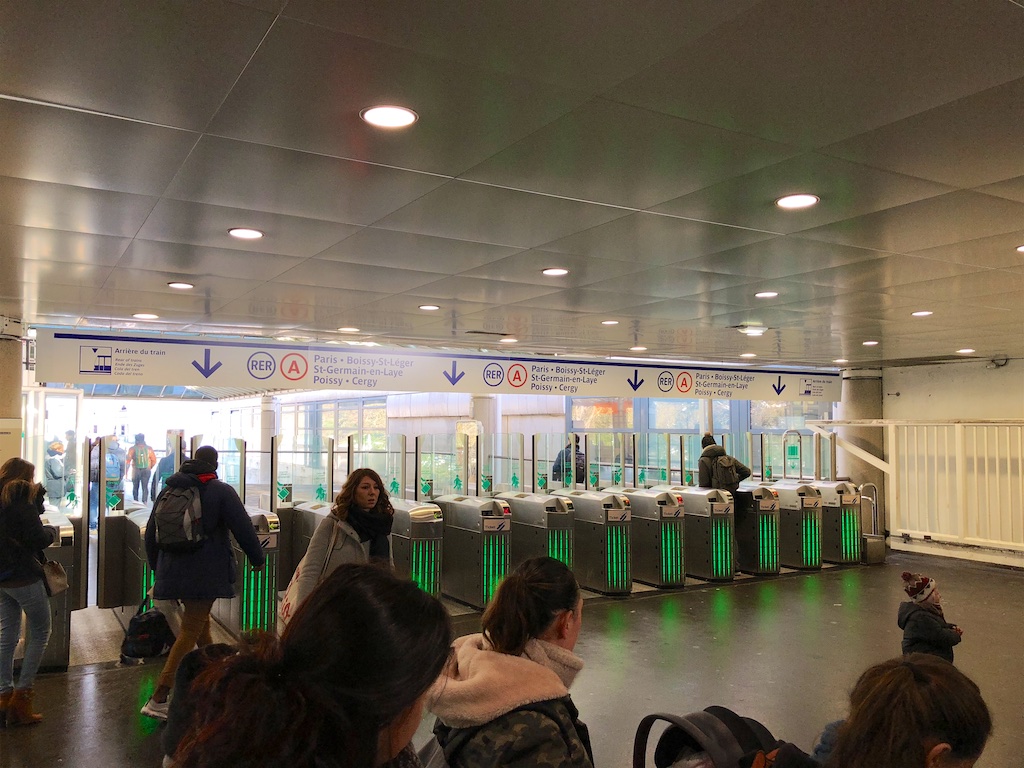 A train was stopped in the station with its doors open, but I couldn’t figure out if it was the one we wanted for Châtelet–Les Halles. A nice man told us that this was the correct train to go to Paris and even took me over to the map and showed me Châtelet–Les Halles on the string of lights depicting stops. 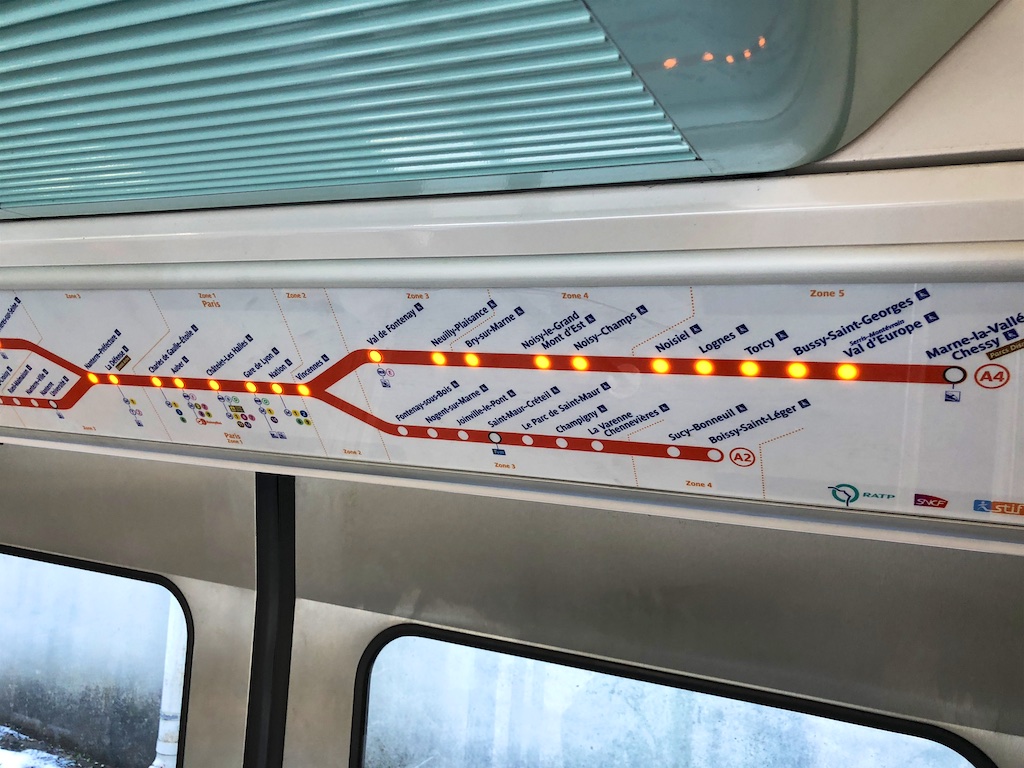 Then it turned out he was a beggar with a sign, going around asking everybody for tips. Patrick got ticked off that he was taking advantage of tourists. But the guy actually helped me figure out what I needed to know, so I was happy to tip him for providing a useful service.

RER-A Trains depart every 15 minutes. The cars have lots of stairs, no luggage racks and no connection to the other cars. So you end up stuck on the one you pick, with all your worldly possessions piled in your lap. 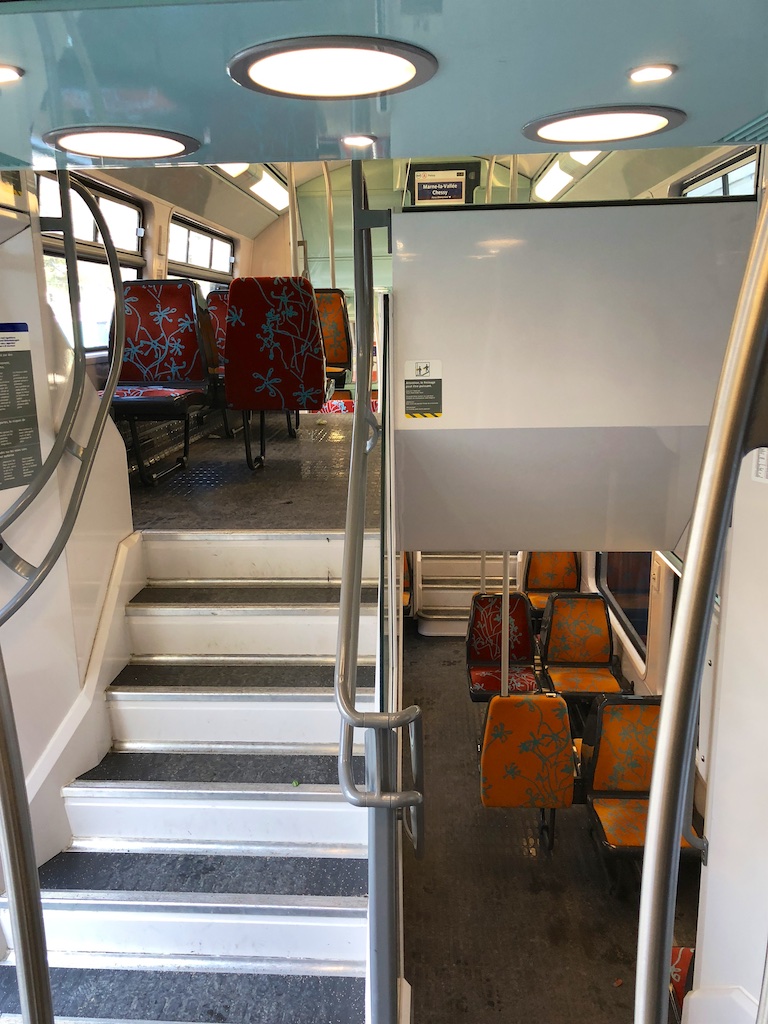 But they also have helpful screens that show upcoming stops in addition to the announcements being made, which was very reassuring to me. 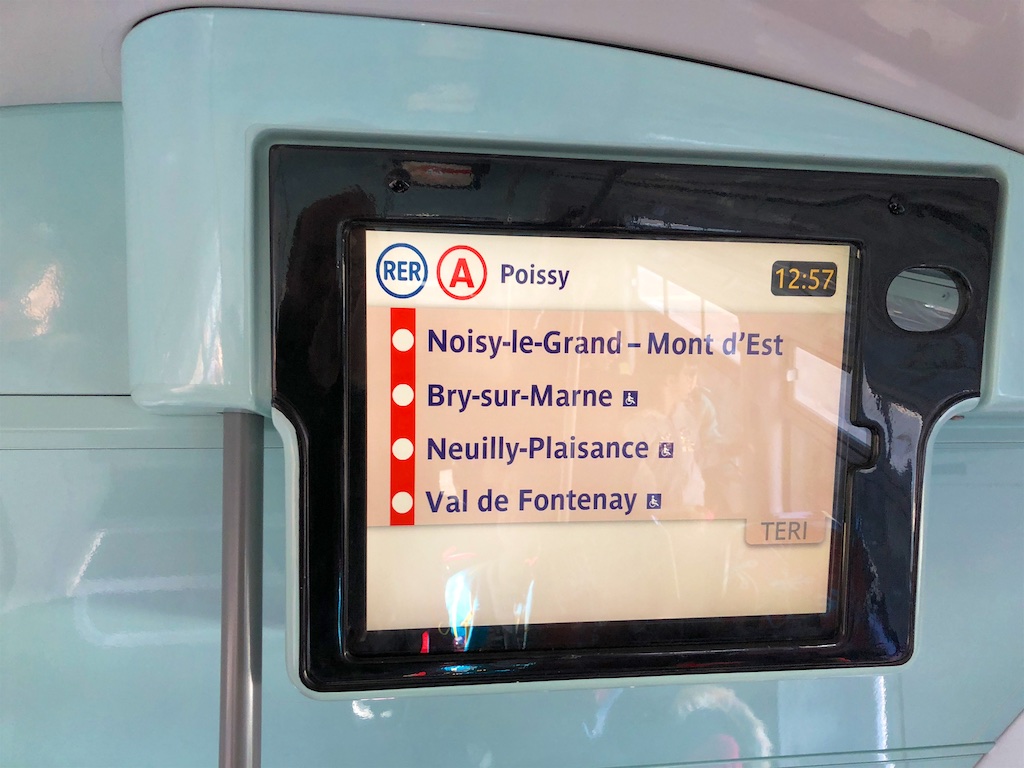 Pulling away from the train station on the RER felt like a big leap into the unknown. We were leaving the security of Disney where everybody speaks English and is cheery and friendly and glad to help. We were on our own!

Knowing to get off the train at Châtelet–Les Halles was the easy part. Even figuring out which exit to use from the largest underground train station in the world was easy, thanks to the CityMapper app.

But actually finding that exit from inside the station proved to be nearly impossible. The RER-A had dropped us off deep in the bowels of the station, just up from the First Circle of Dante’s Hell. We walked and walked and walked toward the exit provided by CityMapper, only to discover it was closed for construction. We walked and walked some more. Eventually we got so thirsty that we tried to get a bottle of water out of a vending machine, only to have our money eaten three times as it happily charged my ApplePay account but refused to actually dispense the bottle!

This was not a very friendly welcome to Paris.

We finally found an elevator, but it terminated exactly one level up, on the edge of a train platform that was completely disconnected from the rest of the level. So we just started walking up whatever stairs we could find, bumping our heavy suitcases behind us. At the top of the 85th staircase…. Daylight!

Then more walking, this time through the snowy, muddy-yet-still-picturesque streets and across the nearly overflowing Seine. Then getting lost again as Google directed us to an alley behind our Île de la Cité apartment instead of the street its entrance was on. Patrick finally found it and we collapsed into the arms of the kindest innkeeper you could ever hope to meet. Her name is Marie Christine, and she rents her son’s apartment on HomeAway because he doesn’t need it anymore. It is cute as a button!

I’d chosen Île de la Cité, the island in the middle of the Seine, partly because it is centrally located (this is where Notre Dame, Sainte-Chapelle and the Conciergerie are located, and it’s considered the birthplace of Paris). But mostly because I’d fallen in love with the idea of having a view of the Seine from our room, and hardly any of the hotels in Paris have that, even the ritziest ones. With the river at a record height that year, we got to see even more of it than we would have normally. You can read more on how I chose this place in my Intro post.

Here’s what the apartment looks like in summer with some help from Photoshop: 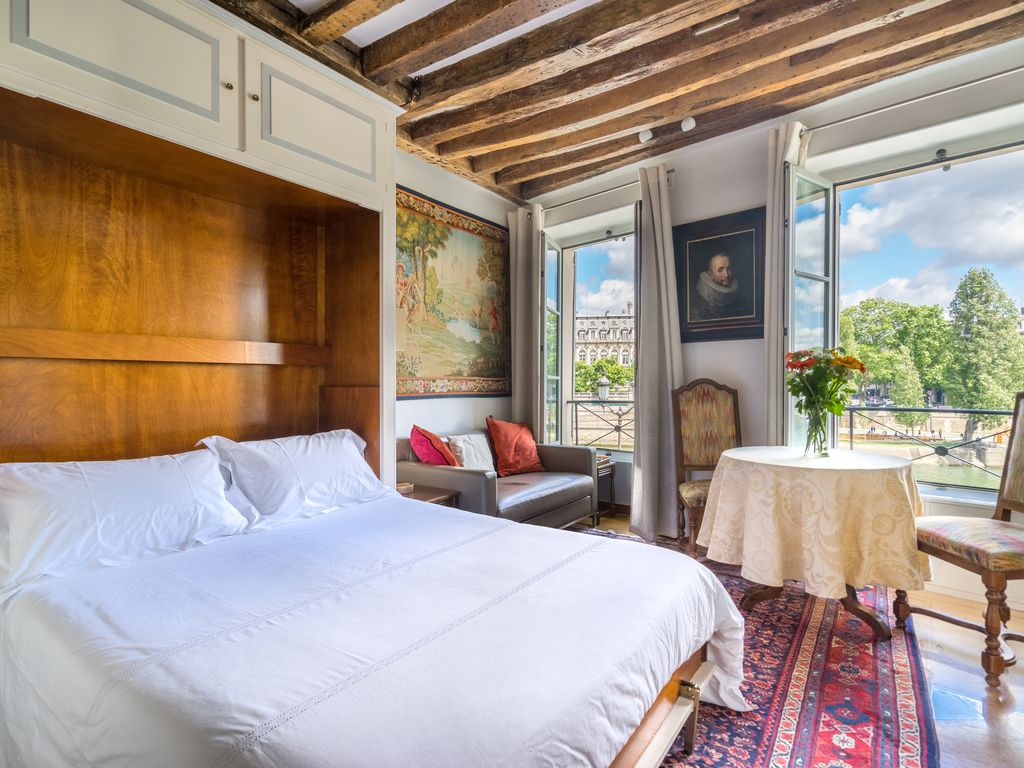 And here’s what it looked like that snowy February afternoon: 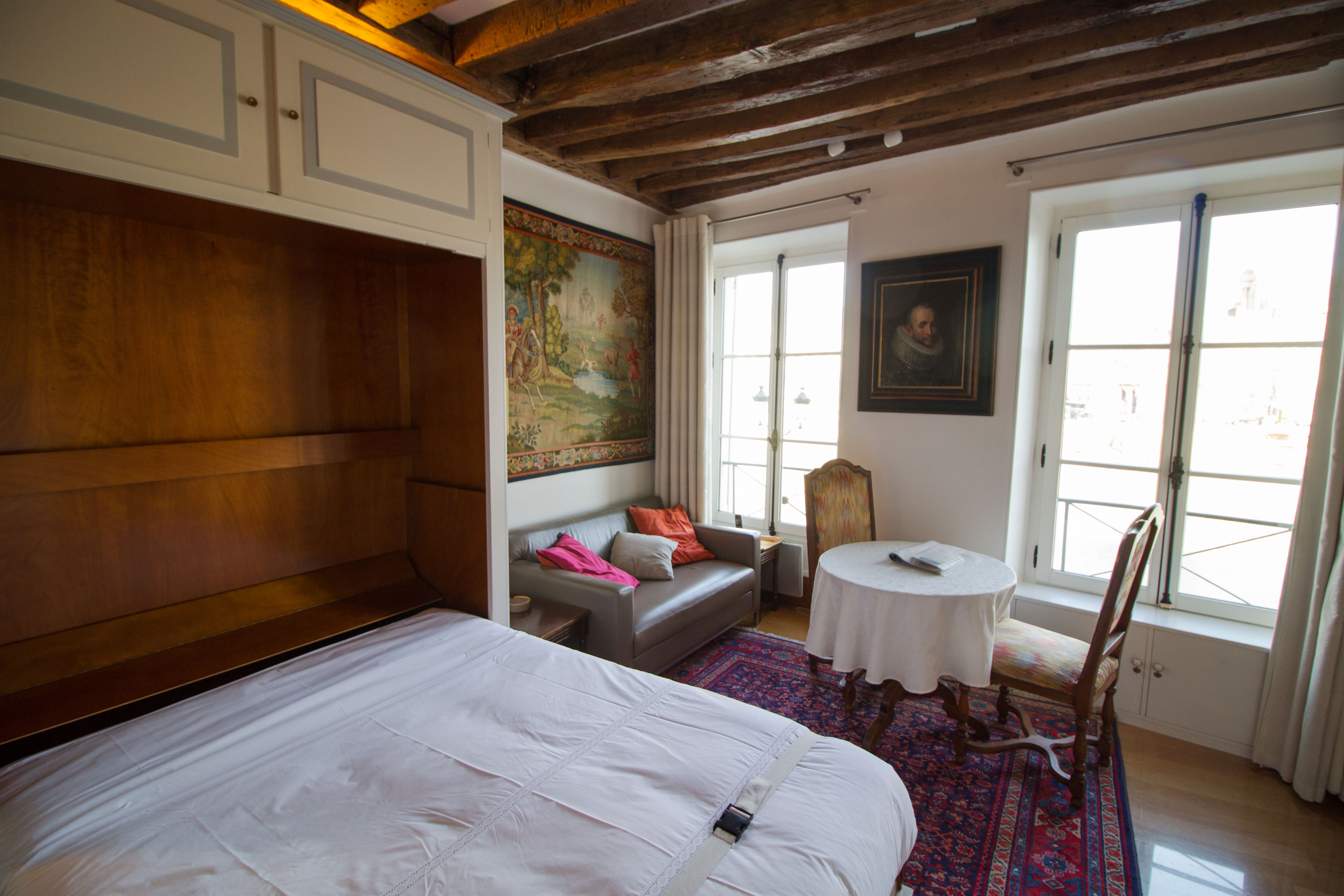 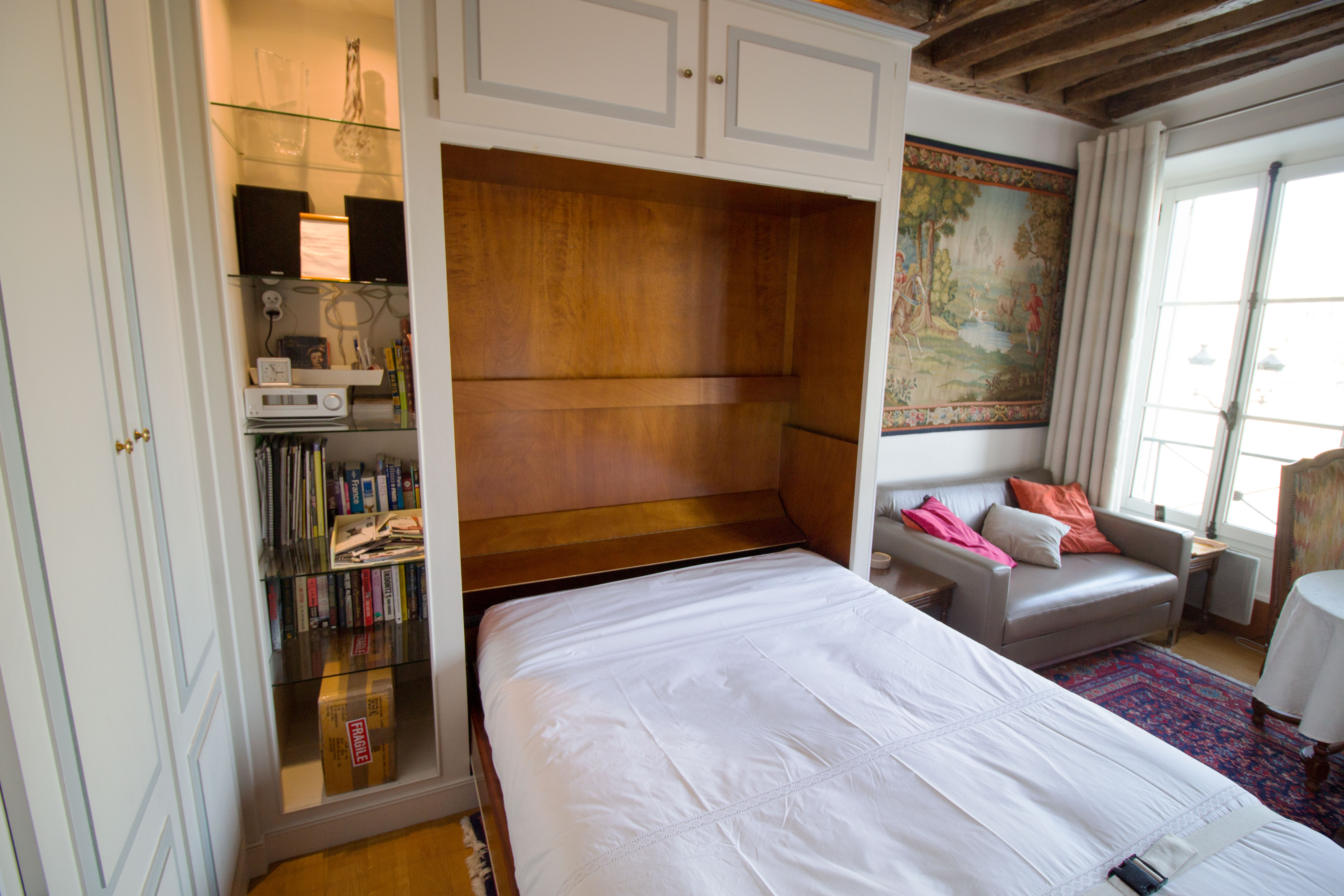 The Murphy bed folds up if you need the space for, like, Twister or something…. 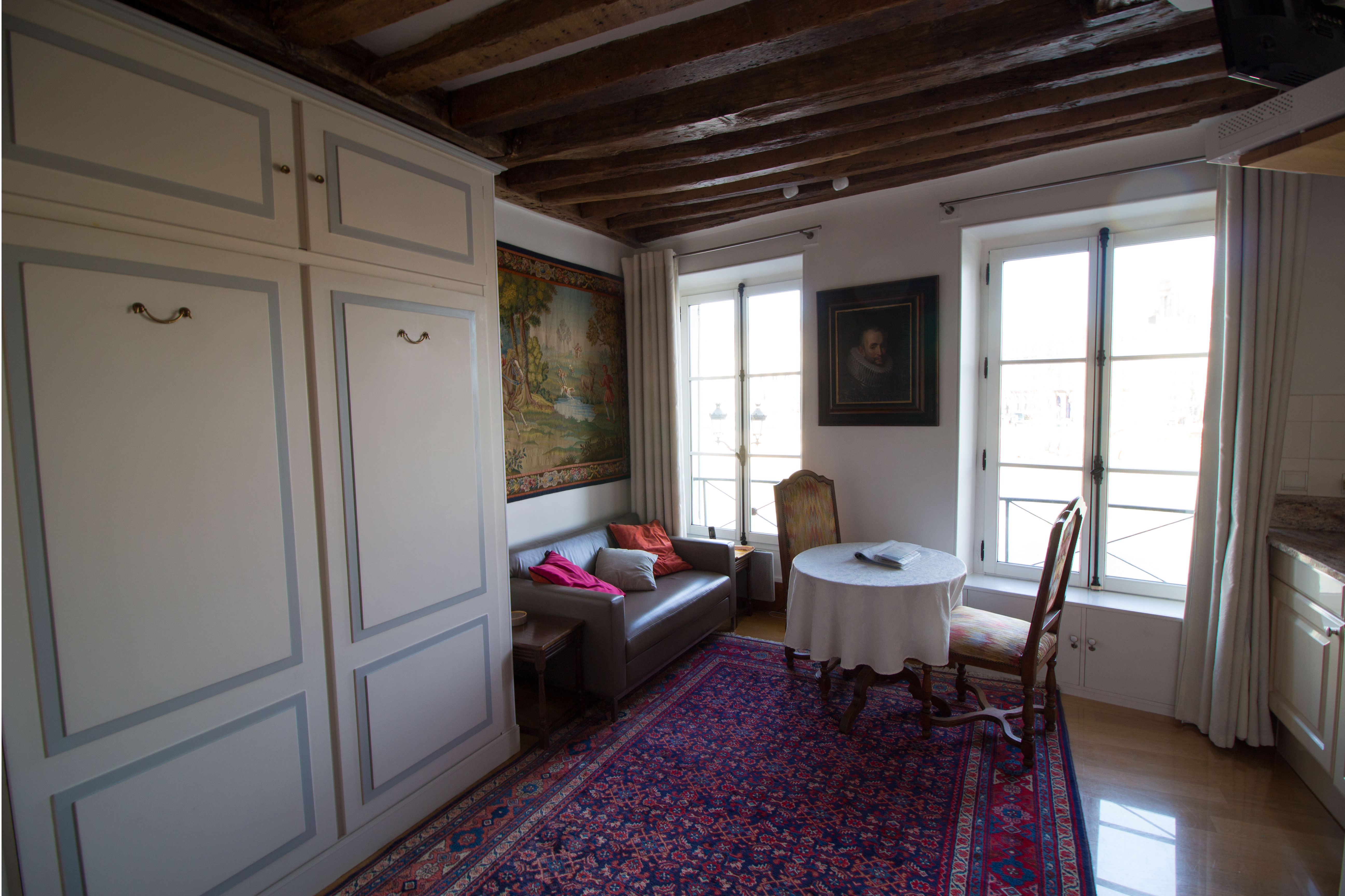 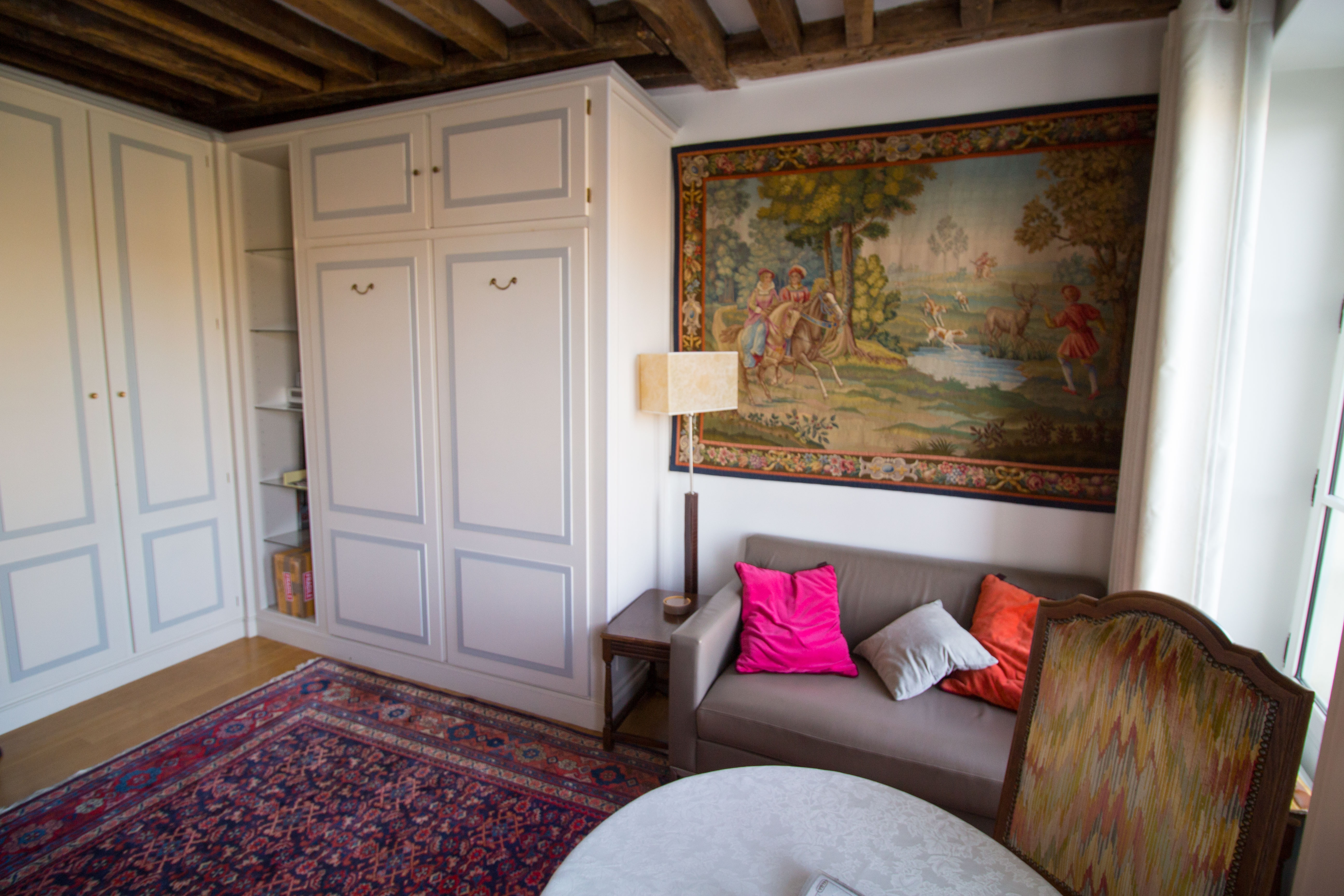 There’s a decent sized closet and lots of shelves. The window below the TV lets natural light into the bathroom, which is nice. 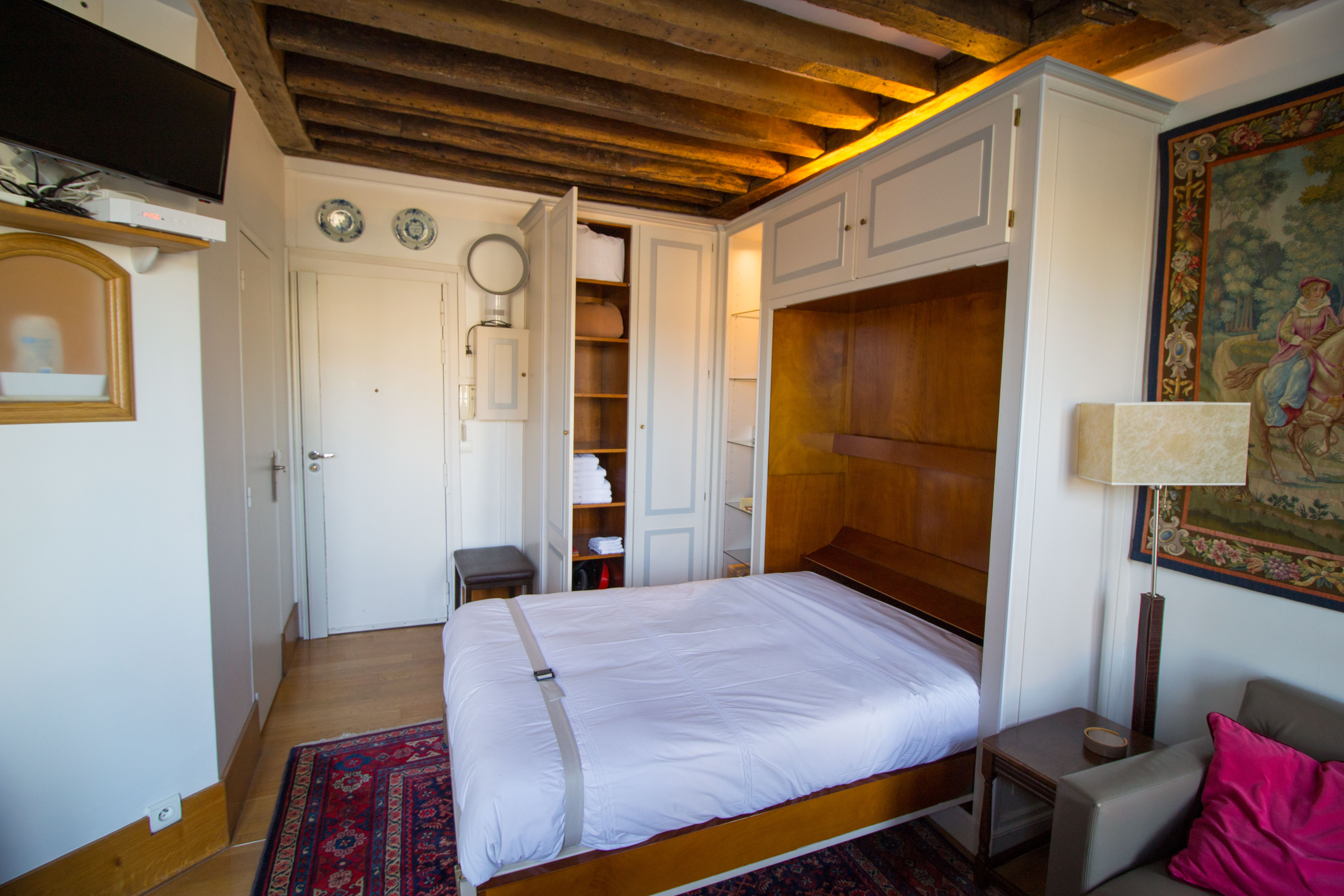 The one drawback to this apartment is that the bed is only a Full (it’s not like they could’ve fit a Queen in this space). I’d convinced myself that it would be cozy and romantic, my desire for a river view blinding me to the fact that I am a GIANT and would need to twist up like a pretzel to keep all my limbs on the mattress. But… C’est la vie! 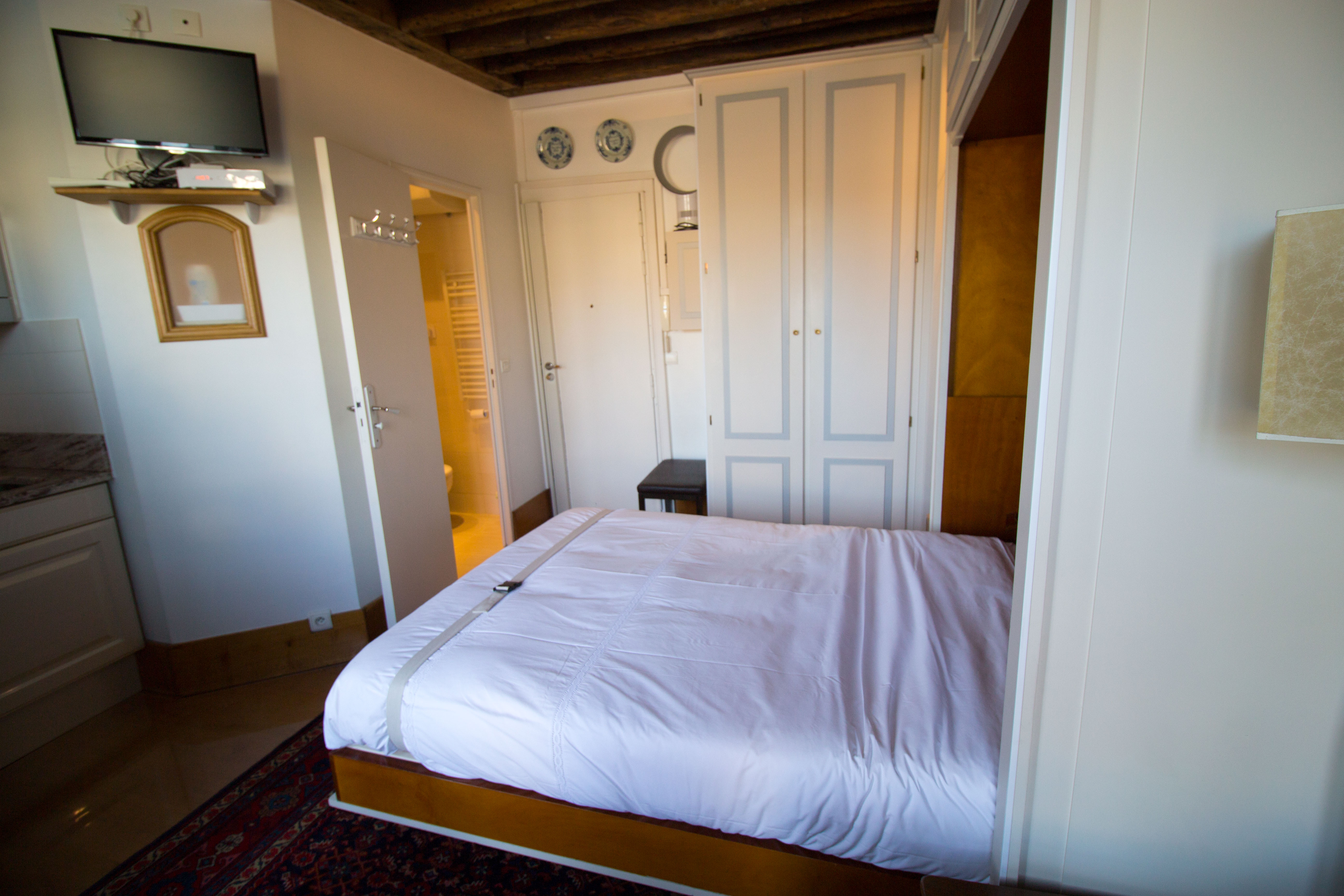 The bathroom crams a lot of functionality into a compact space and felt positively luxurious compared to most of the ones we’d encountered in Tokyo. The first thing I did was take a shower and immediately determine that we should probably buy this place because the water pressure is strong and the water stays hot. 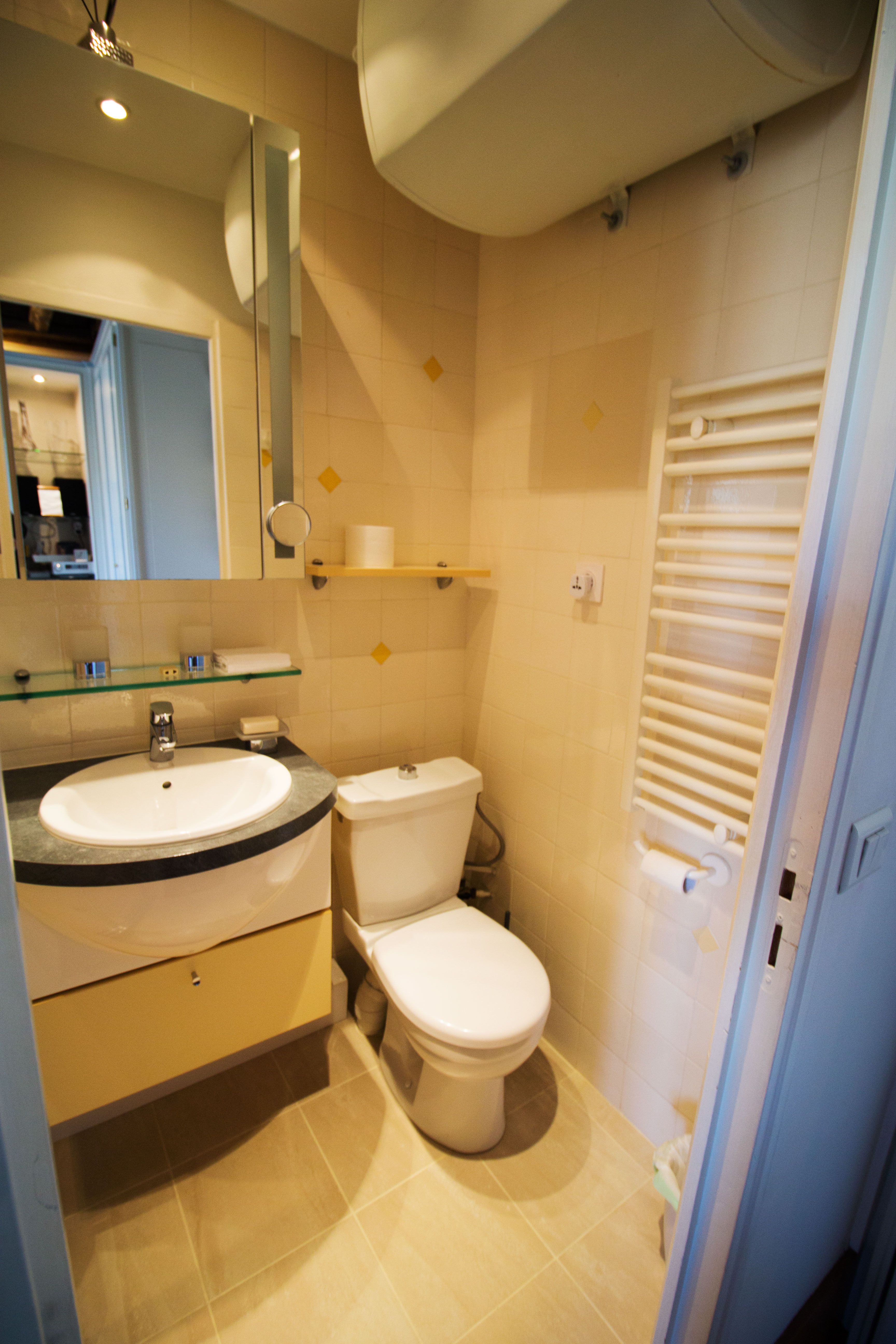 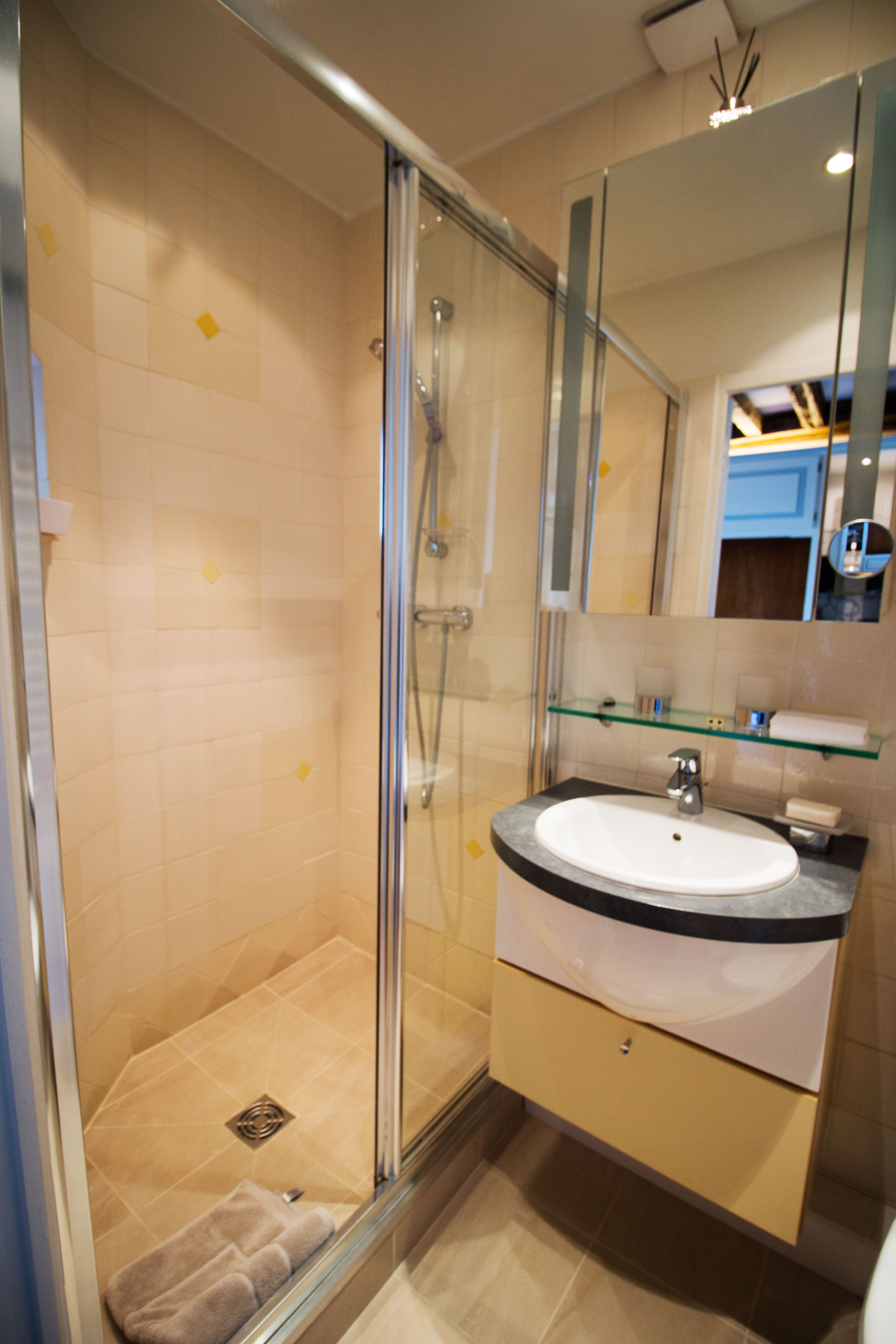 There is a shipshape little kitchenette that has everything you could possibly need—including a combo washer and dryer—in an efficient layout. 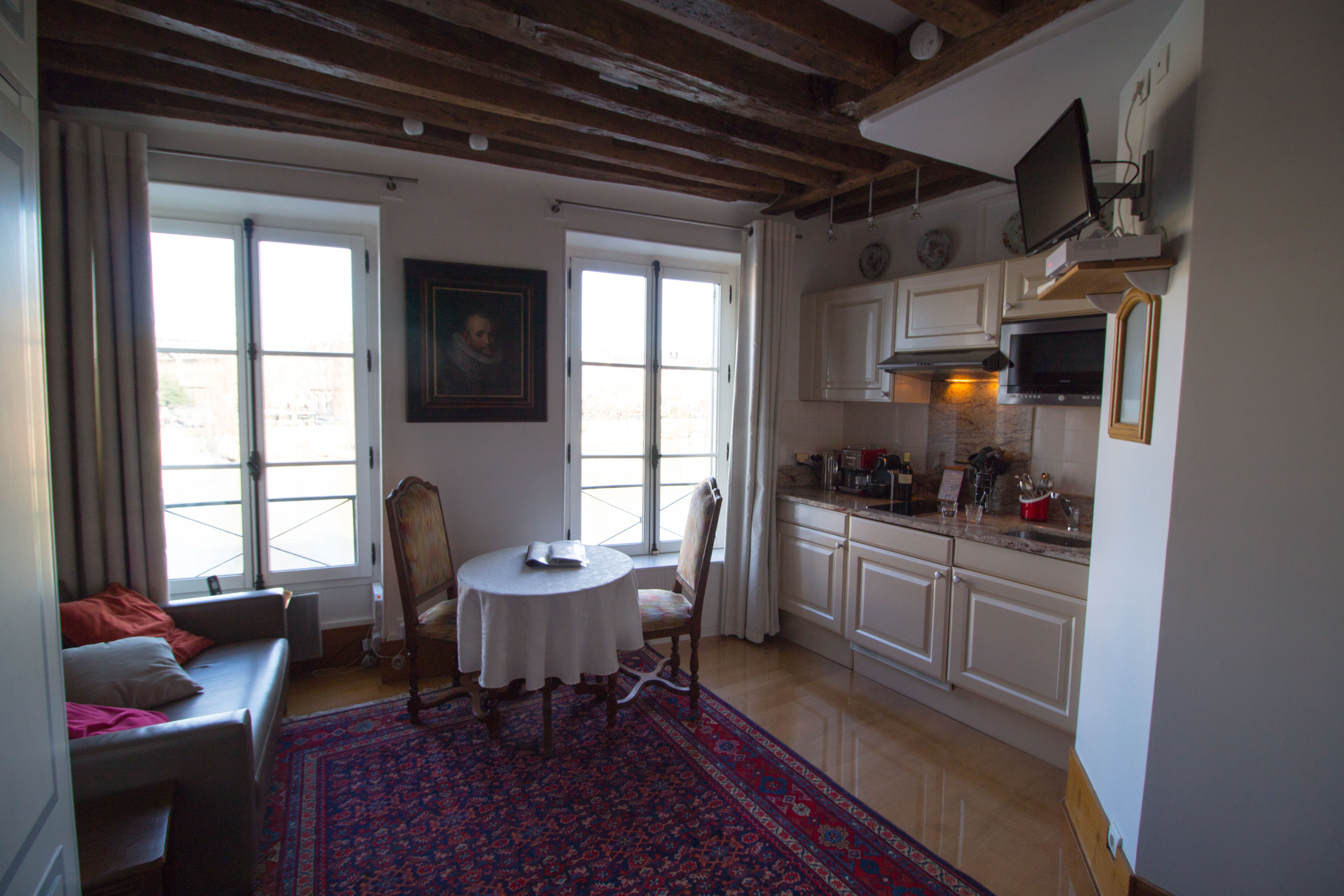 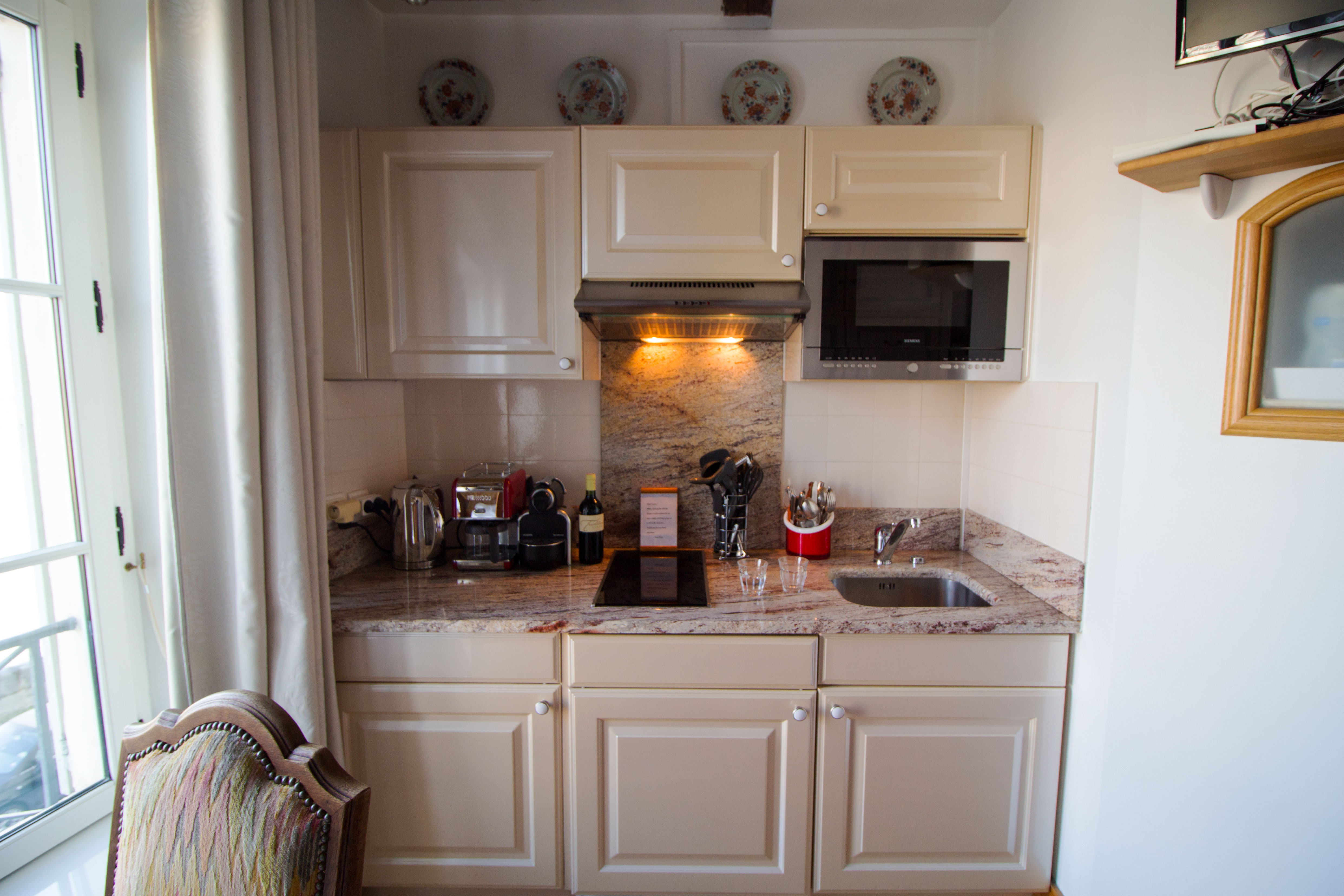 But the absolute best part was the amazing view of the Seine just out our windows! 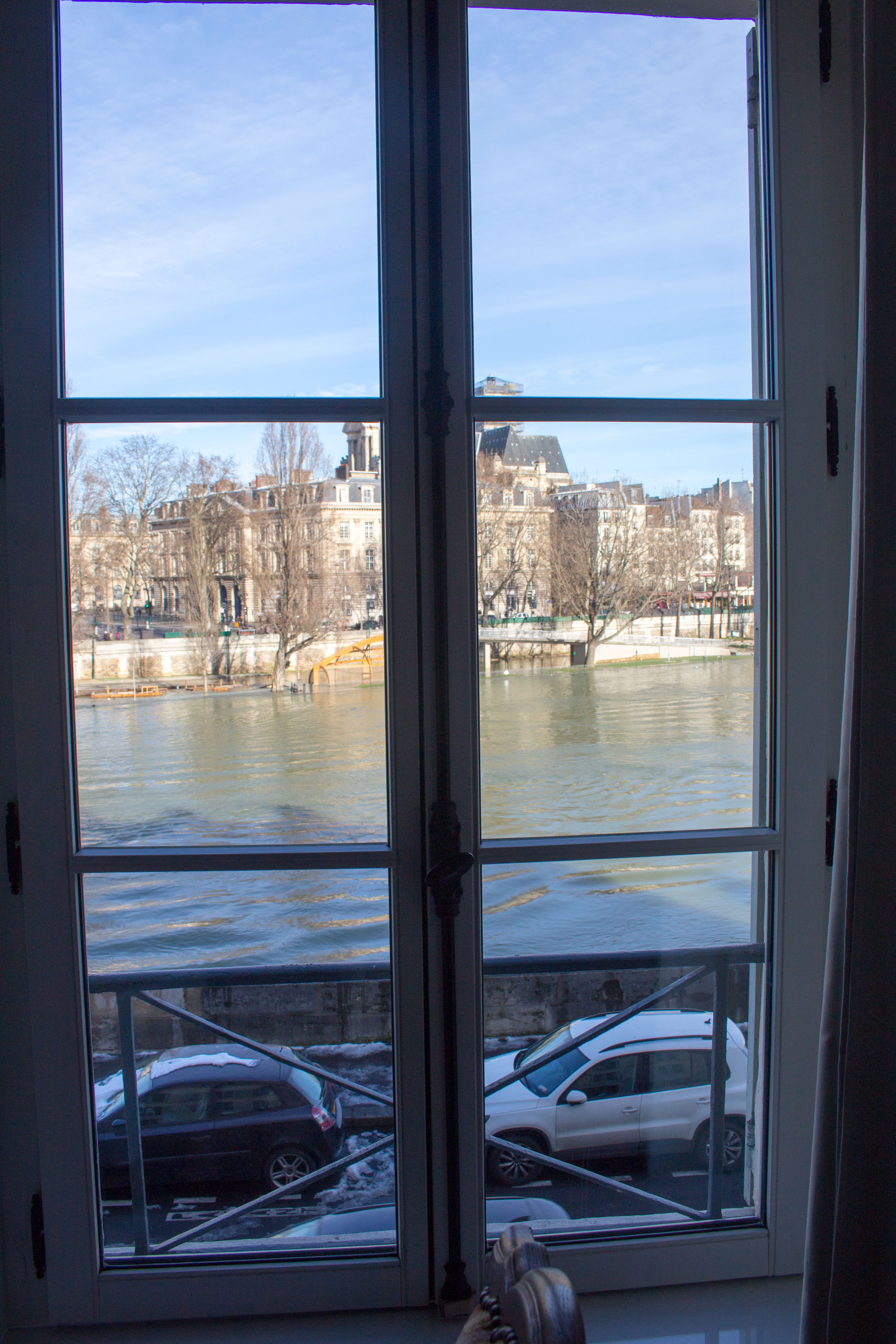 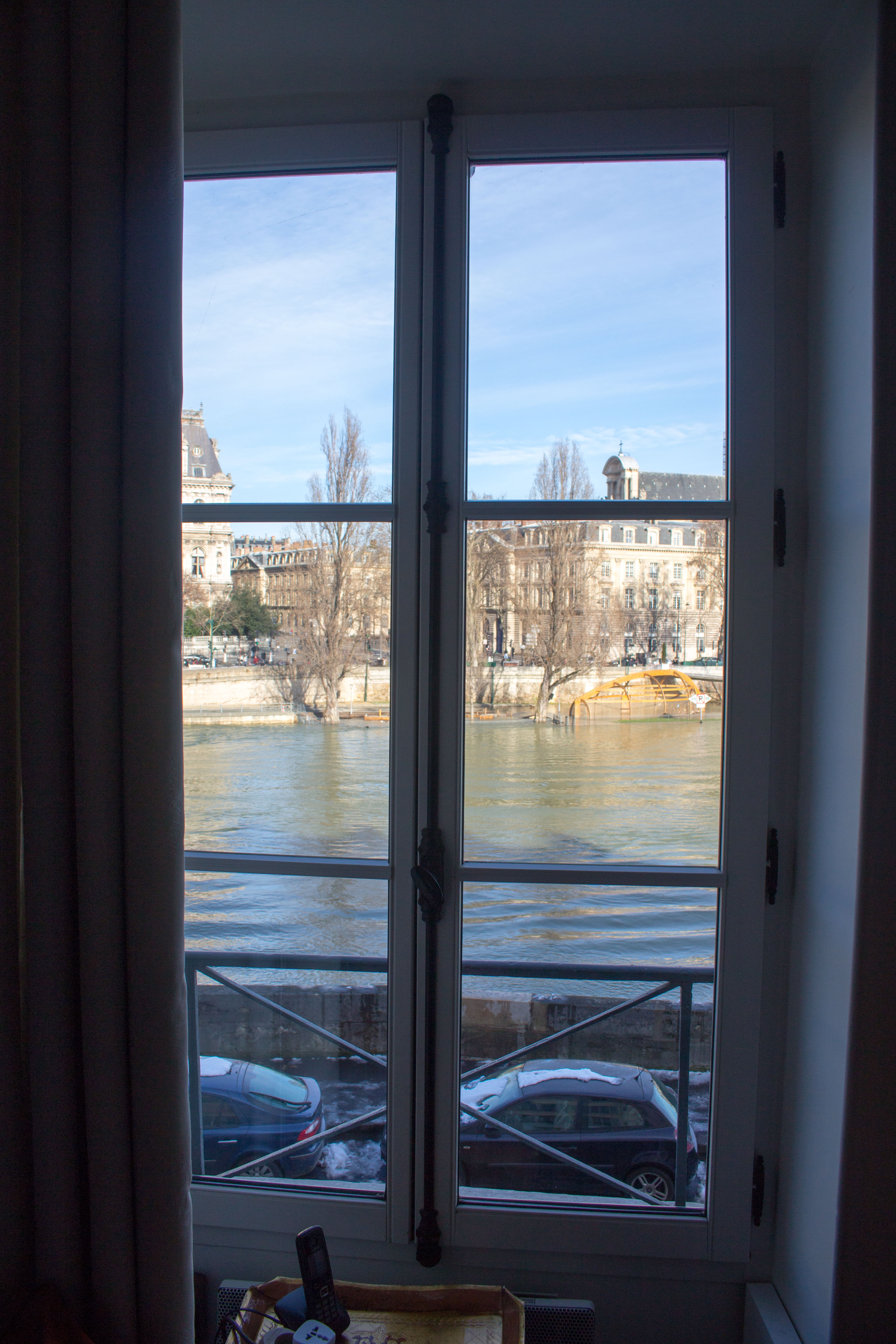 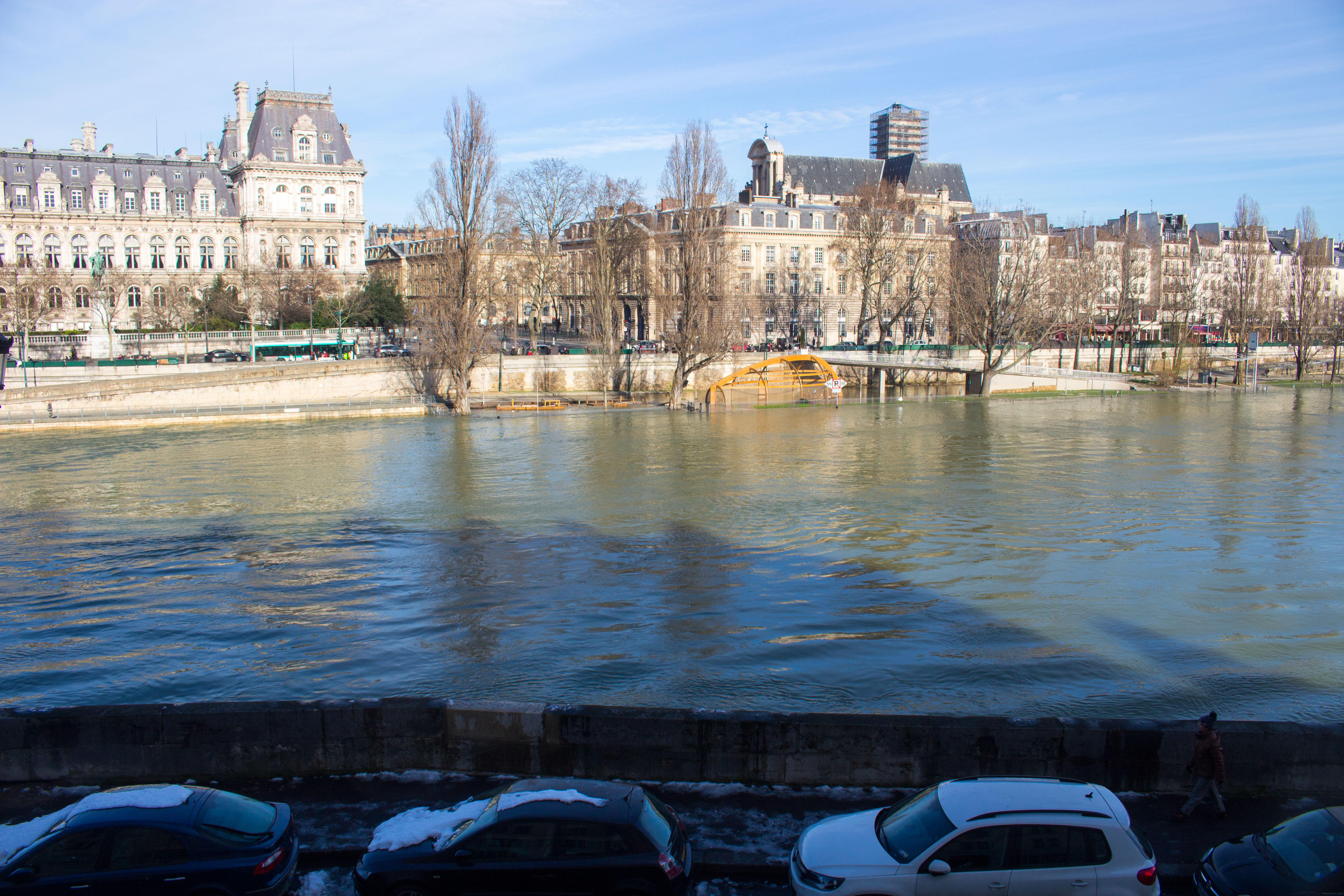 Marie Christine spent at least a half an hour showing us how to use all the different key fobs to get in and out of all of the doors, instructing us on the washing machine and where everything was, and taking us through this nice book of maps she compiled that shows local supermarkets, restaurants and points of interest. She even pointed out some of those points of interest through the window, like Hôtel de Ville (Paris City Hall), which was directly across from us! 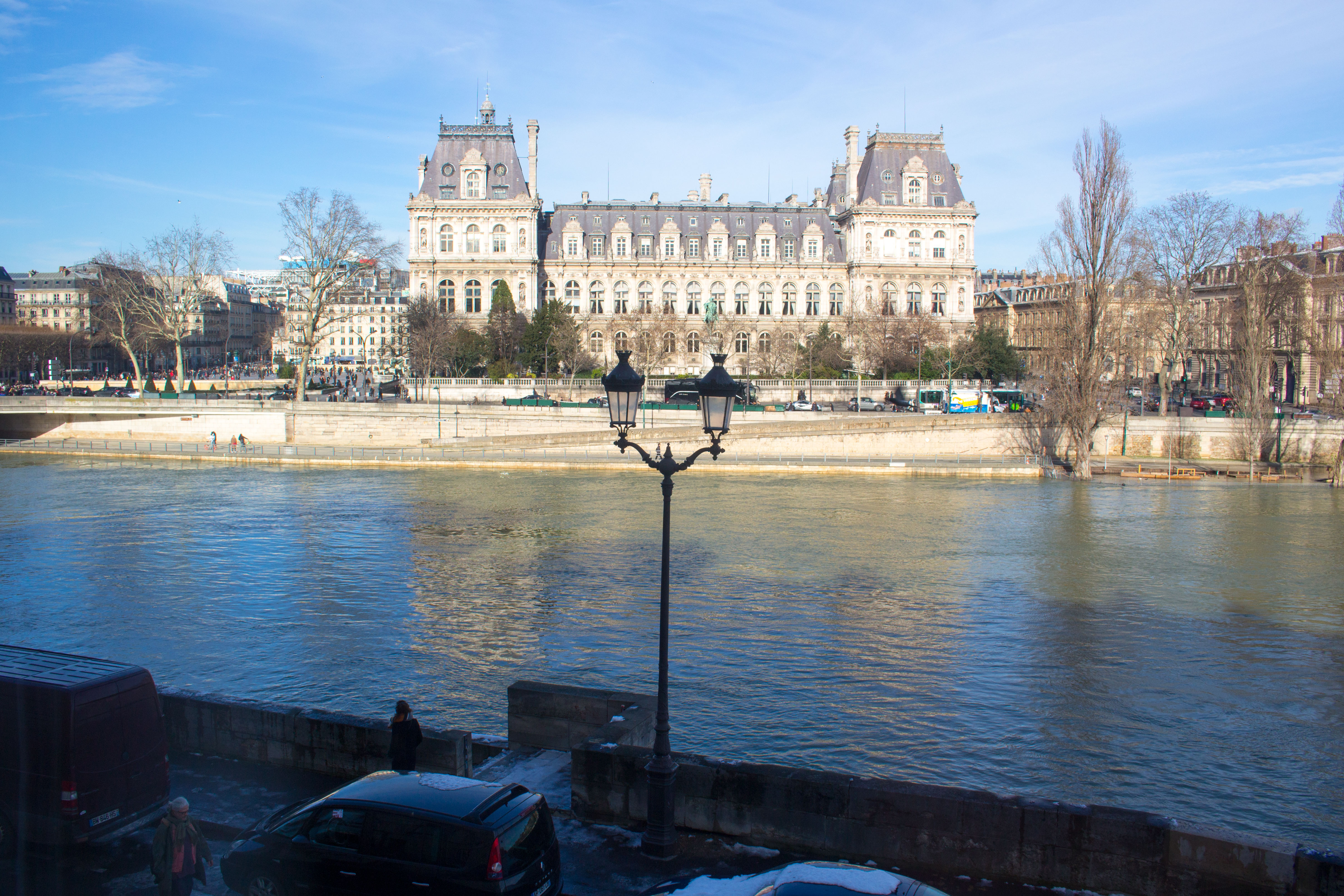 Marie Christine also told us where to go to the post office and even offered to book us a car. And she said we could call or text her anytime we needed something. Afterward, Patrick kept saying, “I’m so glad she’s the first person we met in Paris!”

Up Next… Touring and Attending a Ballet at the Palais Garnier Opera House!