Click here for information on how this party was planned.

Because it was only 29 degrees out on the night of our party, they moved our dinner inside the covered, heated patio of Rose & Crown. However, we convinced them to let us go down to UK Pubside after dinner for the show and our desserts!

Our event guide, Rosie, met us in the lobby of Beach Club Villas around 7:15pm to escort us to UK Pubside. She was very good about keeping the secret from Patrick (although her call to the room a few minutes earlier probably would’ve given it away if he’d had any inkling what we were doing). Rosie brought us to the patio check-in desk for Rose & Crown and led us around the back to our table on the patio. 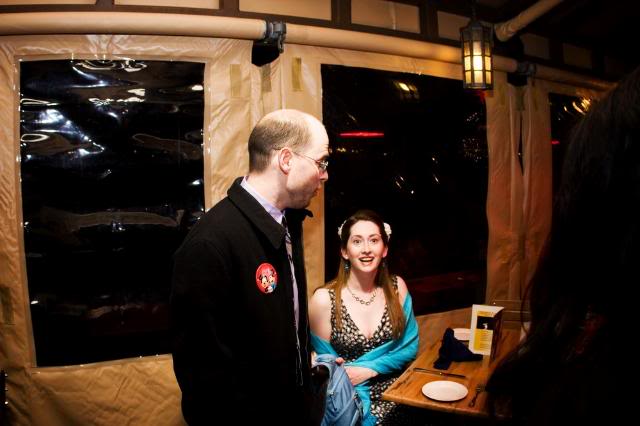 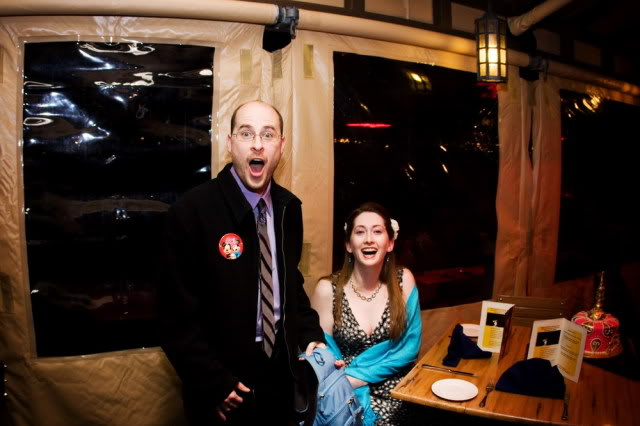 And this is where he sees that the Roots are there to take pictures!

Disney had made us personalized menus (which I kinda expected because our planner had asked me for a photo) and sprinkled confetti on the table. 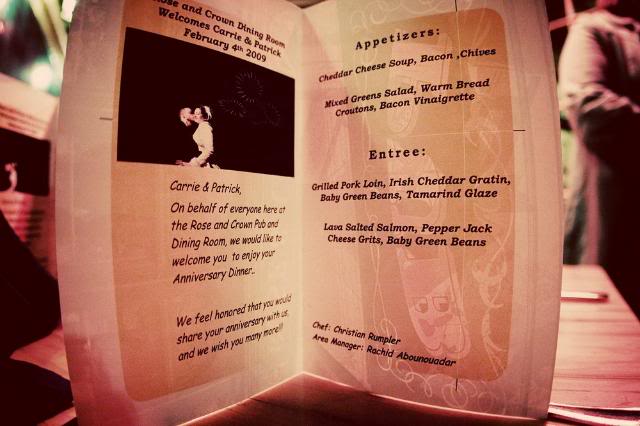 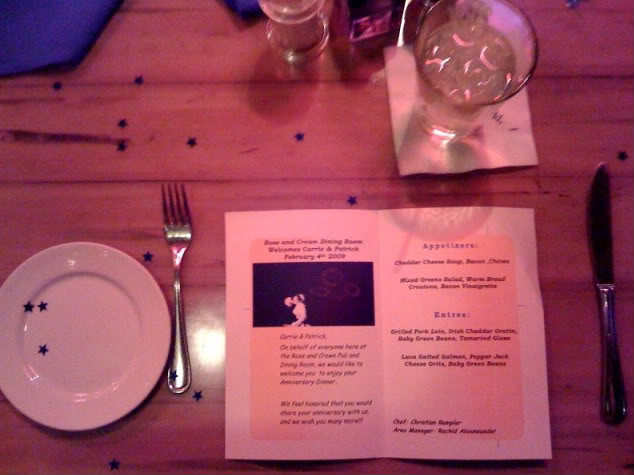 Our event planner, Tess, was there to check on us, as were the restaurant manager, our server, an Epcot lead, and some other official-looking guy. They all wished us a happy anniversary and checked to see if we needed anything else. Then we met the Rose & Crown chef, who wanted to see if we had any special dietary requirements before they sent out the custom menu I designed.

Earlier I had texted Tess about displaying our anniversary cake at the table, since we wouldn’t be sitting at UK Pubside til later. It was gorgeous! 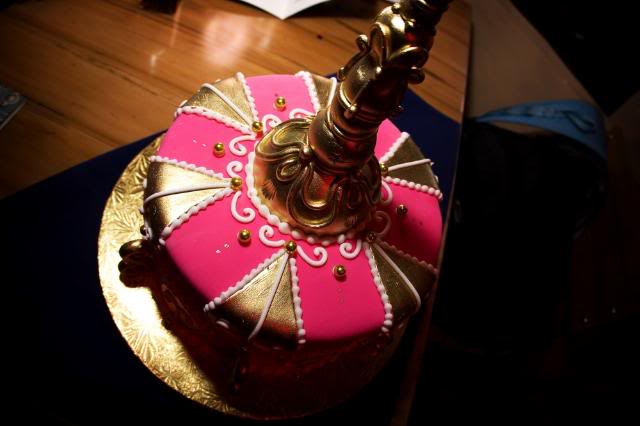 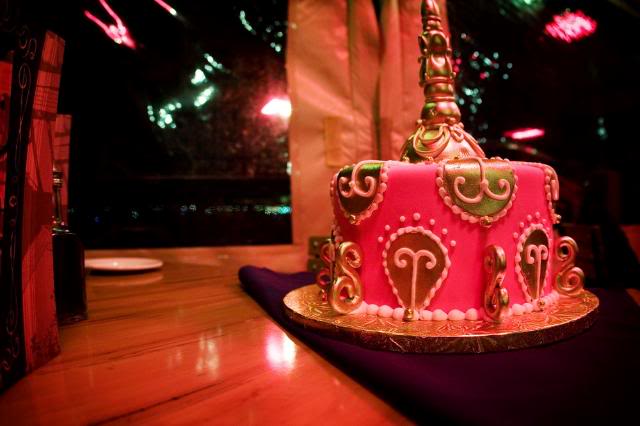 For comparison, this is what our wedding cake looked like: 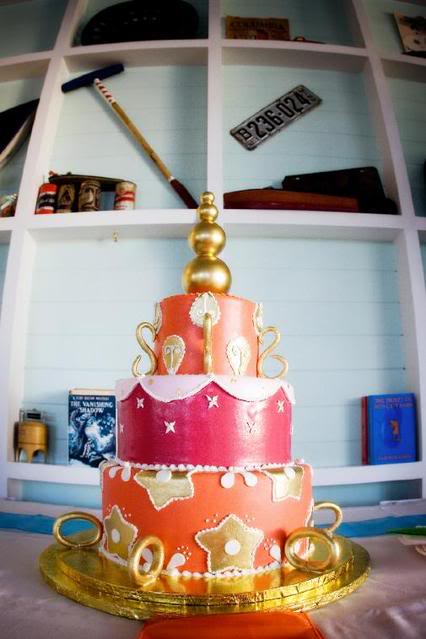 I couldn’t have been happier with our anniversary cake. In fact, the more I think about it, the more impressed I am by the little embellishments they added this time. There were the “handles,” of course, and intricate scallops, the teardrop shapes, and tiny gold dots stenciled on the top. And then there was the topper, which was made entirely out of gold-dusted fondant and took who knows how long to create. It fit the design perfectly!

Unfortunately, we sent the Roots off on a date night, so we only have our crummy point-and-shoot pix of the food: 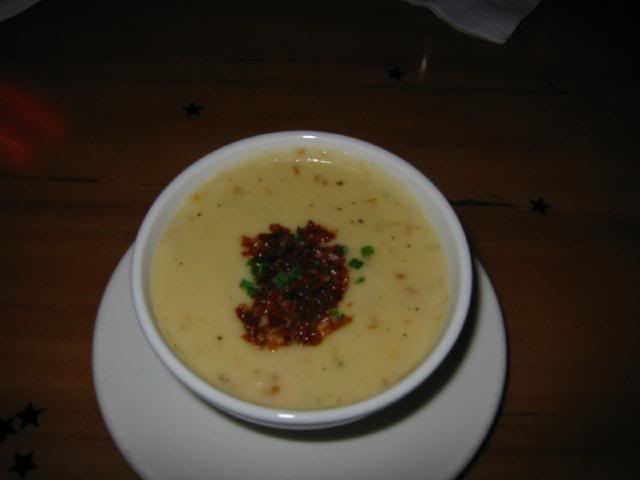 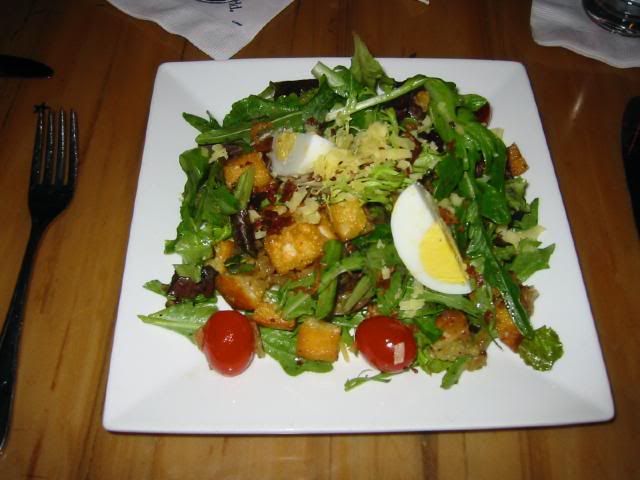 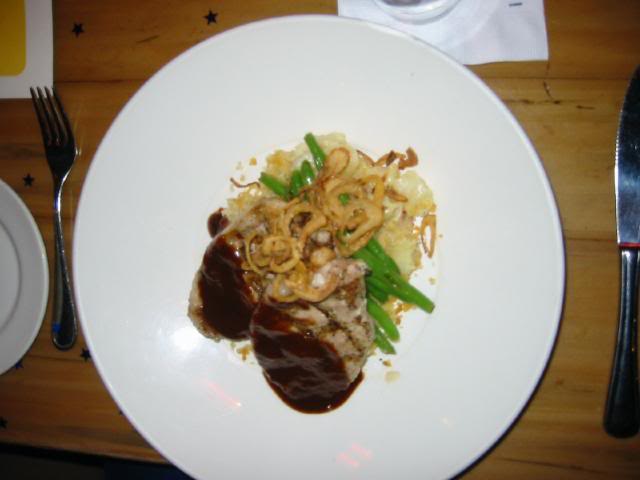 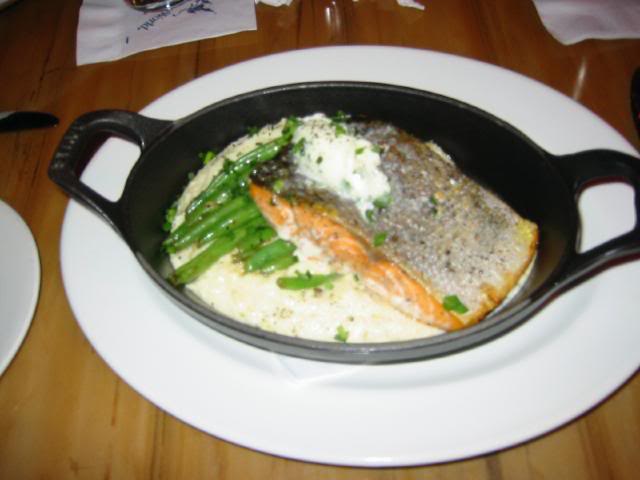 I’d taken a chance on some Rose & Crown dishes when their menu changed right before I had to submit my request. The pork loin was not great—I think it’s just a case of Disney’s using lower quality ingredients at the in-park restaurants—but Patrick loved his salmon, and I got to steal tons of his cheese grits.

After dinner, we met the Roots again down at UK Pubside, where our server had set out our cake and desserts: 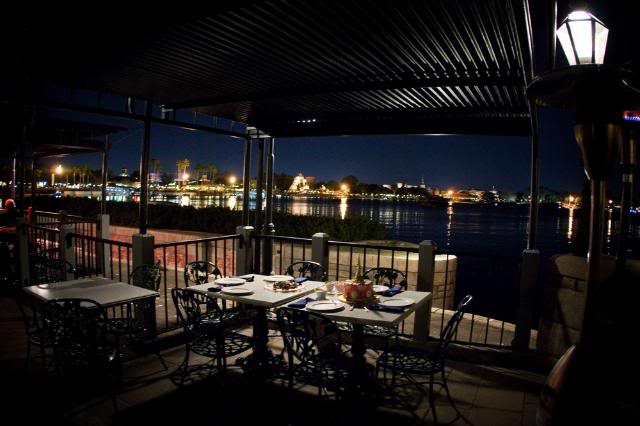 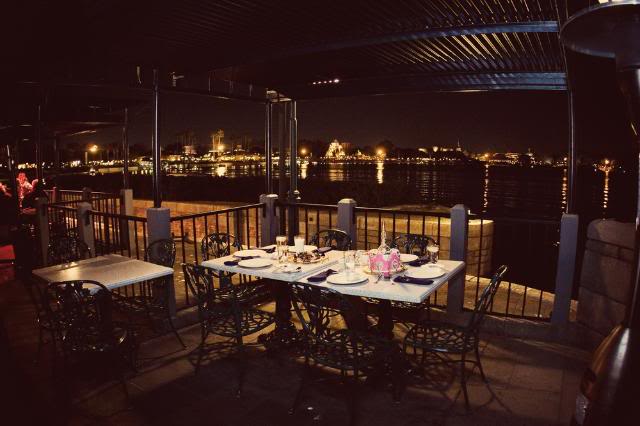 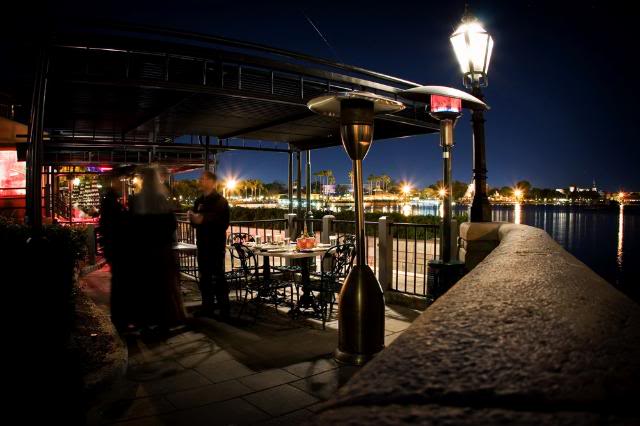 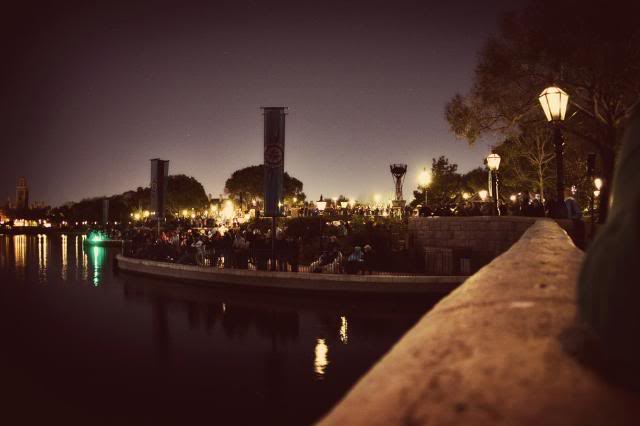 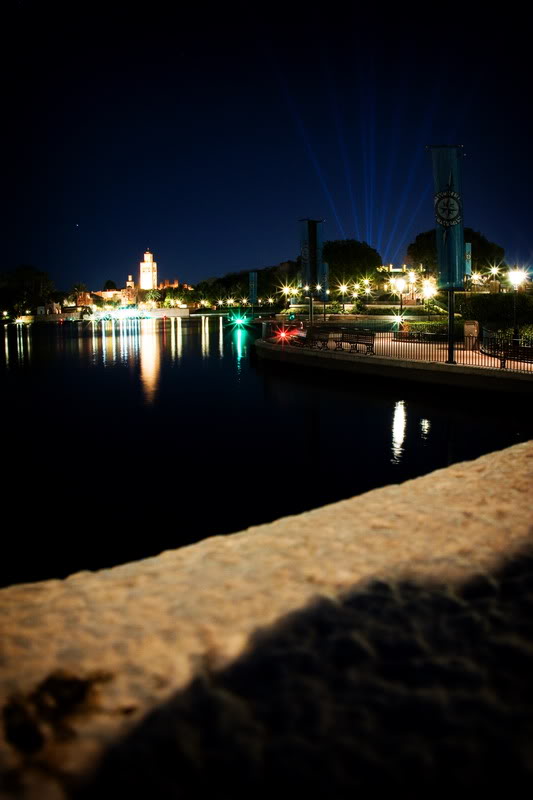 We also discovered Rosie down at UK Pubside, and she gave us some special 3D glasses that show you Mickey heads when you look at light sources—like IllumiNations! 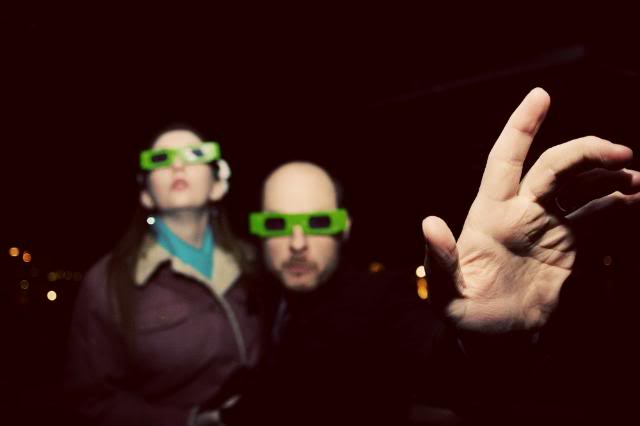 I’ll try not to stick in too many IllumiNations shots, but I wanted you to see how fabulous the view is. The fireworks are HUGE and breathtakingly beautiful. Some of these shots were taken from further back along the wall, but when you watch it, you have a full unobstructed view from under the canopy, like in the shot below. 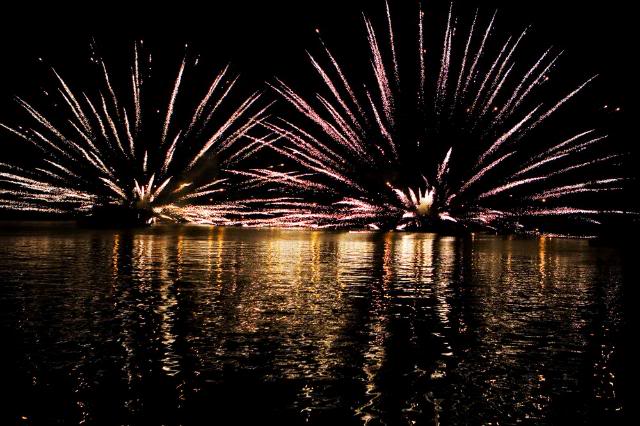 After the show, we cut the cake and had our desserts. They’d forgotten the vanilla ice cream for the cake, but I didn’t remember either until about three days later… They had set out a glass of milk for me, and we ordered hot chocolate from our server (who had to run back and forth between Rose & Crown and UK Pubside, bless him). 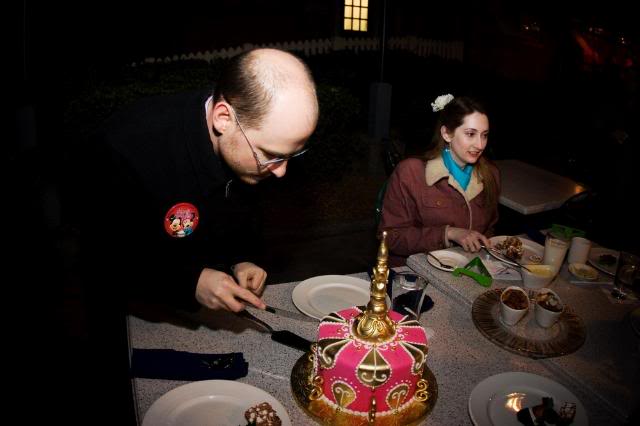 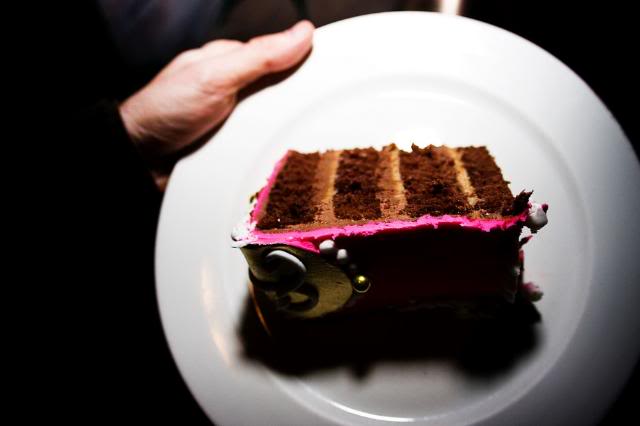 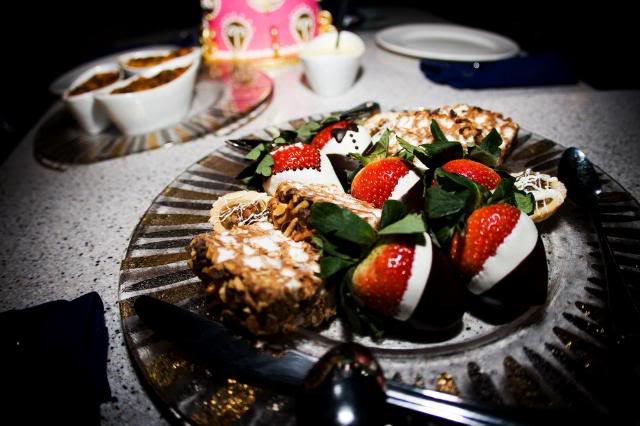 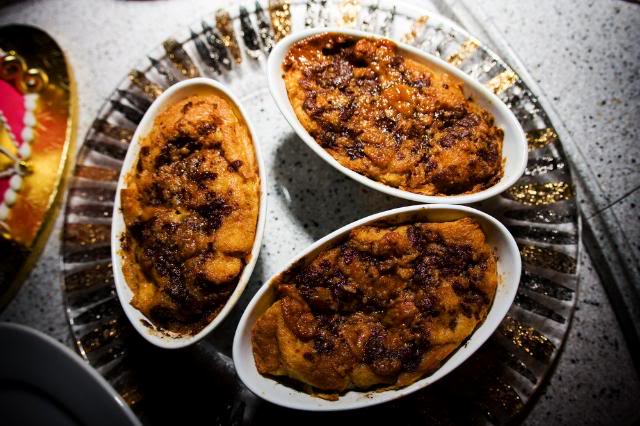 Maybe it was because I had a piece of cake in my tummy the size of a dictionary, but the marshmallow squares weren’t as good as I remembered. Also, the Butterfinger bread pudding was just weird—dry and fake-tasting. But Patrick loooooved the chocolate-covered strawberries. (What about the Panhandle Pecan Tarts, you ask? I didn’t get to try one til the next day, after it had been smooshed to death in the bottom of our backpack. Not the optimal eating experience…)

We got to stay as long as we wanted (the exact words of our server), and I think we left around 10:15pm or 10:30pm. Rosie stood out in the cold the whole time and then graciously escorted us to the International Gateway on our way out—what a doll!

In all, a fabulous experience and one I’ll definitely do again, even if they stop allowing you to add dinner. I was most impressed by the level of service we got from Tess, considering we’d only spent about 1/100th of the cost of a large convention event. I highly recommend it!