You know how they say that you should pick the three things that are most important to you about your wedding and then just not sweat any of the other stuff? Unfortunately for me, every aspect of the wedding falls into the “most important” category – except flowers. I like flowers, but I don’t know much more than that I like my flowers bright and ginormous.

Apparently this means I like dahlias. The bouquet I’d brought a picture of for our planning session meeting with Rose was dahlias, but she said they’d be out of season in February and hard to get. So she layed out all her cards with different flowers on them and asked me to point to the ones I liked, in the hope that we’d find some alternatives. Here’s how it went:

Her: “You already pointed to that one.”

Finally Rose said she’d try really hard to find a grower who could get dahlias in February. I have no concept of floral seasons – I live in California, and I’ve seen dahlias in grocery stores year-round. Rose said if, if, IF she could get the flowers, they’d cost twice as much. However, when I eventually got my floral proposal, my bouquet came to $250 – which seems to be the bouquet cost in all the BEOs I’ve ever seen.

So the bouquet flowers and colors will look like this: 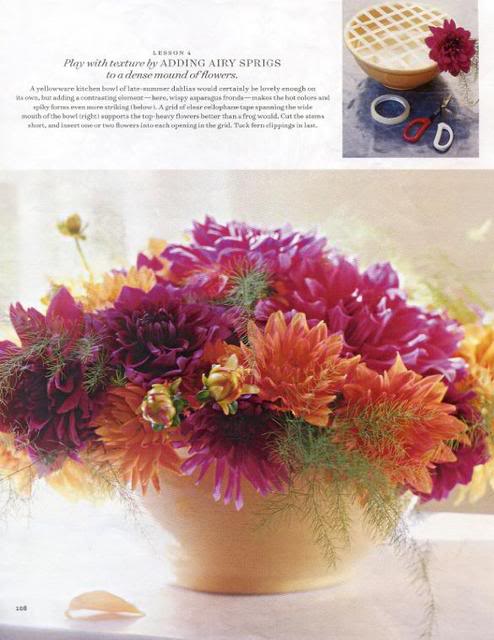 …In the shape of this orange bouquet, with a turquoise ribbon with little tails all around it like in the picture 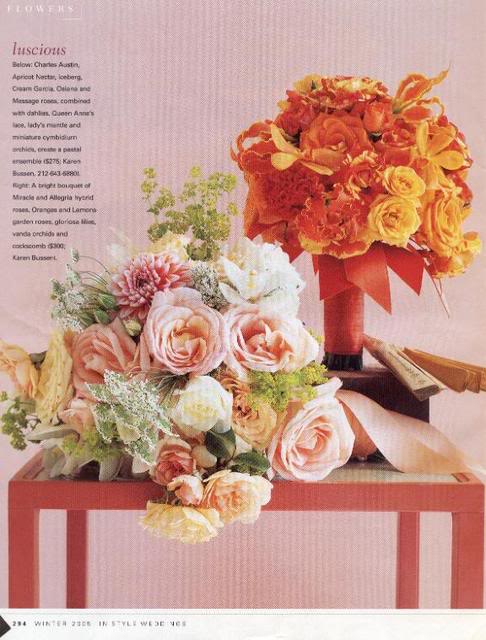 I gave Rose my only picture of the boutonniere I liked, so I don’t have it to post, but basically it’s going to be an orange cushion mum with some unusual greenery that kinda squiggles like a pigtail. I’m not too concerned – I just told her I wanted something unusual and not your standard rose with baby’s breath. 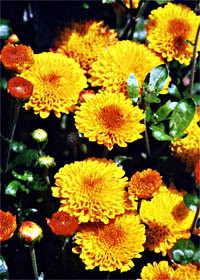 Oh, and Patrick wants a turquoise Hidden Mickey in his boutonniere. We are totally cheaping out on other personal floral – the groomsmen and my dad get boutonnieres cuz they’re in the wedding, but we won’t have any for Patrick’s parents (gulp!). They prolly won’t notice…

I didn’t want any altar arrangements, but seeing the arch in Morocco, it looks kind of bare. I mean, I don’t want it to look like we were sashaying through Morocco with our pastor and just paused at the arch and decided to get married. I want a focal point!

Rose’s first proposal was two potted palms, but with baskets and stands and all it worked out to nearly $400. I can get potted palms at IKEA for $25 apiece, and I’d get to keep those! So now I have Rose working on either vases of banana leaves (which they really should just go get from the Jungle Cruise and give me for FREE) or branchy twiggy things, possibly with Chinese lantern seed pods. 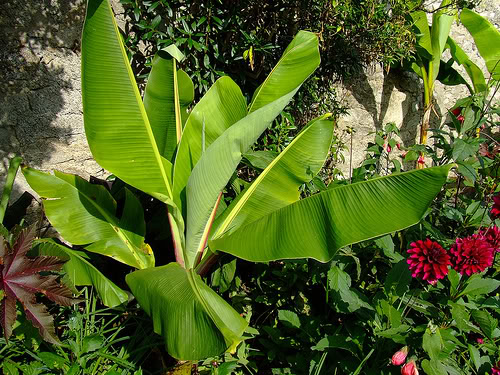 Banana leaves (just to refresh your memory) with bonus dahlias! 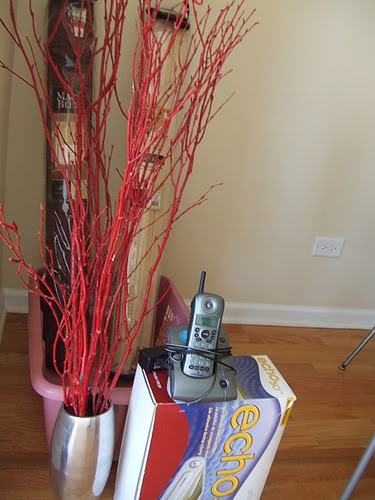 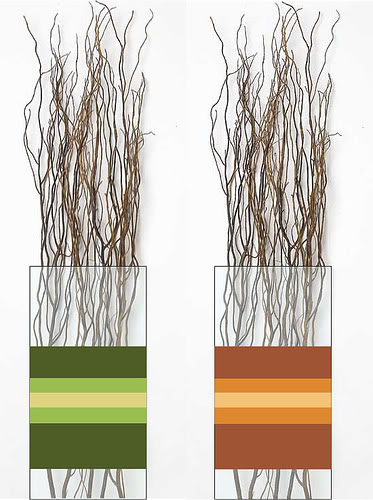 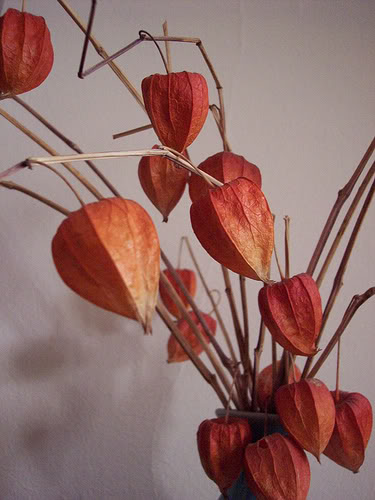 I ended up having trouble communicating to Disney Floral what I want for my altar pieces, so I had Patrick draw it for me: 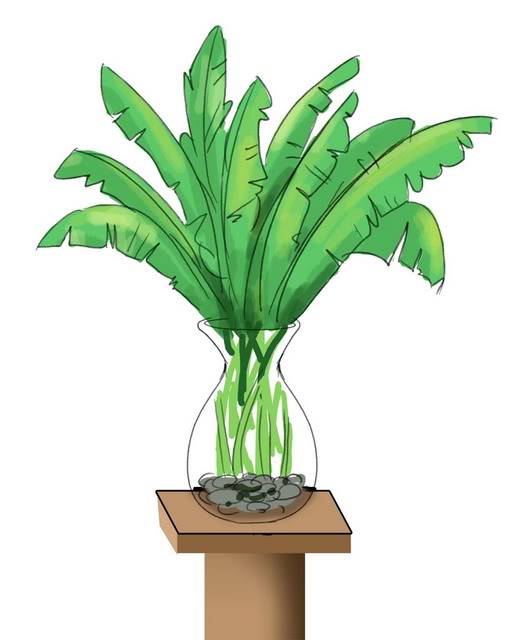 At the planning session, I asked for these lovely centerpieces for the reception. 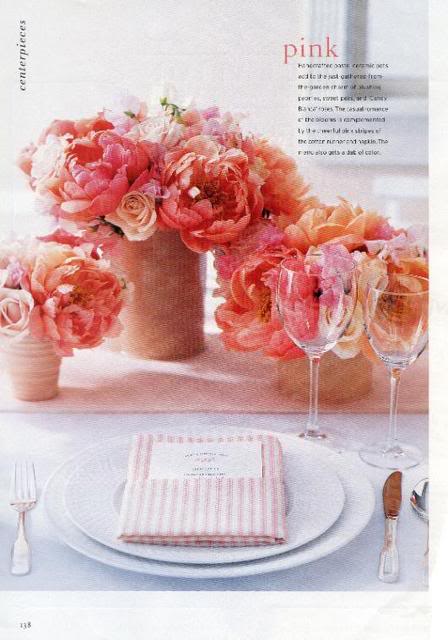 …to be arranged in these blue vases: 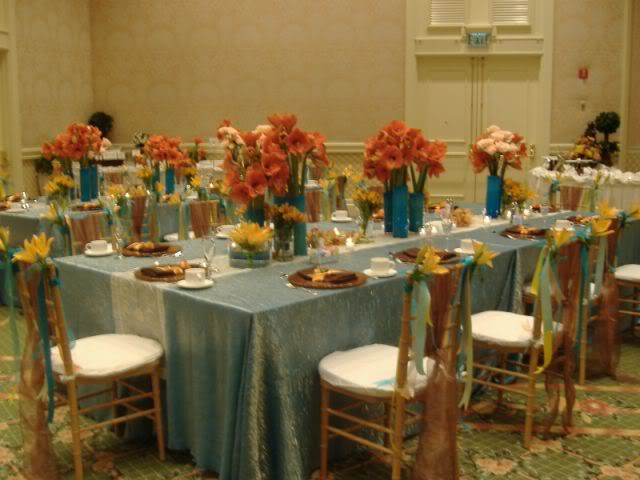 However, I didn’t let myself get too attached to them. When the floral proposal was done, they came in at more than $1,500, so I slashed those babies right out of the budget! I figure the Attic is already so well themed, and the tables are so small, and there are so many things I’d rather have than something as short-lived as centerpieces…

I will have a vase to stick my bouquet in on our sweetheart table, though. Five bucks!

I’m not paying for a floral refresh or anything. I figured I could make or buy a fake bouquet for far less than the $110 that will look good from 50 feet away in those Magic Kingdom photos. Then I found this bouquet for $18! It actually looks a lot like one of my first bouquet inspiration pictures, before I settled on dahlias. It may look super-fake in person – we’ll see – but I’m betting no one will be able to tell in the MK pics. 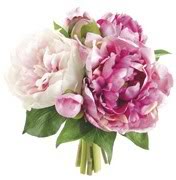 Here’s how it turned out. I bought it at Save-On-Crafts.com and then added two more flowers that caught my eye at Michael’s. 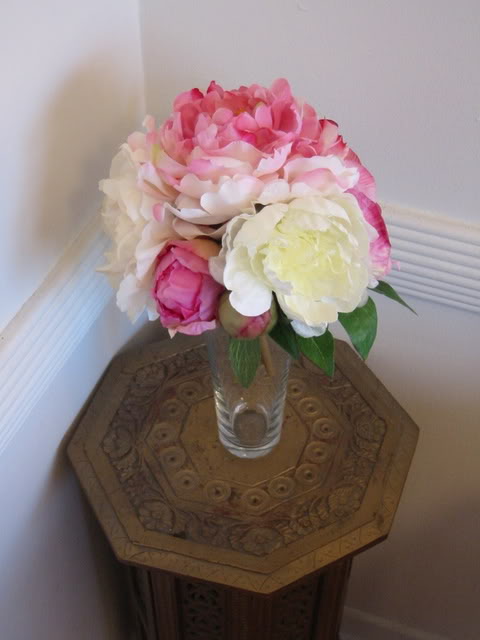 %#[email protected]! chair covers! I didn’t want the black plastic Wal*Mart-lookin’ chairs they give you at Epcot, so my plan was to sub in Disney’s classy-looking wooden chairs at a reasonable $5 apiece. But then I found out they charge you something like $250 just to deliver the wooden chairs – whatever it was, in my case it worked out to nearly twice as much as the cost of the chairs! Grrr…. So I had to do chair covers at $8.50 per chair. I always used to cite chair covers as an example of something ridiculous I would never pay to have at my wedding…sigh… But at least I get to have pretty turquoise and orange gauze sashes on them!

One thing I have insisted on this whole time is fuchsia rose petals scattered in the aisle – not mounds and mounds, just a scattering. I think it will look really nice in pictures. Everybody keeps telling me they will blow away before the ceremony, but I don’t care. If I want to throw away 50 bucks on MIA rose petals, I can! [stamps foot]

Another frivolous thing I should probably cut out but insisted upon because I think they’ll look cool in pictures… I considered doing these and the aisle petals myself by ordering freeze-dried petals from www.flyboynaturals.com, but they sell them in such large quantities that I would only have saved a few bucks. Disney is charging me $3.50 each for little chiffon bags to be placed on each seat, and I won’t have to make the bags myself in the days leading up to the wedding.

They’re going to lay two flat sashes – one turquoise, one orange – in a cross pattern on the cake table. I am not a big fan of “clouding” as they call it – the big swirls of gauzy material one often sees on cake tables. I’m hoping it looks something like this: 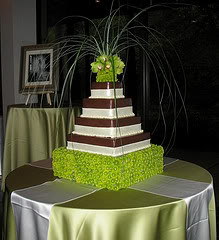