We are flying Patrick’s childhood pastor out to officiate our wedding. I happened to meet him a few months after Patrick and I began dating, and I knew right then that if I were to marry Patrick, this was the fellow I wanted to officiate! We’ve met with him a few times to talk about the ceremony and just marriage in general, and he’s been very respectful of my beliefs (which are different than Patrick’s) and incorporating aspects into the ceremony.

I know this doesn’t help someone who is trying to choose an officiant from Disney’s list, but I would say to be sure the person you pick really listens to you and what you want. I would be horrified if the officiant skipped or mangled some of the parts of the ceremony that are important to me.

Also, if you’re on the fence about bringing someone to officiate or having a friend ordained so he or she can officiate, I say go for it. We are paying for the pastor’s flight and hotel room, but with the wedding discounts and his willingness to take a cheaper flight, it’s not too expensive and totally worth it.

Our only attendants will be Patrick’s brother as Best Man and my brother as Man of Honor, so that’s why I don’t have any pictures of bridesmaid or flower girl dresses. I think bridesmaids are nothing but trouble, and I can say that ‘cuz I’ve been one! They don’t like the dress or they think it’s too expensive, and you have to choose all their accessories and pay to have their hair done and buy them bouquets and give them cheap jewelry they’ll never wear again – ugh!

Having said that, my brother is turning out to be just as high maintenance as any Maidzilla, so here’s what I told him he had to wear: 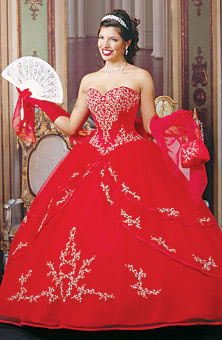