I thought dress shopping would be easy, since I love dressing up, and I thought I had a good idea what kind of dress I wanted. Basically, I wanted something slinky and sexy and modern, not pouffy and lacy and princessy. I wanted Casablanca Style #1831! 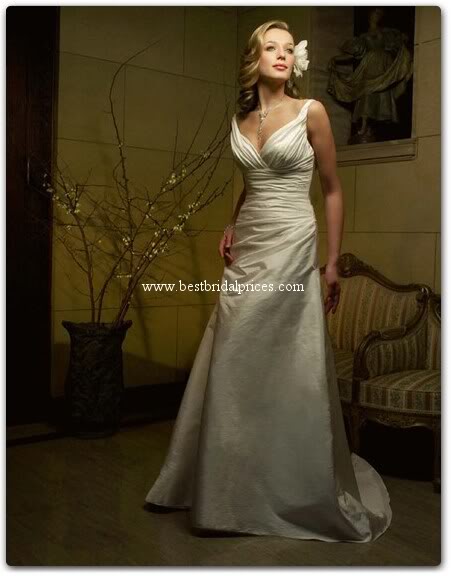 However, when I tried it on, it made me look kinda dumpy and short – and I’m 5’11”! It took me three or four shopping trips just to stop feeling weird in a big formal gown, and all I could think was “Why does it have to be white?” This is partly cuz I’m super-pale and look bad in white (and worse in ivory!) and partly because I was getting tired of the Wedding Industrial Complex’s notions of what a wedding dress should be (white, cheaply made, exorbitantly priced).

Also, at less than 6 months out, I was running out of time to order dresses from certain manufacturers. I think I tried on about 70 or 80 dresses over two weeks. I found lots that looked OK, but nothing that screamed “The One!”

This one was nice, but I decided the skirt would look dated when I looked back at my wedding pictures.

(Also not THE dress) 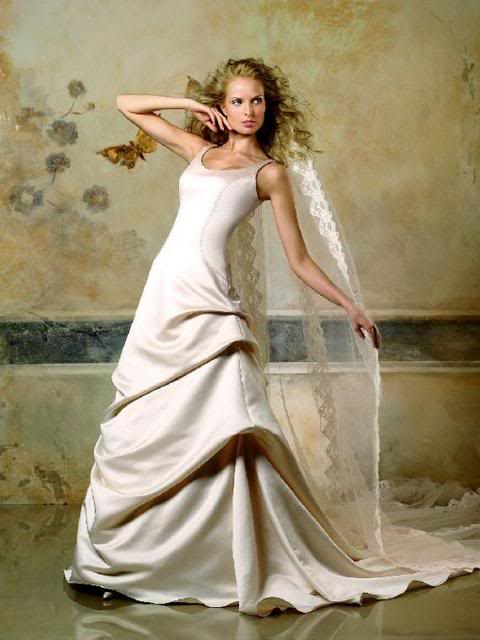 (I WISH this were THE dress) 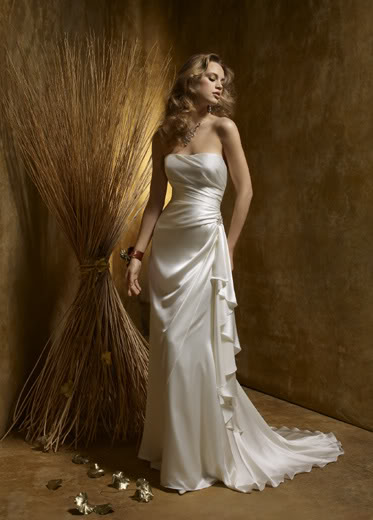 Finally, I decided just to get the one that made my waist look the smallest. Ta-da! (Please excuse Missy Poutypants – she probably hasn’t eaten in days!) 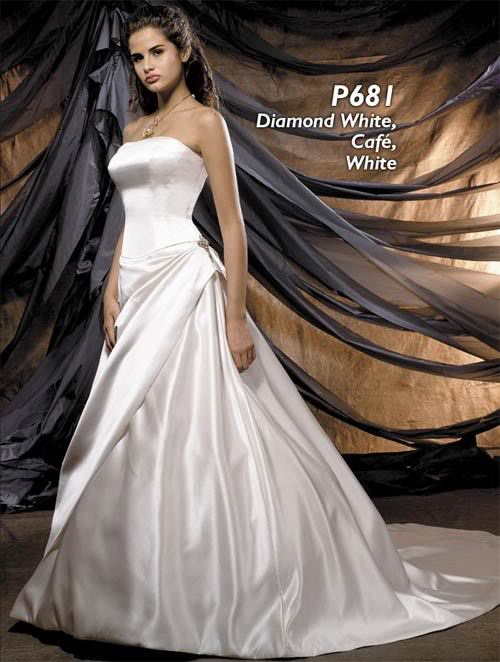 It is, of course, very princessy and pouffy, but it wins the smallest-looking waist award hands down. I found it at Mon Ami, the biggest and one of the most expensive bridal shops in Southern California. I tried on a sample that they’d marked down from $1,350 to $700, and it fit like a glove. However, it was the wrong color for me (café), and it had a ballpoint pen mark on the front, snags in the bodice, makeup stains inside, a broken zipper pull and a missing brooch at the hip. The shop would not budge on the price, but they said they’d put a ribbon on the zipper pull and assured me they could get the stains out. Oh, and they would gladly sell me a new brooch for the hip.

by Denise & Alan Fields, and I felt like I was being taken for a ride. So I started looking for the dress online. The salon wouldn’t let me take a picture, but I did know it was an Allure gown. As it turns out, it was one of those “no label” gowns that manufacturers don’t advertise so that you can’t find out how much they’re worth. They sell them to bridal salons for $300–$500 and then the salons mark them way up – in this case, to $1,350! I was lucky enough to find a picture on a British dress shop’s website, and then I found an eBay seller who was selling the dress through her shop in the Midwest. She sold me the dress brand new, in Diamond White, for $500, including shipping!

It was supposed to come in the first week of December, but she called me just a few weeks later and said it had arrived! Here are some gratuitous pictures of the dress in her shop.

What is Patrick wearing, you ask?

He’s wearing this snoozeriffic budget number from Jim’s Formalwear (the sneer costs extra!). Actually, he looks really good in it, but it’s probably the one area of the wedding I don’t have strong opinions about, so we went with his request to look like James Bond.

I was kinda stressing out that we’re going to be wearing formal clothes at a 9am wedding – definitely an Emily Post no-no. But I want the dress I want, not something that ettiquette says I should wear. And Patrick wants to look like James Bond!