Day 1: Always the Most Boring Installment

It seems like Day 1 is always the most boring day of the trip, at least in my trip reports. How about a little backstory to pad it out?

Originally we’d planned to spend a week at Walt Disney World to celebrate our anniversary. On our honeymoon we stayed in four places – Beach Club Villas, the Contemporary, Animal Kingdom Villas, and the Grand Floridian – which was really fun cuz I love trying new hotels. But the Beach Club was definitely our favorite, so this time we planned to stay there the whole time. We were able to rent points at BCV again from the same DIS Boards member and were all set.

Then, in September, we went on our week-long trip to experience the Disney Dining Plan for free and ride Haunted Mansion at Disney World and Disneyland on the same day. (Did we succeed? Click here to find out!) On that trip, I found that it took at least two days for me to unwind and begin to enjoy the vacation. The thought of wasting a quarter of our anniversary trip doing this scared me, so we decided to add three days. And because our free Annual Passes expired the day after our anniversary, the extra days had to be at the beginning of the trip.

It was too late to get into any of the DVC resorts besides Saratoga Springs (zzzzzzzzzzzzzz!) so we weren’t able to rent points. I wanted to stay someplace we hadn’t been before and thought it would be fun to try out BoardWalk Inn. But prices just weren’t coming down, so we booked Wilderness Lodge. I love the public spaces there, and the boat to the Magic Kingdom, but I wasn’t crazy about what I’d seen of the room décor. Then Disney released a screaming AP rate for WL and, well, who cares about room décor anyway?

Maybe because there were only four months between our September and January trips, or maybe because of the excitement of the holidays, or maybe because I was spending every spare moment writing my Disney weddings book, but for some reason, I kinda forgot about our trip until, like, 2 weeks before we left. I feel cheated out of all that fun anticipation!

OK, are you still with me? Don’t worry – there will be pictures soon!

We left on a Wednesday. Everything went really smoothly, which is great when you’re traveling but heck-of boring to read about. Our downstairs neighbor graciously got up early to drive us to the airport, one hand on the wheel and one wrapped around a mug of tea, laughing at all our dumb jokes. When we got to the gate, we did our usual routine of buying food for the flight at the closest cafe. Except as we were in line to board, the couple behind us spotted our take-out bag and said, “We ate there last time we flew out of this terminal and had to go to the hospital with food poisoning!” Aiyeeeee! So long, lunch!

The flight from LAX to MCO was four-and-a-half or five hours but felt short for some reason. We think it’s cuz they didn’t show a movie, so you didn’t have anything to mark time by. 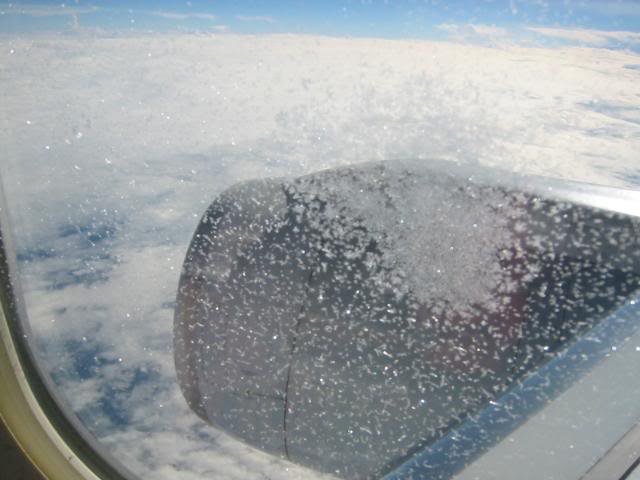 Looky! Ice on the window! 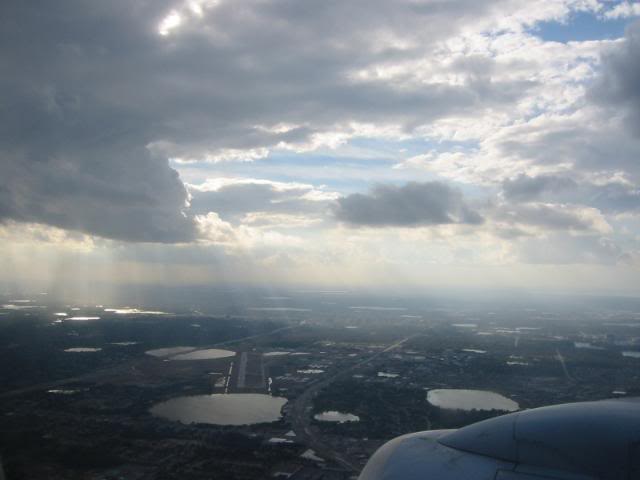 By the time we’d each finished an entire magazine, we were there!

First (Orlando) Ride of the Trip

However, our experience on the other end made up for the quick-feeling flight – we waited an HOUR for luggage to show up at the carousel. While we waited, I picked up my phone messages and discovered something really weird. You may recall that on the last day of our last Walt Disney World trip, we had a horrible experience with the L.A. shuttle company that was supposed to pick us up. Well here it was the first day of our next Walt Disney World trip and, out of the blue, the owner called to apologize! Very spooky….

Anyway, to keep me from imploding with impatience, Patrick handled the bag pickup while I went to get our Alamo rental car. I thought I’d outsmarted the stoopid check-in kiosk (which always seems to need some documentation belonging to Patrick when he isn’t with me) by putting both our names on the reservation. Nope! It still wanted his license, probably just to spite me.

That accomplished, I booked it out to the free-for-all garage to see what was left in the way of El Cheapo cars at 5:30pm on a Saturday. And what was left was the Festival of Kia Rios! There was one non-Kia there, but when I got in it, it smelled like sweaty men, so I resigned myself to a Kia – at least I found a Rio in one of our wedding colors! 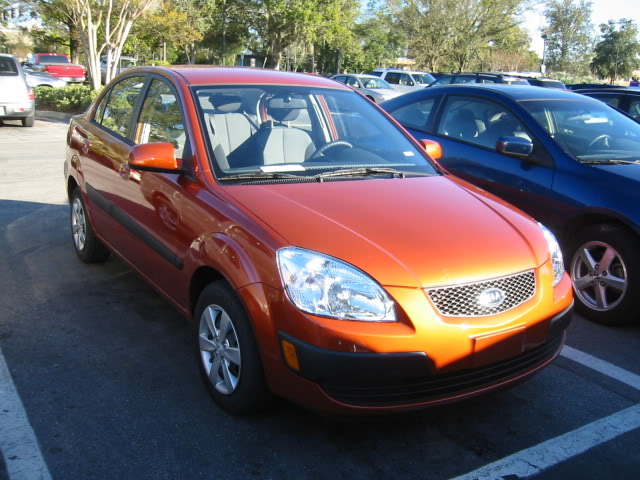 But it wasn’t until we started to drive away that we realized [Ghost Host Voice] this Kia had NO (power) WINDOWS AND NO (power) DOOR LOCKS!!! That’s right, there we were in Florida, Land of a Thousand Toll Booths, with hand-crank windows. Some of you probably don’t even remember the days of roll-down car windows….

And don’t get me started on what a drag it was to have to flip the locks by hand (and circle the car locking them all again when we parked) or to use the ignition key every time we needed to get in the trunk. Honestly, I’ll bet we wasted at LEAST half an hour of our lives doing all those things…. And that’s a half an hour we could have been wasting in Ellen’s Universe of Energy!

Other than that, Clementine, as we half-heartedly called her, was OK. She handled like a golf cart and looked like there should be a huge wind-up key sticking out of the back, but at least we didn’t have to ride Disney buses!

As we whizzed down I-4 toward Mecca, the clouds parted and a heavenly light illuminated our path… 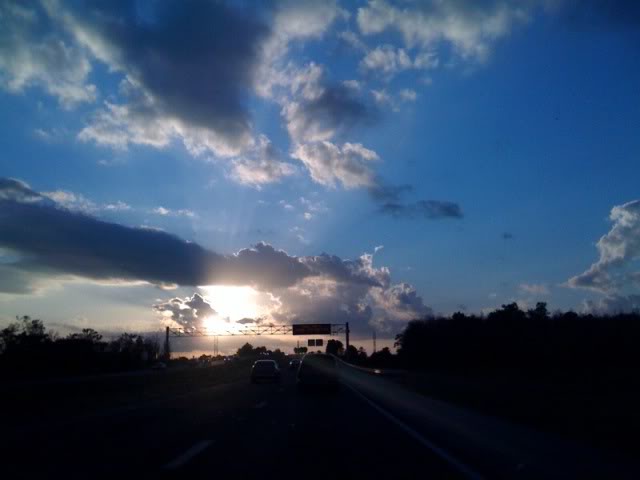 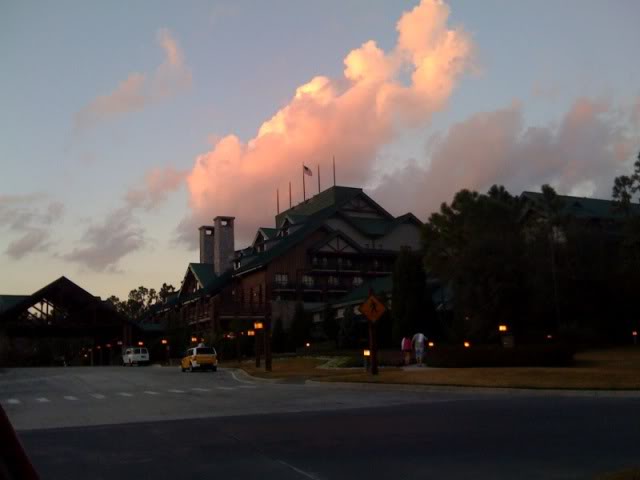 Home for the next three days!

I got a little grumpy when we checked in cuz our King bed request didn’t come through (apparently they only have, like, three or something.) However, they did honor our request for a high-floor North Wing room facing the Magic Kingdom! I think it’s sort of the “secret porthole stateroom” of Wilderness Lodge.

You can (kinda) see the castle… 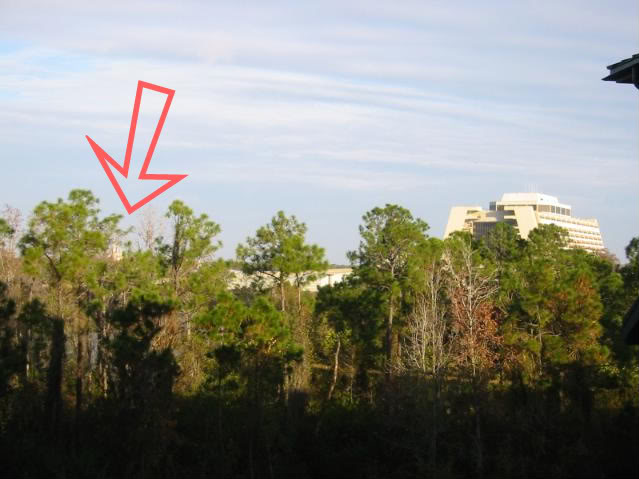 …But you can also see the service entrance and the Dumpsters! 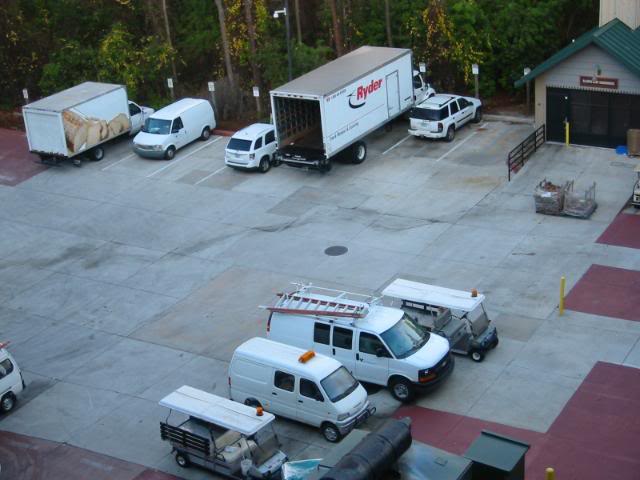 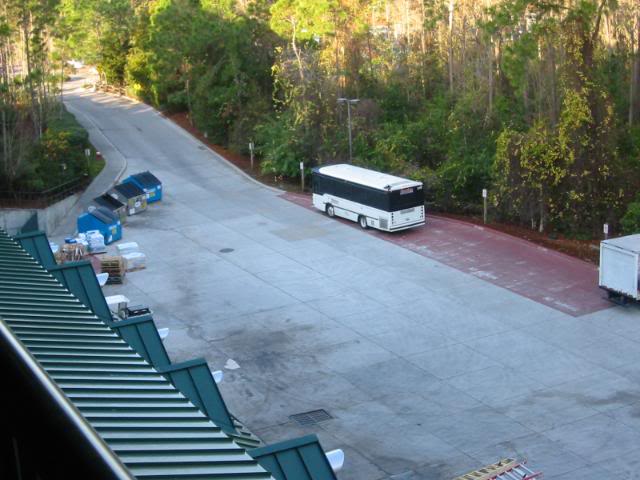 We called about switching rooms but were told the only availability “in your category” was over the bus pickup area. In other words, “No free anniversary room upgrade for YOU!”

Oh well! Here’s what we got: 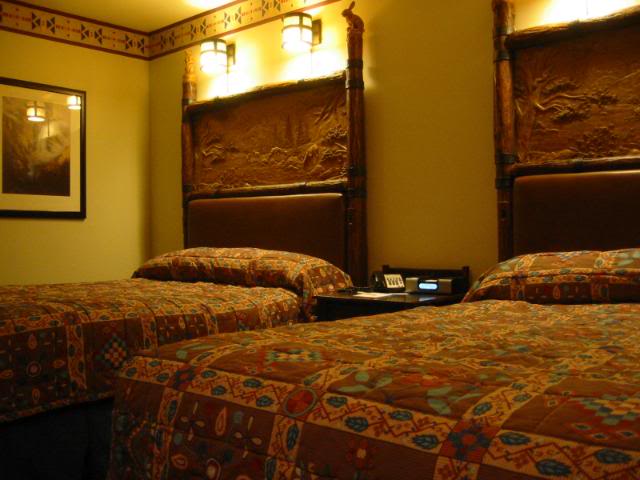 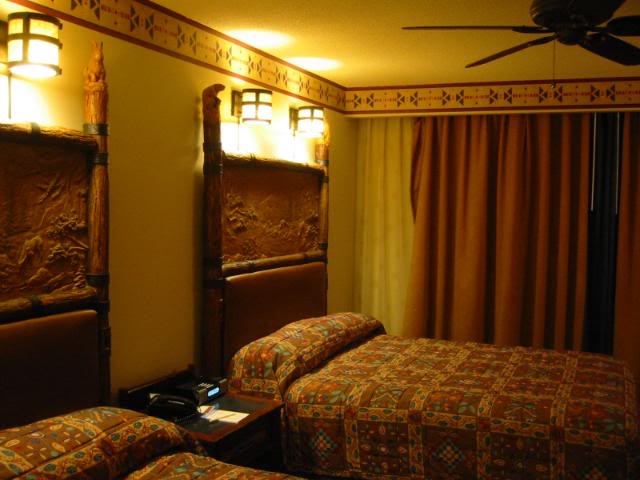 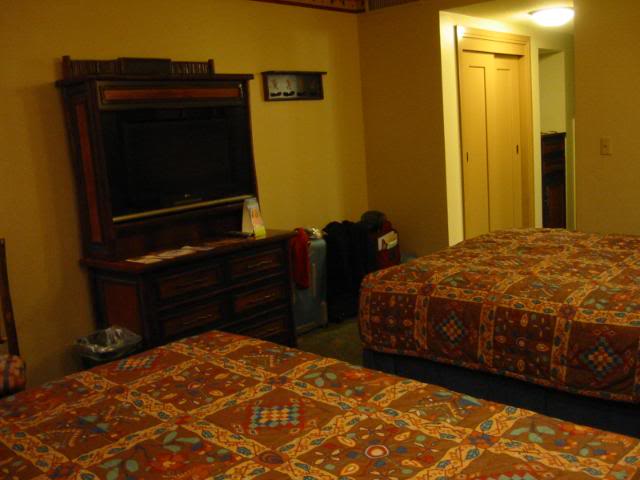 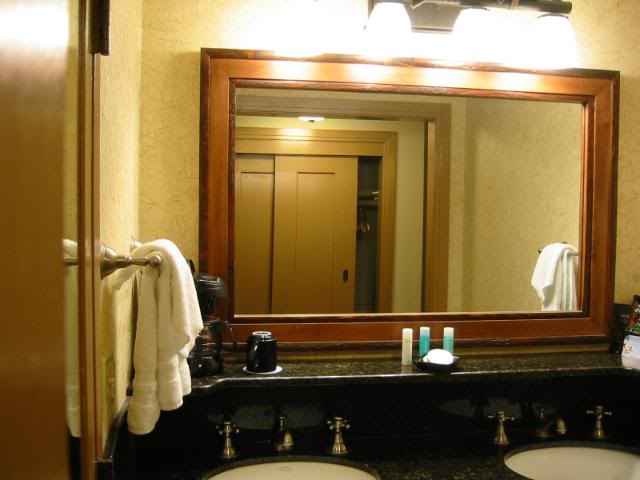 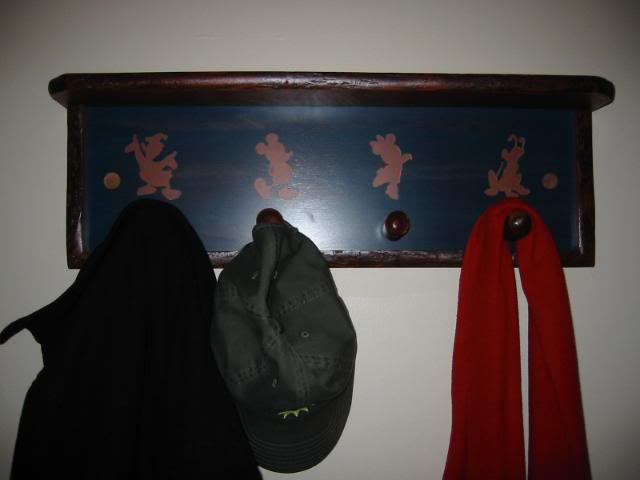 This rack is the simplest thing but made a pretty big difference in keeping our room tidy – I don’t know why they don’t have these in all the resorts! 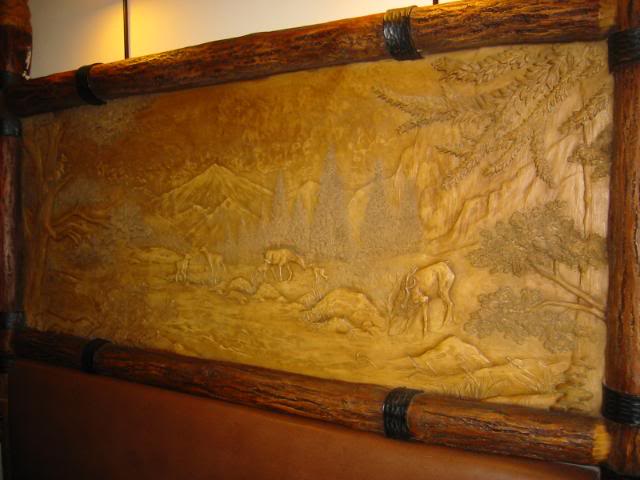 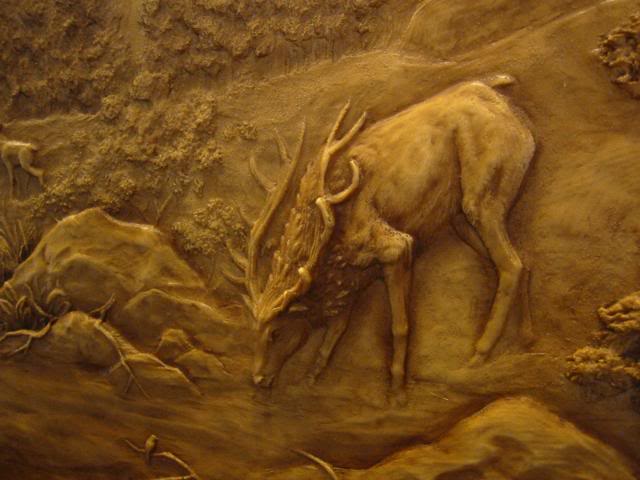 When we checked in, they had our box of bottled water from CostCo and the box of stuff we’d shipped to ourselves (we didn’t do this soon enough and ended up spending nearly $35 to FedEx ourselves about $11 worth of cereal and Tupperware – d’oh!).

Once we got it all in the room, we freshened up, put on our new Anniversary pins and went down to Artist Point for dinner. 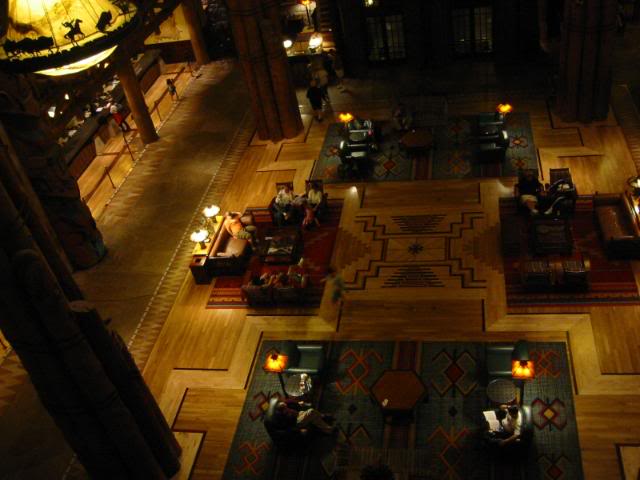 View of the lobby from the 6th floor

This pic is kinda dark, but I loved the detail on the railing in the elevator

We had a wonderful experience at Artist Point. When they saw on our reservation that we were celebrating our anniversary, they treated us like royalty. Everyone kept wishing us a happy anniversary, the manager came by our table, and they gave us personalized menus without us even asking ahead of time! 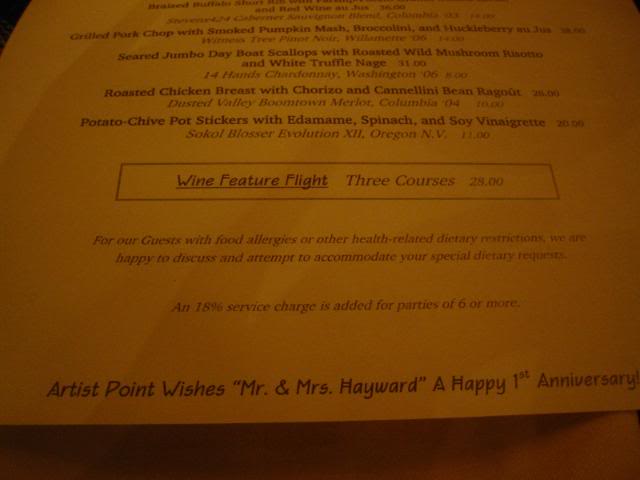 A-ha! They appear to be in on my nefarious plot to make Patrick change his last name to mine!

We started by splitting the Smoky Portobello Soup with Roasted Shiitakes and Chive Oil…. 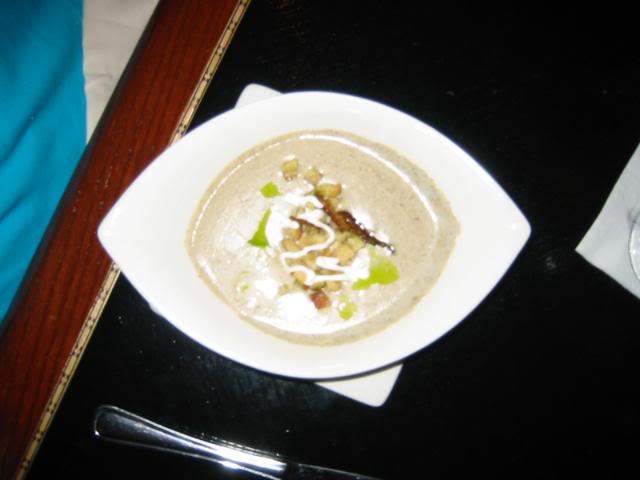 … followed by the Braised Buffalo Short Rib with parsnip potato grain, caramelized leeks, and red wine jus, which was sooooo flavorful and practically melted in our mouths. 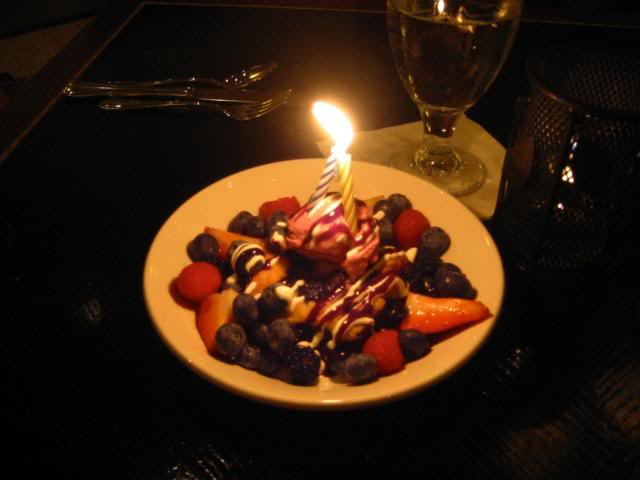 Being an anti-fruititarian, I had to go by Roaring Forks later and get my own dessert, a kind of Magic Bar (a.k.a. Hello Dolly, a.k.a. Seven-layer Bar).

We also poked around in the gift shop a bit before we went back to our room. It was a really nice evening just getting to be together. In the weeks leading up to the trip we’d been working long hours at our jobs and hardly seemed to see each other. This was our first chance in a long time to spend time together, and even Patrick mentioned how nice it was. And then he gave me a red envelope labeled “Note #1” that had a retro-looking romance coupon in it entitling me to some “TLC”… I wondered if there were more such coupons to come…

Up Next: Who Even Goes to Animal Kingdom on Their First Day?