Today was a very sad day. I’m sure that all of you, wherever you were, felt a brief wave of sadness pass over you, signaling that someone, somewhere was leaving Walt Disney World. And that person was me!

Instead of crying, I expressed my sadness by being cranky. And my dear husband spent the morning bending over backward to calm me down, cheer me up, and smooth things over.

We got up and finished packing. I had to figure out what to do with the leftover cake and rapidly disintegrating topper (we’d sent broken-winged white chocolate Tinkerbell home with Nathan & Jensey on Thursday night – let’s hope they made a good fondue out of her!). I’d brought a bunch of plastic food-storage containers, but I could only fit one in our suitcase, so I decided to whack the remaining cake in half and give one part to Betsy when I met her in a few hours. I think I also gave her our topper, which I wrapped in a giant Ziploc bag, but she’ll have to confirm that. I dunno what I thought she was gonna do with a hookah-shaped chunk of fondant…

When we were in the elevator to the lobby, a woman in it with us did a double take and then asked if we’d been married in Morocco. Turns out she’s DISer quentina (Kim) and recognized us from our wedding trippie! (And here I thought we were going incognito under our subtle anniversary hats…)

The cranky part started when we dragged everything down to the Beach Club airline check-in desk. I can’t remember what the trouble was, and I can’t read what I wrote in my journal late, late that night (it looks like “punt barlwy pus”) – OH! They couldn’t print my boarding pass! They printed Patrick’s and then were like, “So, you have to get yours at the gate.” As if that were just standard procedure to split up a party that way. Finally, under cross-examination, they revealed that there was something wrong with their printer and suggested I go have the Concierge access my account online and print it.

At the same time, they weighed Big Bertha the suitcase and told us she was .9 lbs (that’s POINT nine pounds….) over the limit. I flipped out and barked at Patrick to redistribute the weight while I went to the Concierge desk, but I had no idea how he’d accomplish that because everything was meticulously packed in exactly the place it would fit. I stalked inside to the Concierge desk, only to find a line eight people deep – argh! So I stalked back out to the airline check-in and found Patrick whistling merrily and telling me that the staff had relented and accepted Big Bertha for who she was: .9 pounds overweight. Hooray!

Patrick and I met in the lobby, where he’d put our name in at Captain’s Grille for breakfast. I was grumpy that we had to wait because I’d just assumed we could waltz in for brunch on a Saturday morning without a reservation. 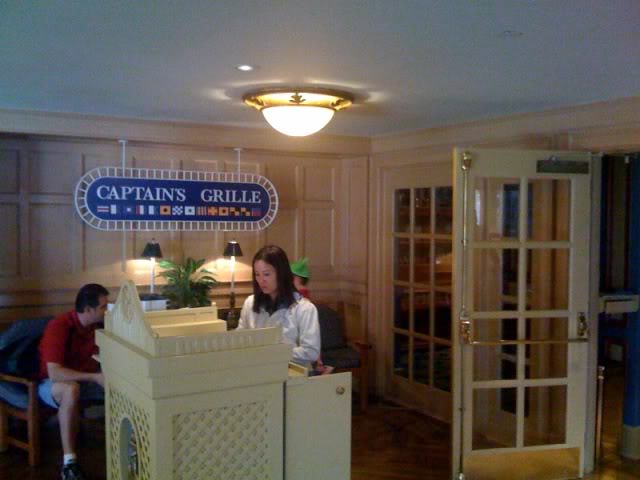 I’d picked it because it was convenient and we’d never eaten there before. It was not the ideal dining experience cuz we were pressed for time. When we got in about 15 minutes later, it was packed. And dark! And service was frantic. 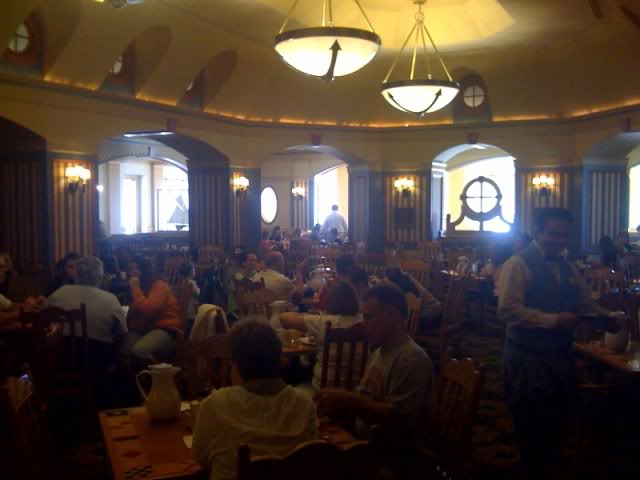 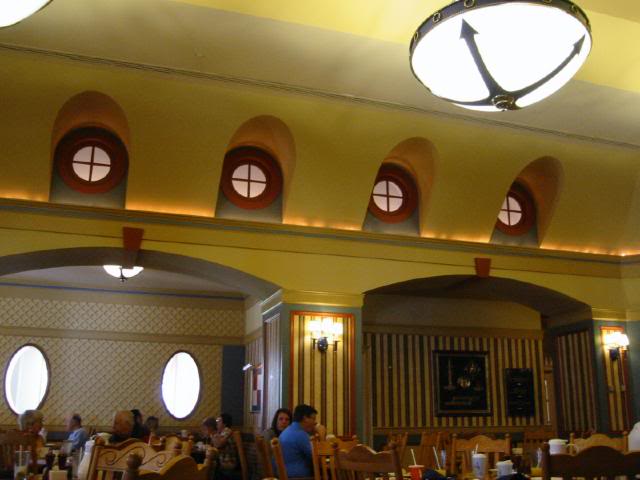 We prolly shoulda bitten the bullet and done the brunch buffet just to save time, but I couldn’t bring myself to pay that much for breakfast.

Instead we ordered off the menu and then I bugged our server at regular intervals to see when our food would be ready. 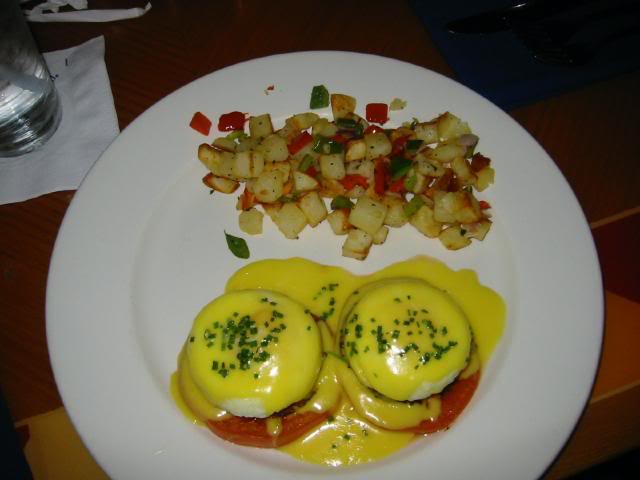 This was just OK. I guess it’s hard to make a good hollandaise…. 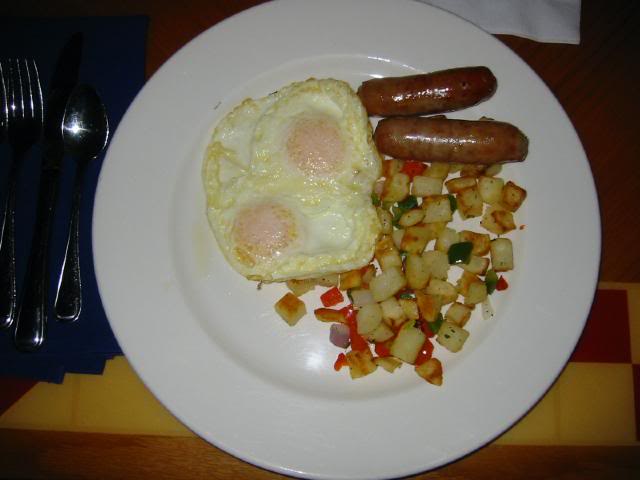 Eggs Your Way - two eggs, breakfast potatoes, choice of bacon or sausage, and a biscuit

I’m sure Patrick thought this was fine. He likes everything!

Unbeknownst to us, when we got up to leave, we were spotted by DISer GoodFairies (Amber), whose BF apparently encouraged her to come talk to us, but she didn’t want to be “stalkerish”! Little did she know how much we love meeting DISers!  (I did get to meet her through private message about a week later.)

By then, Betsy had arrived at BoardWalk Inn and was just checking out her room, so we whizzed over there in Clementine to meet her!

Patrick dropped me off at the lobby and drove out to the boonies to park. Betsey and her sister and about five dozen children (OK, maybe there were less) were gathered around the plush seat-thingie that’s just inside the doors at BoardWalk Inn. 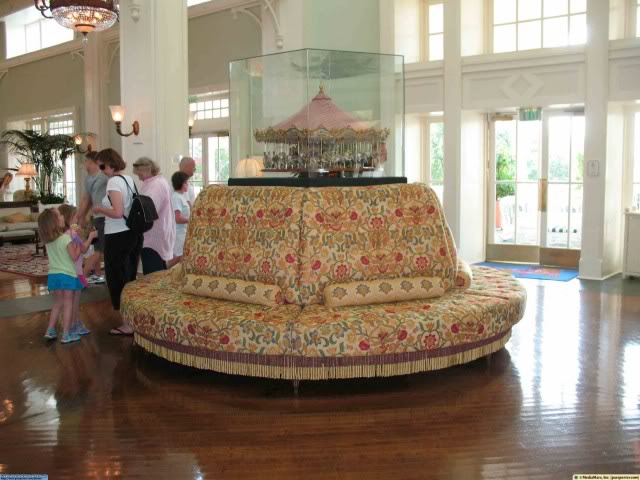 A-ha! Found a picture of it online – apparently it’s called the “carousel pouf”

I’m sure I completely overwhelmed them with my breathless combination greeting/explanation of the cake.

Lurkyloo: “Um… can I take a picture of you for my blog?”

Betsy & Co.: [whispering to each other] “Maybe if we take a picture with her she’ll hand over the cake and leave us alone!” 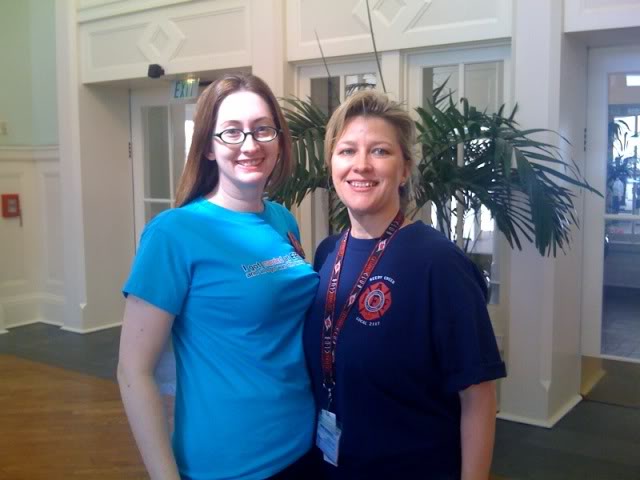 It was great to finally meet Betsy in person, and I was terribly jealous that she was just starting her trip while ours was ending. Patrick finally got to the lobby just as the five dozen children broke into a chorus of “Moooooooooooooom! Can we GO now?! They have, like, RIDES here, you know!” So we wished them a happy vacation, sadly waved farewell to the other half of our cake, and hopped into Clementine to head to the airport.

Driving to the airport is a boring story. The most exciting part was stopping for gas.

Here are some pictures of the plane trip: 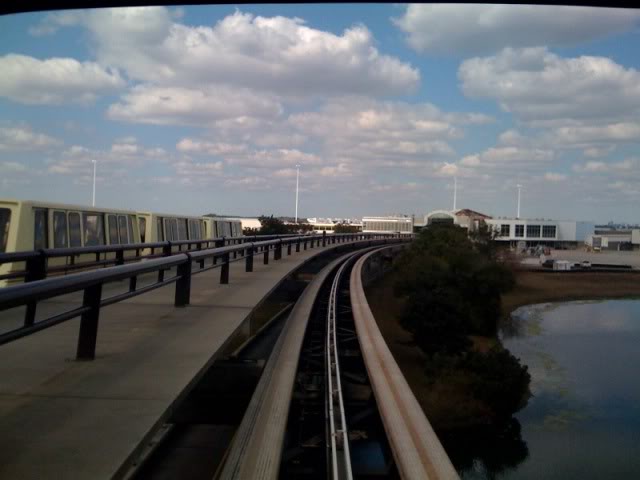 Last Ride of the Day 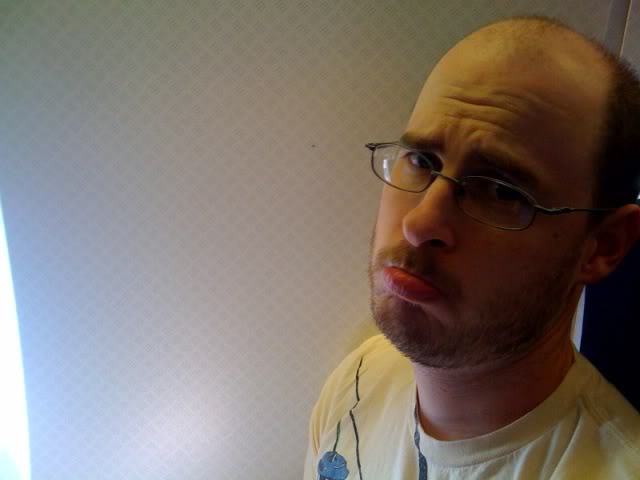 Some window seat that turned out to be! 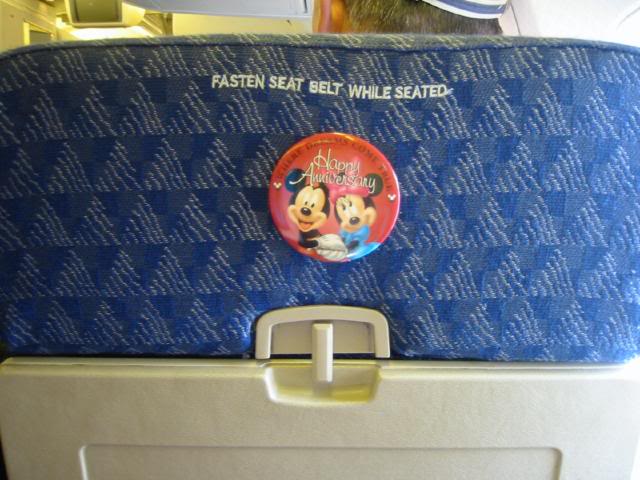 We found some small amusement in the egregiously bad Photoshop work on the safety cards – it was almost as fake as the work on DVC’s new print ad campaign! 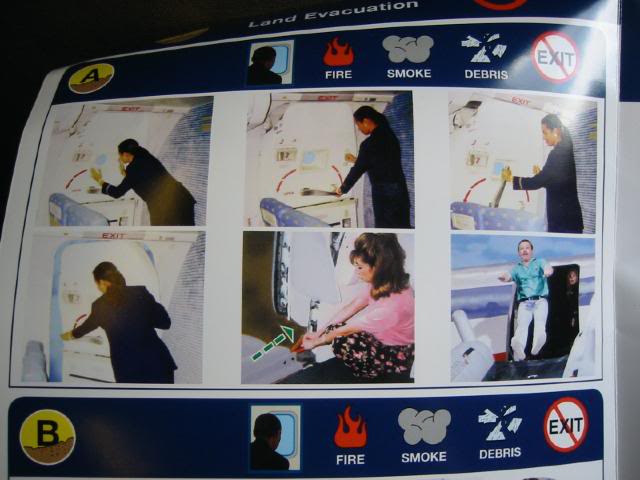 Check out Baryshnikov leaping onto the slide! 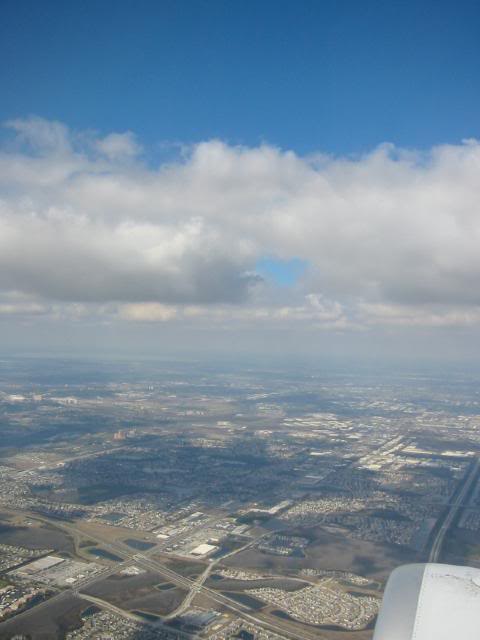 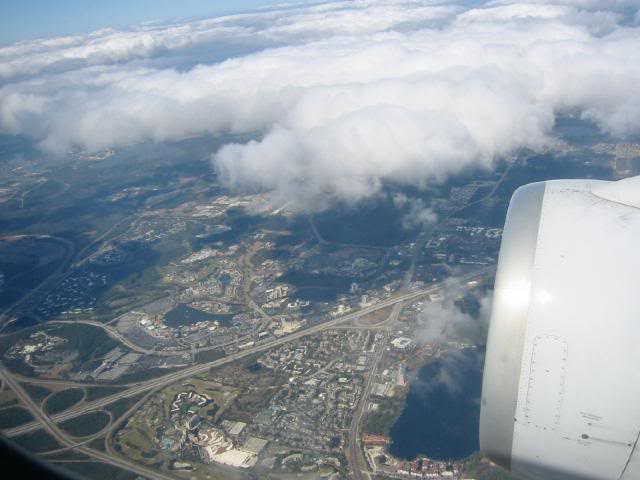 I think you can see Downtown Disney in this one... 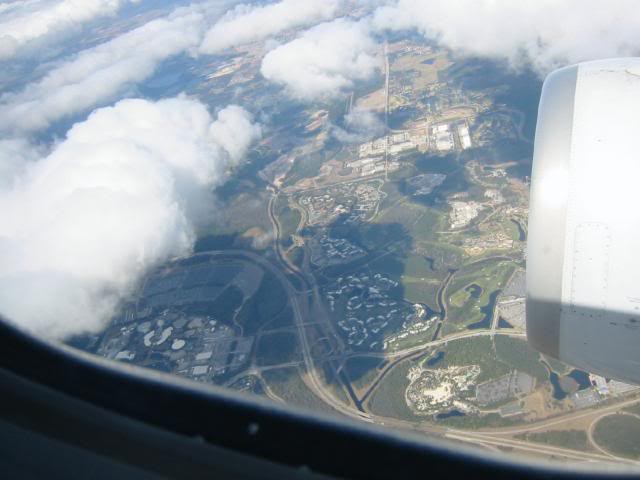 And this one may have a corner of Epcot. Or possibly Oklahoma. 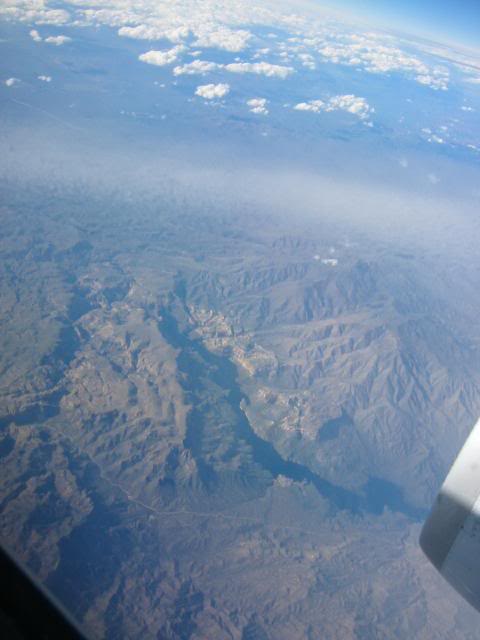 Is that the Grand Canyon? 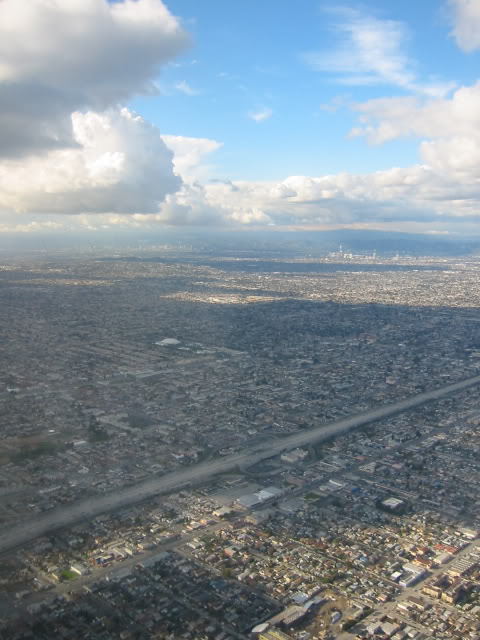 Our neighbors picked us up at LAX in a Florida-like downpour – I’ve never seen anything like it in L.A.!

We came home to this: 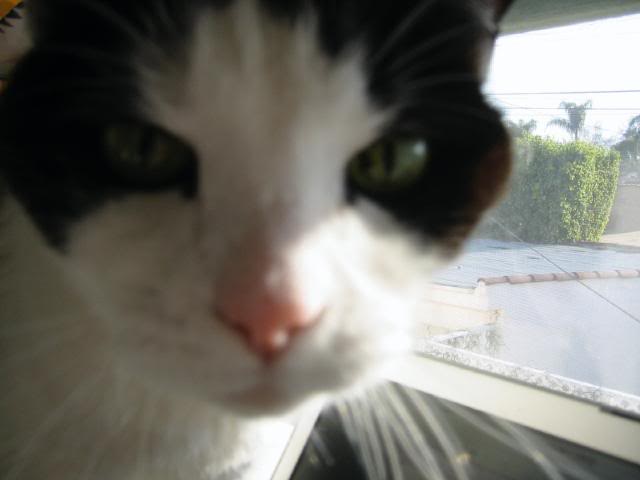 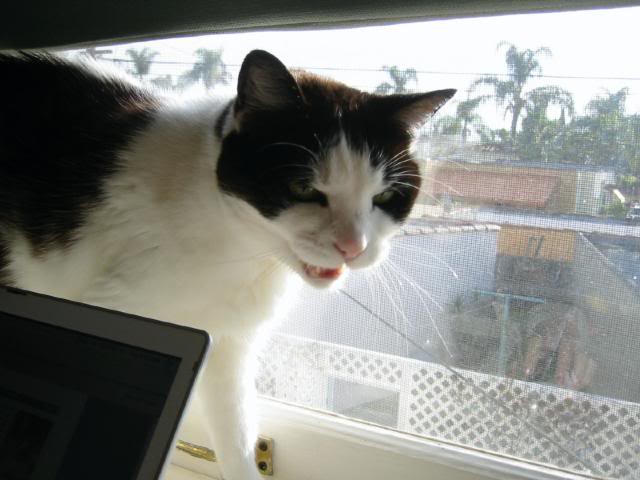 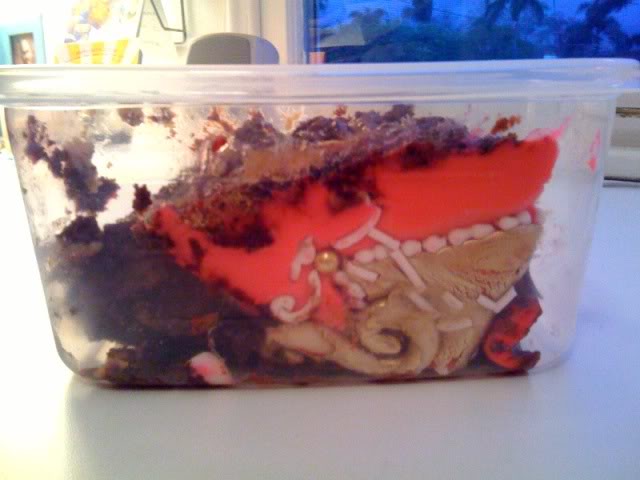 Lurkyloo will return in… Wedding Crasher: 4 Parties in 3 Nights with 2 Cameras and 1 Fabulous Hat!