Day 14: The Worst Day of the Honeymoon

… “worst” being relative when you’re at Walt Disney World!

Oh dear. This day doesn’t have very many pictures in it. I had to go on Flickr.com to find some to round out my report. My apologies to the generous vacationers who shared their photos with me…

We decided to start the day back at Market Street Café in Celebration cuz their breakfast is so good. Patrick had been angling for a day at a water park during the whole trip, but we kept finding other ways to fill up our days off, and it was getting to the end of our trip. As we walked to the parking lot at AKV, the skies were cloudy and it was much cooler than it had been all week. Patrick looked at me hopefully and started a running joke about it being prime water park weather. I just exhaled so he could see my breath.

This time we had to wait in line at Market Street Café, prolly because the President’s Day crowds were beginning to roll into town. Between the two of us we had pancakes, eggs, home fries, bacon, and biscuits and gravy (but no pie – I was saving room for Kilwin’s ice cream!). After lunch we wandered into an overpriced used bookstore down the street and spent half an hour reading books about the history of Epcot (Patrick) and Celebration (me). Then we went next door to Kilwin’s to stock up on fudge for the flight and to try their peanut butter chocolate ice cream (verdict: meh….).

I wanted to be a good wife and compromise and blah blah blah, so I finally told Patrick I thought we could go to Typhoon Lagoon today. You should have seen the look on his face – actually, you probably have… it looked something like this: 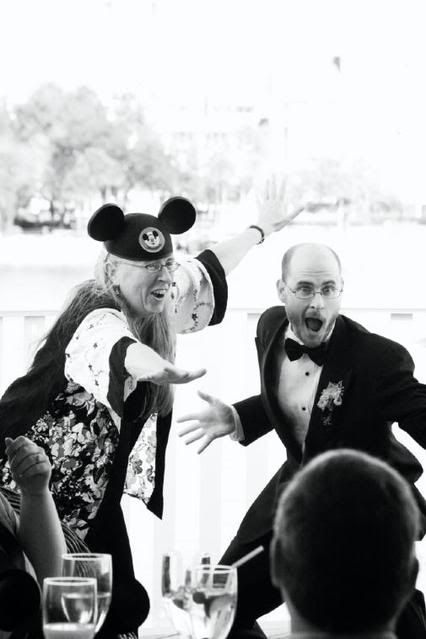 So we ran back to AKV to get our swimsuits, and it’s a good thing we did because we FINALLY saw animals on the savannah outside our room! I guess the middle of the day is prime time. We saw 3 giraffes, 2 zebras, some gazelle/deer thingies and a bunch of birds (none of which are pictured here). Wow! 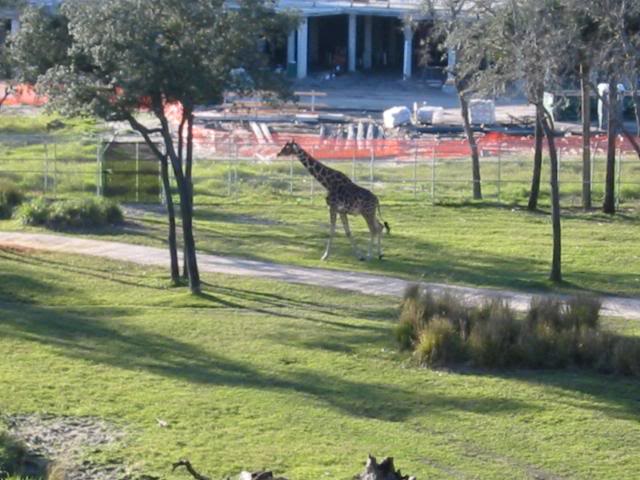 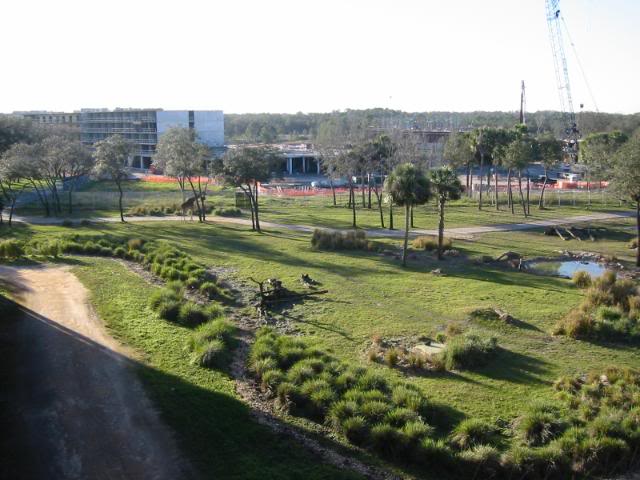 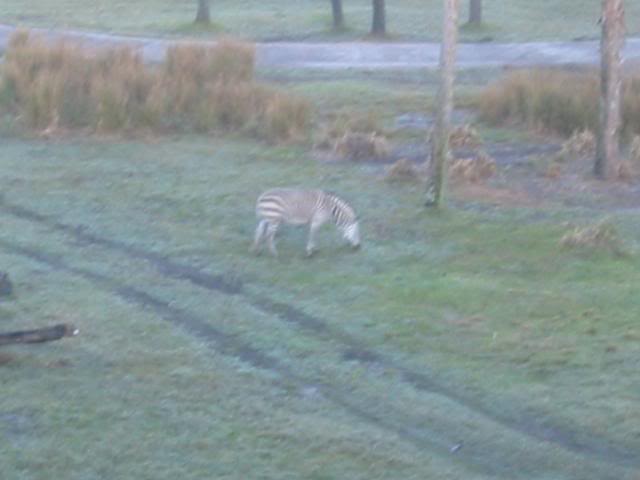 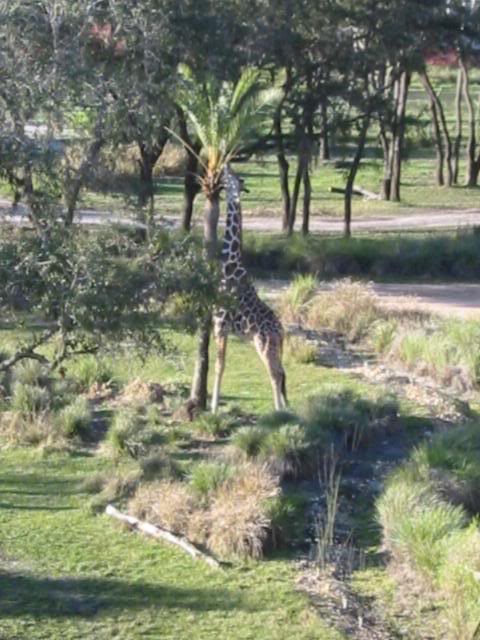 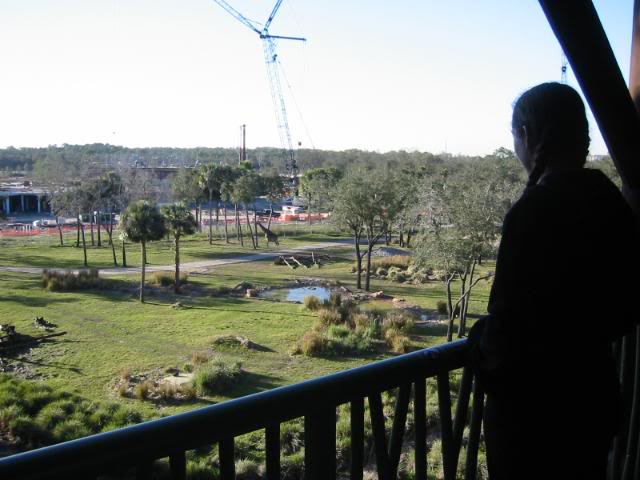 Finally we suited up and headed out into 60-degree weather for our big fun day at Typhoon Lagoon. 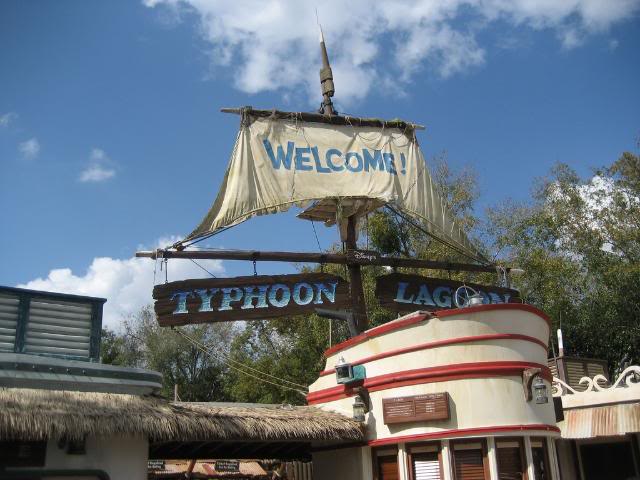 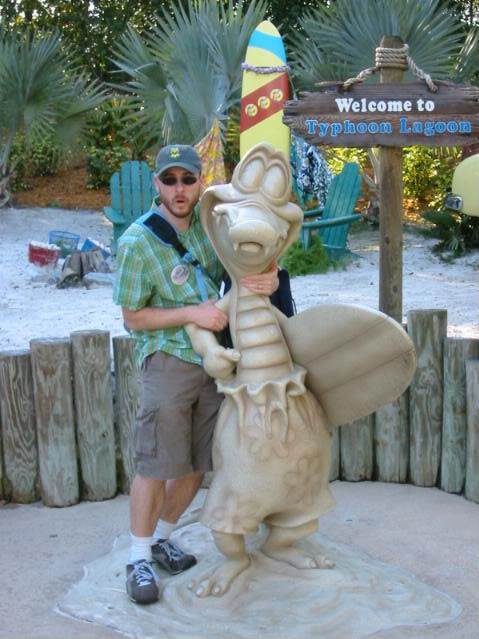 We were so excited – there was hardly anyone there (because everyone else had paid attention to their thermometers that morning) and we walked right up to the ticket counter. We told the guy who took our ticket (possibly the same guy who sold us our ticket – it was that slow) that we’d never been before and asked him which slide we should ride first. His recommendation: Crush ‘n’ Gusher. Not having a clue what this was, we skipped merrily along our way, ready for our big adventure. 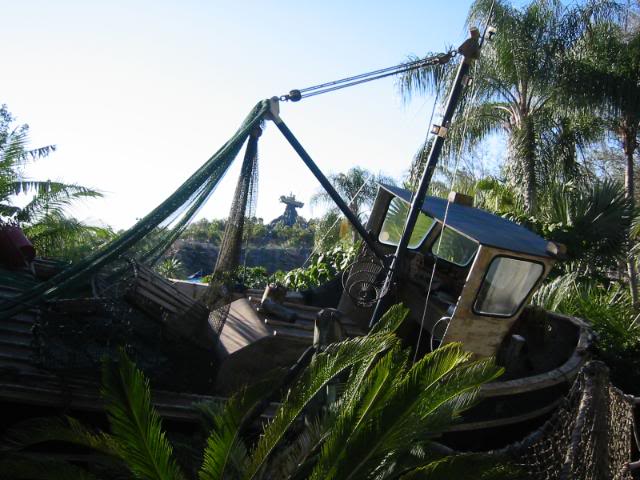 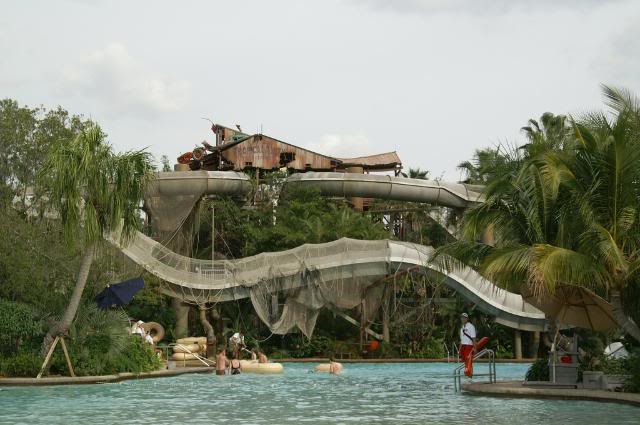 OK, now, I had never been to any water park before, but I figured that riding water slides was probably just like riding roller coasters, except wet and with fewer clothes. What I’d sorta forgotten is that I don’t even like to put my head underwater in a swimming pool, and for much of my life I avoided going in one at all. Hmmm….

We went scampering up Crush ‘n’ Gusher’s empty stairways to the tandem slide, plopped into a tube, and shot down the pipe. 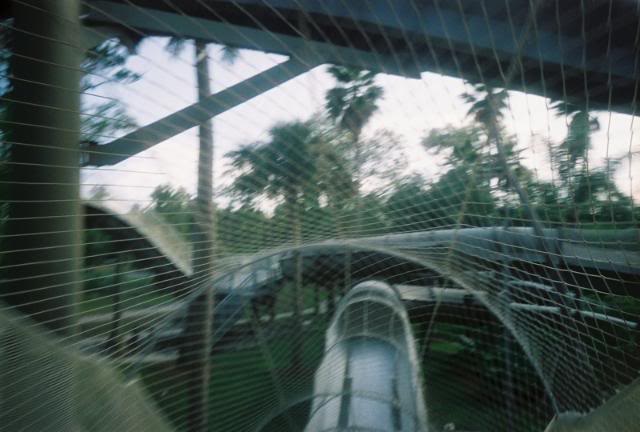 Three seconds in, ice-cold water shoots up my nose, my self-preservation instinct kicks in, and I wail “I don’t want to do this anymoooooooooooooooore!” as we bounce and scrape our way down to the bottom. A PhotoPass photographer had the gall to take a picture of me in all my misery as we were dumped out.

This is what I wish I’d looked like coming out… 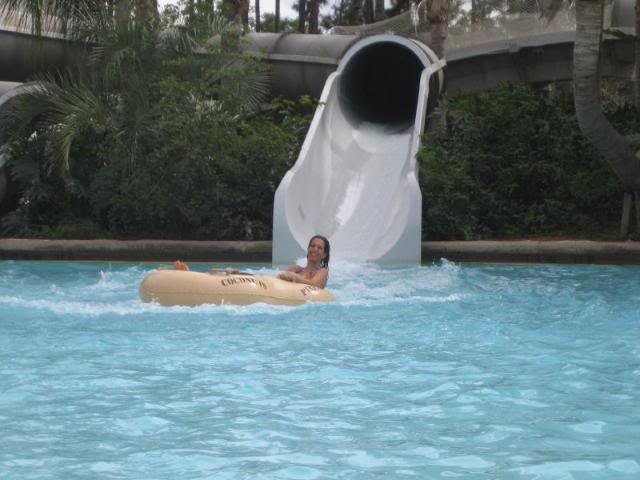 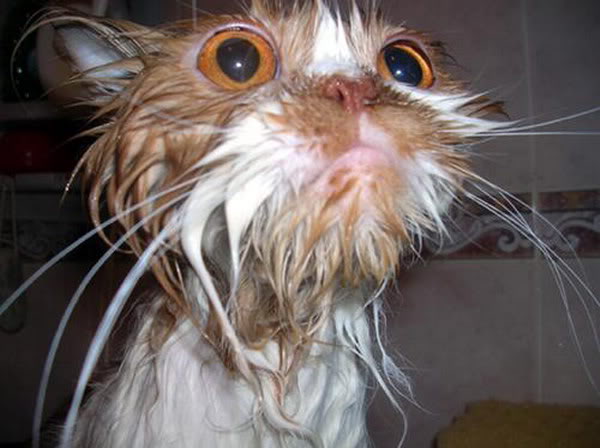 As we staggered to the shore, the PhotoPass photog belatedly informed us that Crush ‘n’ Gusher is the only slide in the park that doesn’t have heated water. Patrick shepherded me to where we’d left our towels and promised that we’d go find some warm water. Off to the giant wave pool! 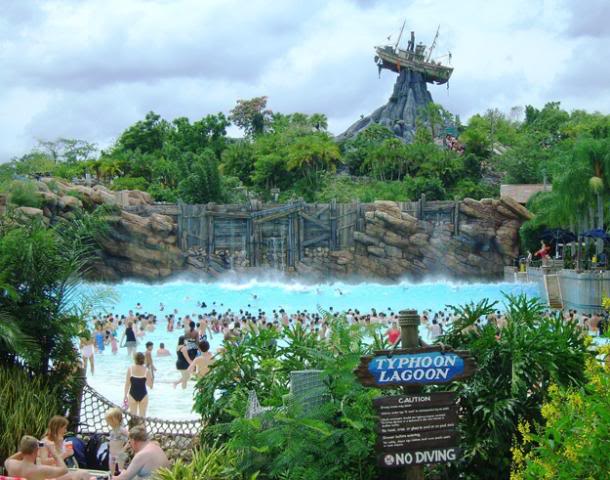 Patrick waded out about halfway to wait for the next big wave, while I tried to find non-moving water deep enough to keep me warm.

I asked the lifeguard, “Where can I go to just sit in some warm water?”

She deadpanned, “The hotel pool.” 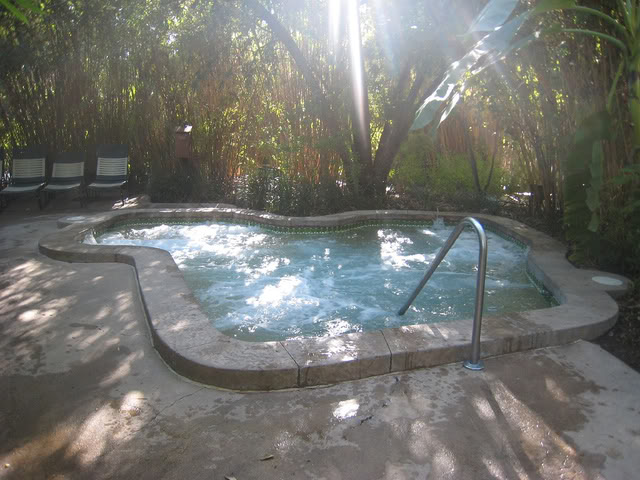 My favorite place at Typhoon Lagoon is... the hot tub at Animal Kingdom Lodge!

I ended up paddling around the kiddie area adjacent to the wave pool, where a little boy splashed repeatedly down the 3-foot slide and declared “I’m a big MAN!” every time he caught my eye. Patrick’s adventures in the wave pool gave me time to ponder things like, “Why is the floor of the kiddie pool rough enough to scrape your knuckles?” and “What do you mean, there’s no hot tub at Typhoon Lagoon?” 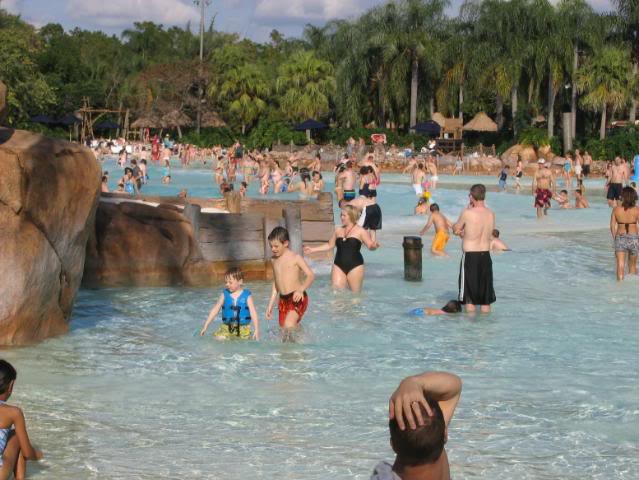 Next we tried the Lazy River. 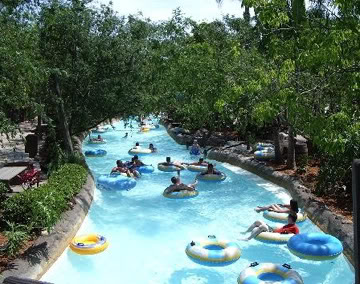 I did OK here with our inner tube, but it was so %$#@! cold that we spent the whole time trying to avoid the water jets. 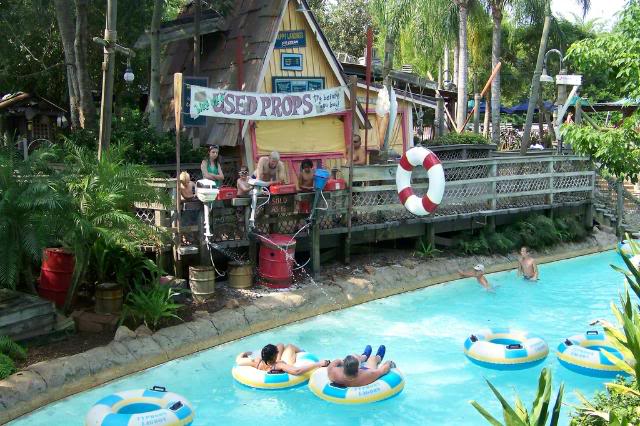 I thought I remembered a guidebook saying something about a surprise drop in the cave part of the Lazy River, so I bailed out right before we got there. 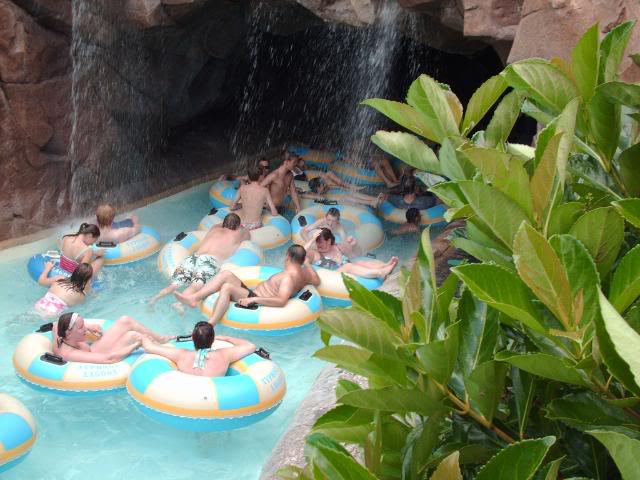 Boy, are these people about to be surprised!!!

I streaked along the path to the other side, teeth chattering, til I saw Patrick come out of the cave. He said, “There’s nothing – it’s just a cave!” 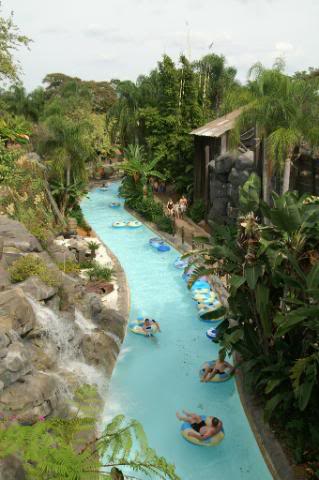 Only a few survived...

One thing we both wanted to try was the shark reef. I LOVE rays and I love looking at animals and fish, so this sounded cool. First we walked through the submerged ship in the reef, where you can see the fish swimming around. Only one side was open to the fish, and the glass was all scratched and smeared, so it was hard to see anything. But talk about great theming! 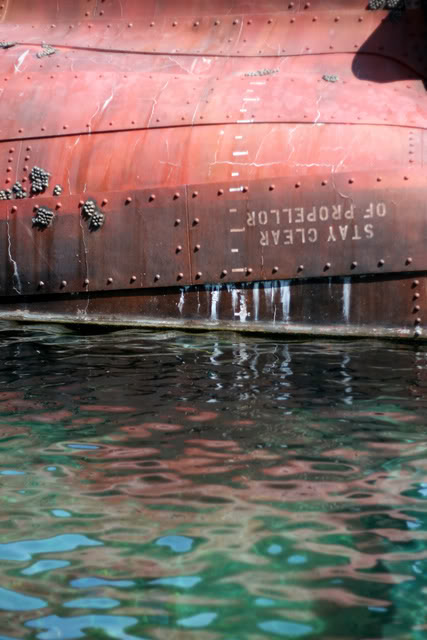 I could only find a picture of the outside of the ship...

So we got our life vests and snorkels and went through the little demonstration of how to snorkel. I had never done this before either, which might have something to do with what happened next. We sat on the ledge at the edge of the water and were told to swim straight over the reef, looking down at the fish as we went, and we weren’t allowed to turn around. 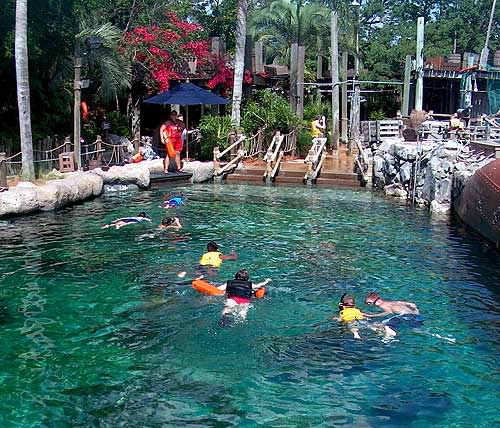 Well as soon as I put my face in the water, I started panicking. I may have been breathing through the snorkel correctly, but it felt very scary and suffocating. Patrick calmed me down, and the nice CM who did the demonstration told me all I had to do was swim from island to island. So I sucked it up and pushed off into the water, but even the prospect of seeing rays wasn’t enough to distract me. I think I put my face in the water once the whole time, and I could barely see anything. I was so intent on just making it to the other side alive that it didn’t sink in til the end that I hadn’t seen any dang fish. So I started to turn around to go meet Patrick, and of course the CM at the other end barked at me to keep going forward. When I got there, all I wanted to do was stay in the warm water and wait for him, but she barked at me again that I had to get out—which was terribly rude, considering I had just narrowly escaped almost certain death!!! 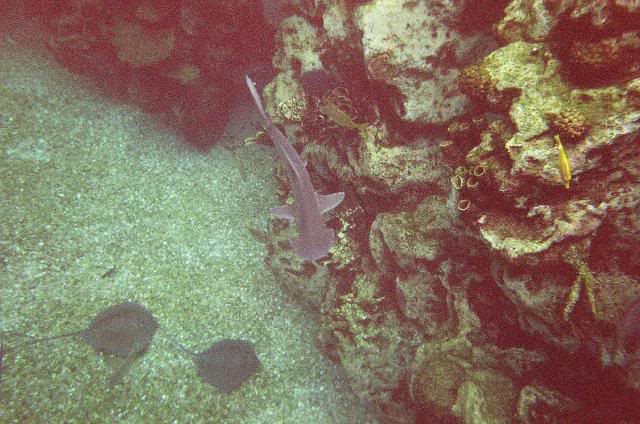 What the scaredy cats don’t see while they’re freaking out on the surface...

So that was pretty traumatic… Patrick said, “Gee, I guess it’s good we didn’t blow all that money on swimming with dolphins at Discovery Cove!” I decided to be Towel Boy for the rest of the day. I sent Patrick off to each crazy water slide, and then I waited for him at the bottom with a nice warm towel. He had fun, and he got some lovely PhotoPass photos with various strangers on the raft rides.

Finally, we got to my favorite part of the day… 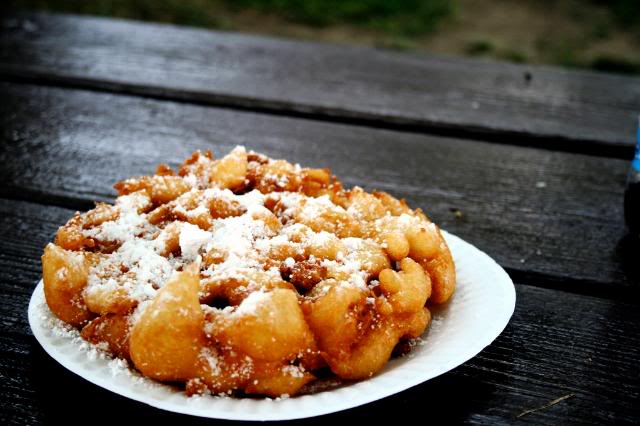 We hadn’t eaten since breakfast, so a funnel cake with ice cream and chocolate sauce tasted like manna from heaven.

Then it was time to go back to Animal Kingdom Lodge. Hooray! We sat on the balcony, took showers, and probably did more laundry. For Valentine’s Day dinner I’d made another reservation at Jiko – even 6 months before, I’d known we were going to love it enough to go twice! 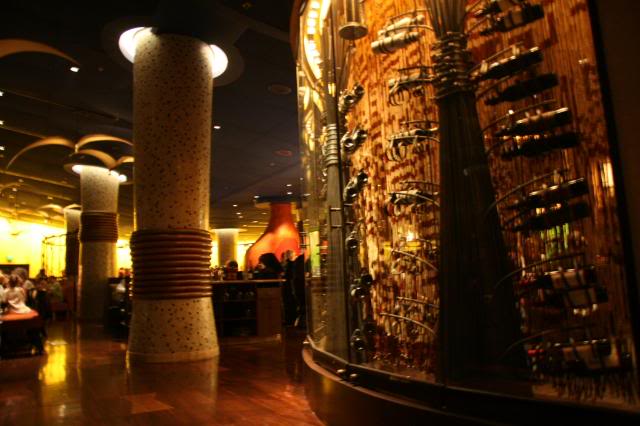 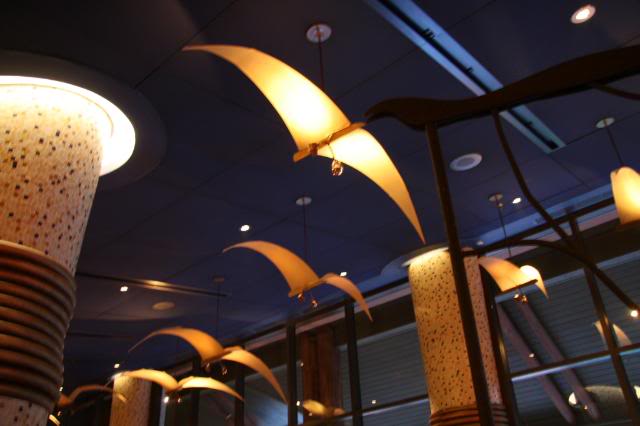 This time I had the sturgeon that I’d been eating from Patrick’s plate last time. 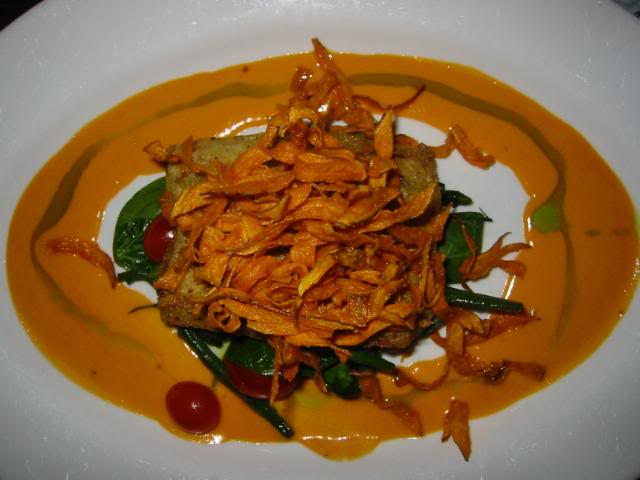 He had a curry. 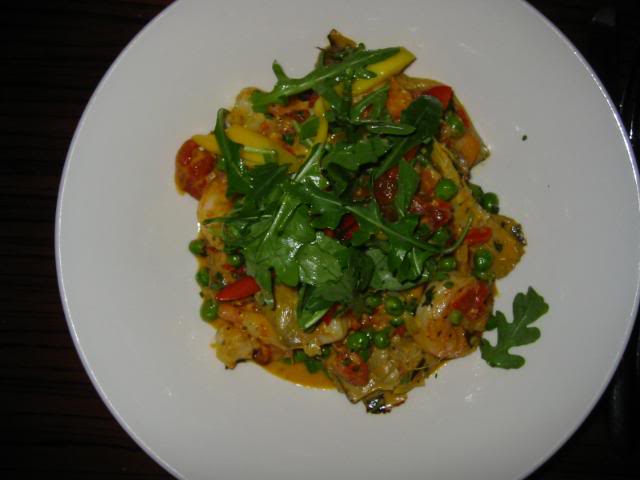 Does anyone know why the pretty little creek that flows up to Jiko’s windows is/was dry? 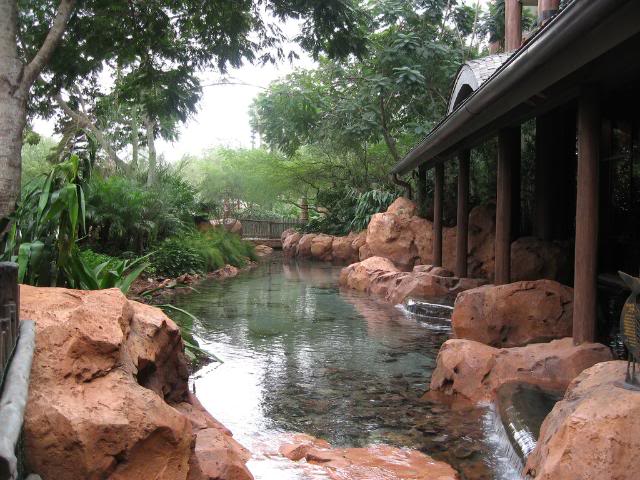 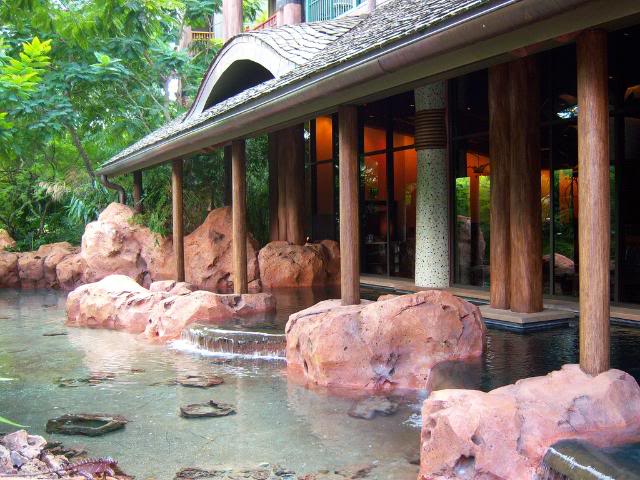 I gave Patrick the Valentine’s Day card I’d written to him two nights before our wedding. He got all teary, which made ME teary!

After dinner we sat in rocking chairs by the fire pit on the main savannah and watched an ill-behaved child attempt to torch the place by shoving larger and larger tree branches in the fire. We stayed until he and his family left, just to make sure it turned out all right.

Finally we went back to our room, where I stuffed down as much wedding cake as I could cuz the next day we were moving to the Grand Floridian, and I didn’t want to keep dragging that darn topper around.

At the end of the night when I sat down to write in my journal, I found a postcard with a picture of fireworks over Cinderella Castle. Patrick had written a very sweet Valentine’s Day note and signed it “Your husband,” which made my tummy all loopy. I think it finally sank in that we were really-for-real married!

Day 15: Lunch with an Imagineer