My journal entry for this day starts: “Another frigging magical day!”

It was Saturday, and we inveterate park tourers decided to sleep in for a change. When we got up, we took the monorail from the Contemporary to the Polynesian for brunch at Kona Café – our first spontaneous, non-ADR meal (gasp!). I made Patrick order the Tonga Toast because I’d heard so much about it but don’t eat bananas myself, and I had a delicious (Polynesian) trencherman’s breakfast of eggs, bacon, ham, sausage, macadamia nut pancakes, French toast and home fries. Burp! 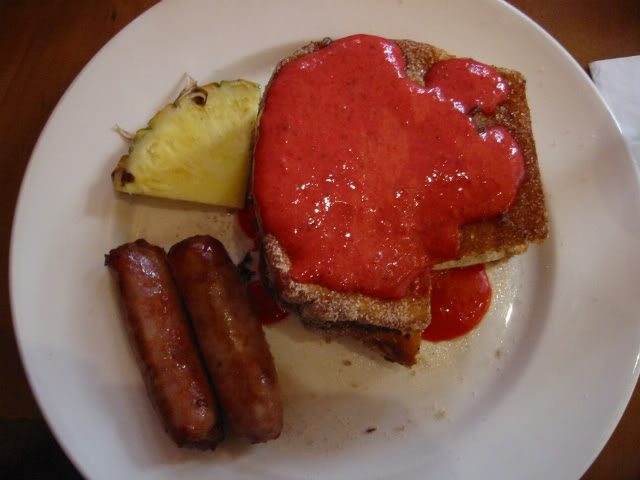 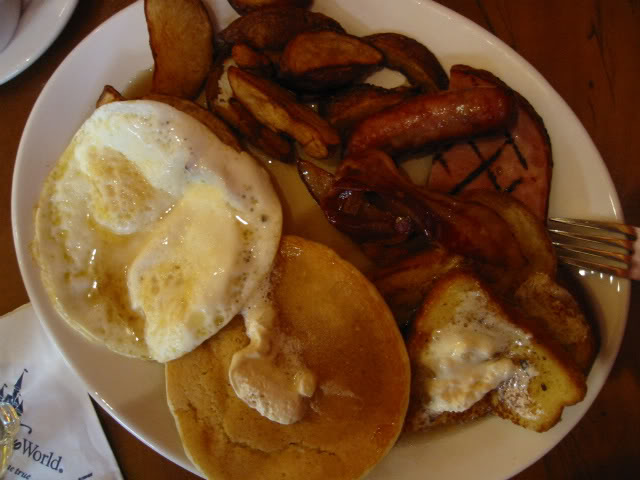 Afterward we took the monorail to the Grand Floridian to buy soaps at Basin. Patrick wanted to use a special one during our trip so we could sniff it later and always be reminded of our honeymoon. Awwwww! Coincidentally, the one that smelled the best had a bride and groom in it! (Imagine my dismay when I eventually had to separate them as the soap wore down and pieces began to fall out, including the groom’s head!)

From there we took the monorail to the Magic Kingdom and spent the morning walking up and down Main Street and soaking in all the theming. 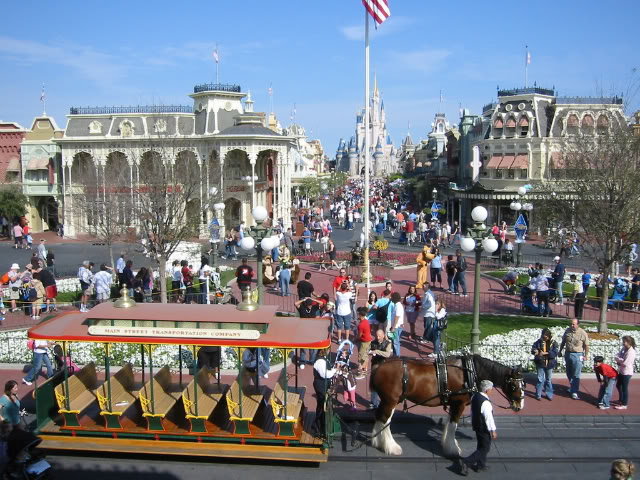 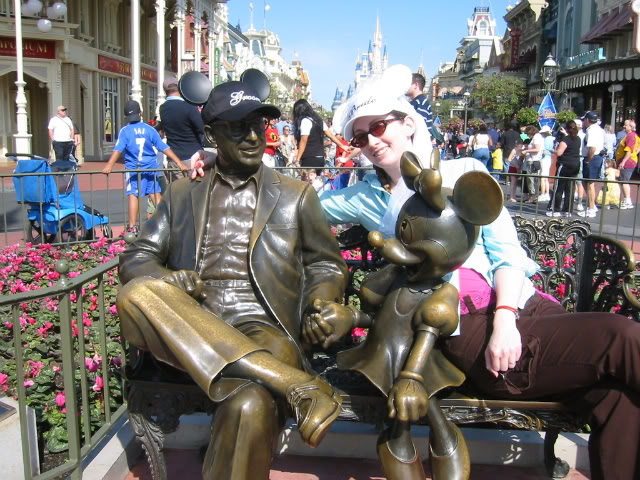 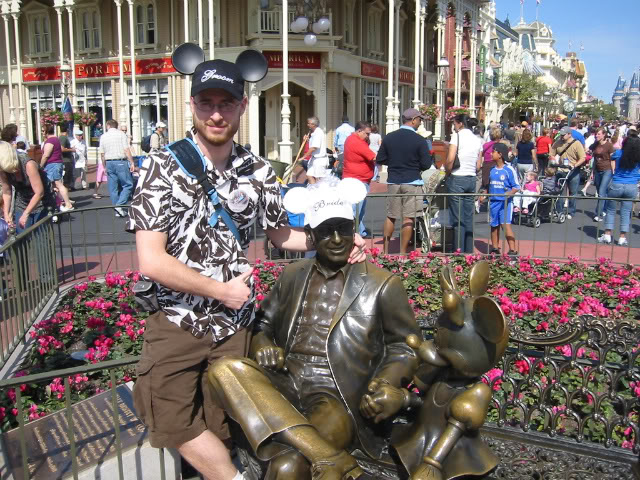 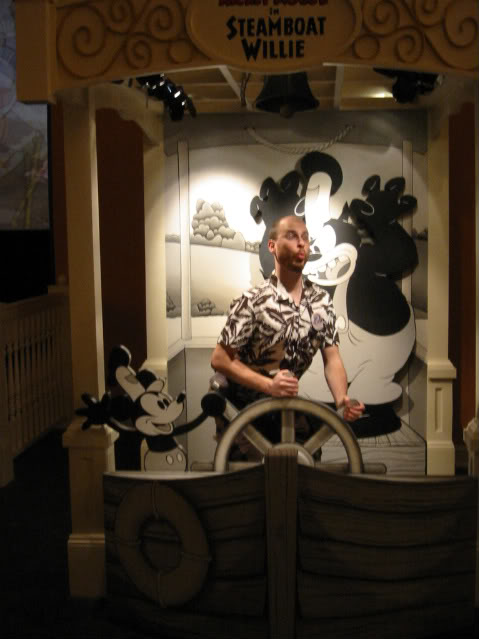 The first time we went to the Magic Kingdom, I had remarked on how loud the music was compared to on Main Street at Disneyland. 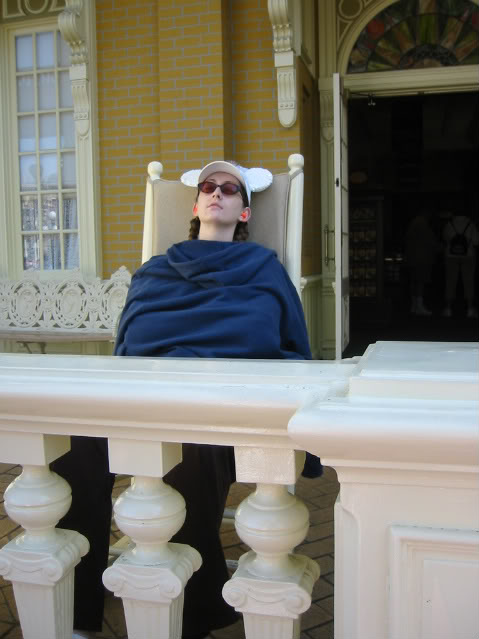 This time we figured out that they only blast it when a train pulls in, as if to say, “HOORAY! The train is here! Again! Just like it was 10 minutes ago! Let’s all celebrate by going deaf!!” 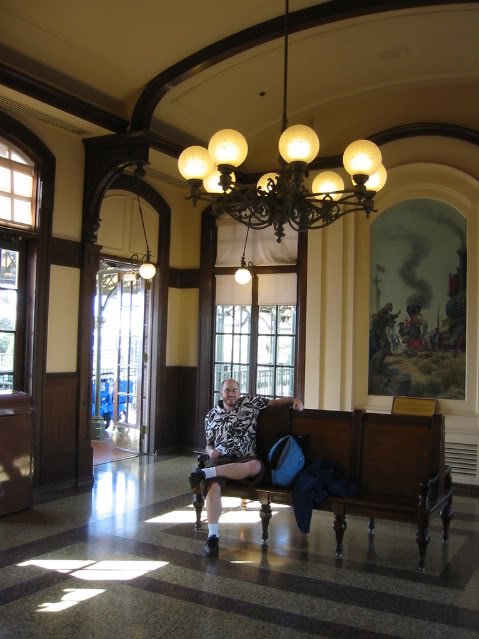 “I can tell the train’s a-comin’ cuz my ears are a-bleedin’!”

We had time to stop and listen to the Dapper Dans, who sang a lovely song to me and Patrick and another couple, who were celebrating their 63rd anniversary! You can bet we solicited advice from them… 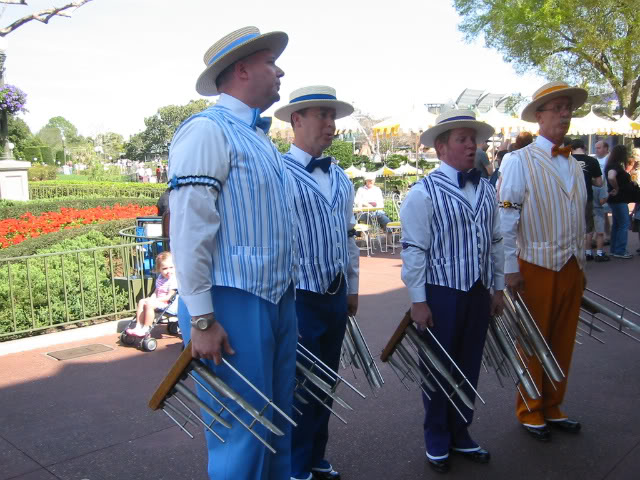 Then we walked back to the Contemporary and freshened up. On the way we discovered a duck nest against the window just inside the door to the Garden wing: 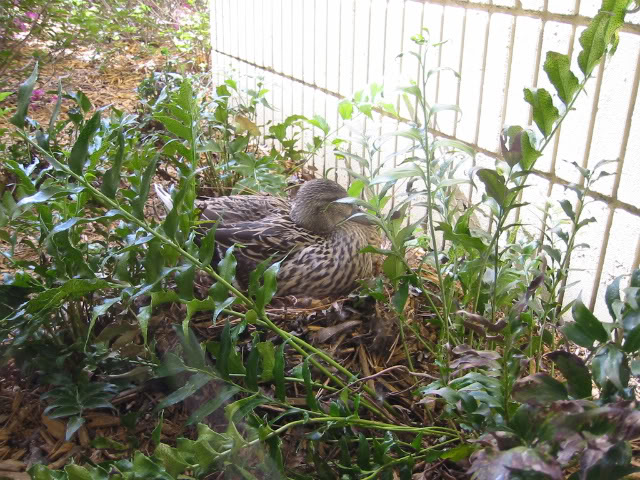 While we were in our room, I called about a “bounce-back” offer for returning guests in September. We’re such suckers – when we were in Walt Disney World for our planning session last September, they hooked us with a free-dining bounce-back offer for the following September. So I wanted to see if we could improve upon the plans we’d already made.

Next we caught the monorail to Epcot, where we got to sit up front with the driver. It turned out he used to live in SoCal and worked at Disneyland, so we all reminisced about it. He said he wanted to move back. 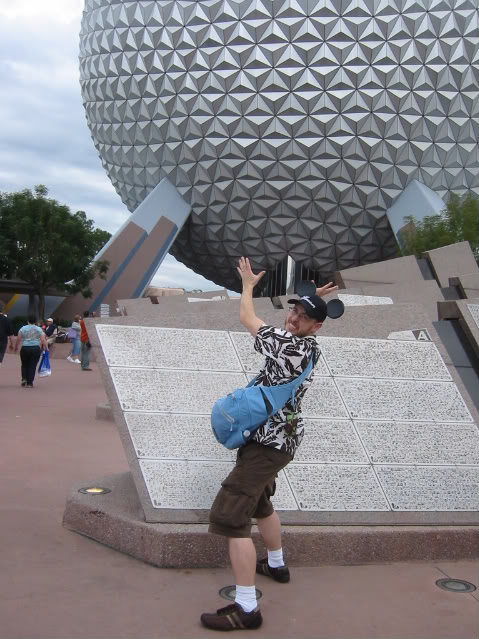 In Epcot we hit the attractions we’d missed on our commando day Thursday: Maelstrom (“Please stay for the 5-minute movie, PLEASE! No – wait, where are you going? Did I say 5 minutes? I meant 5 seconds. Pleeeeeeease!!!”), the China movie, and Ellen’s Universe of Energy (“Did we mention this ride is 37 minutes long? That’s right. Thir-ty… se-ven… MINUTES. There are no potty breaks. 37 minutes. All Ellen, all the time. THIRTY SEVEN MINUTES!!!! While you’re on the ride, we’ll be enjoying the delightful film in Norway… 58 times.”) 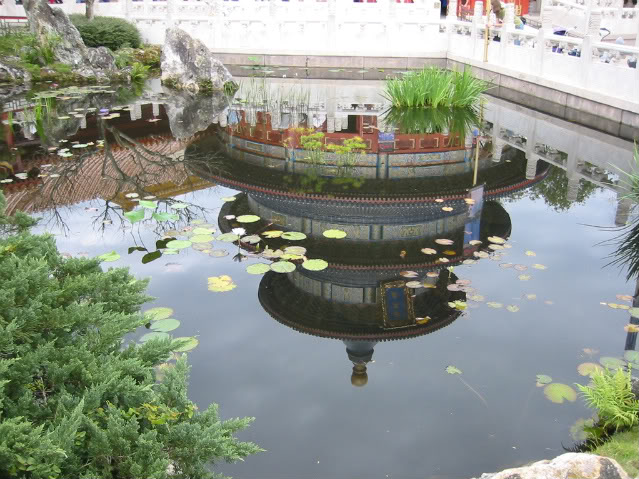 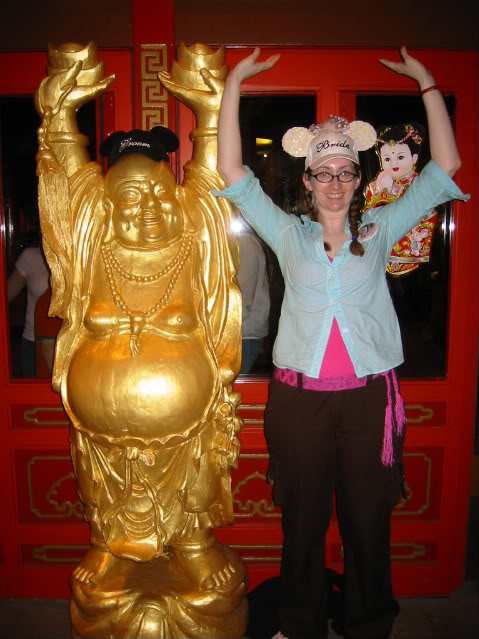 Just so you know, I was purposely sticking my belly out in this picture… 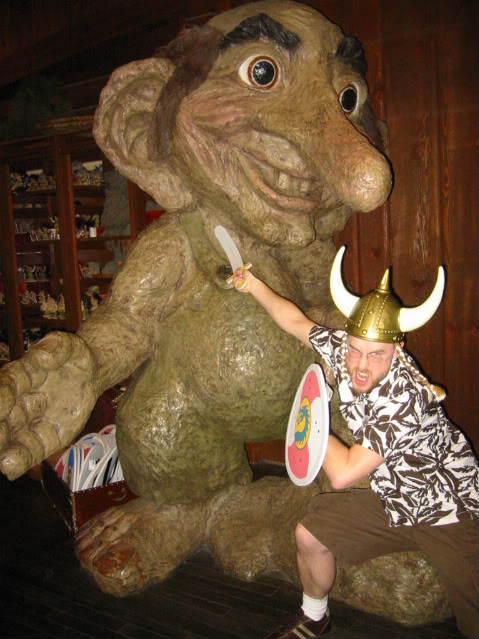 We also got to try out Segways for about 30 seconds each in Innoventions. 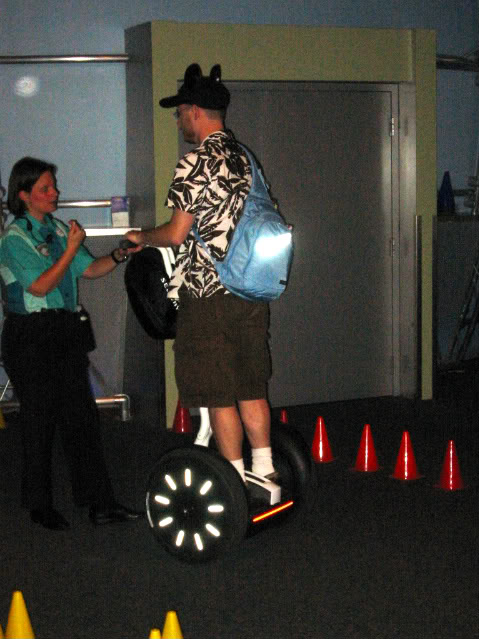 Then we saw a turtle in the murky water between Future World and the World Showcase. 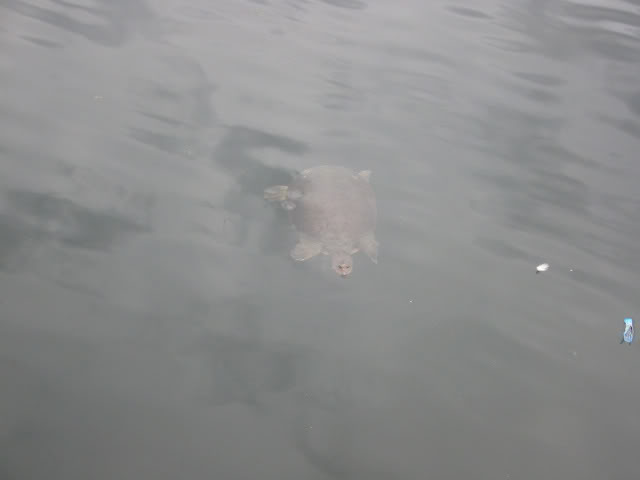 In the evening we had dinner at Bistro de Paris. The honeymoon note on the ADR worked – we got a table right by the window, where we could see IllumiNations! 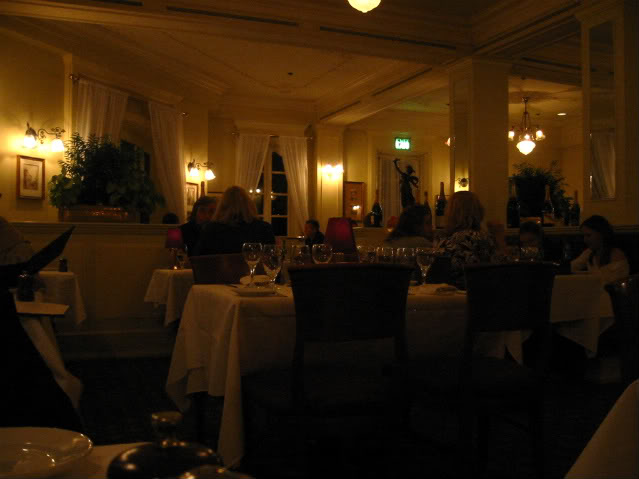 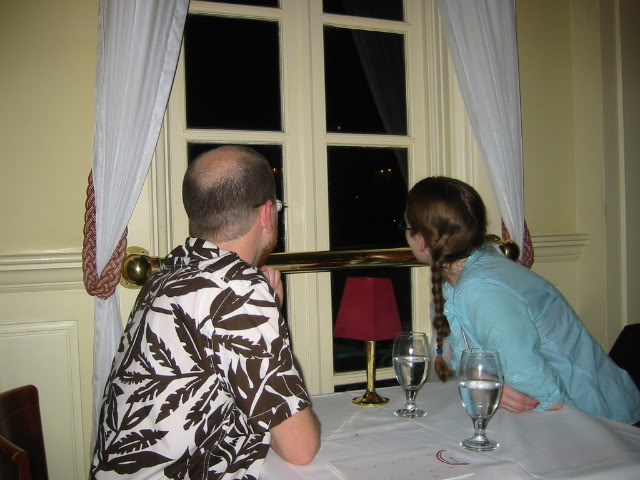 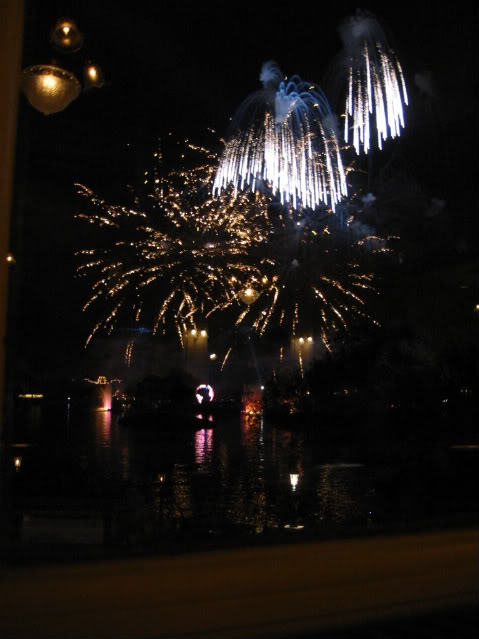 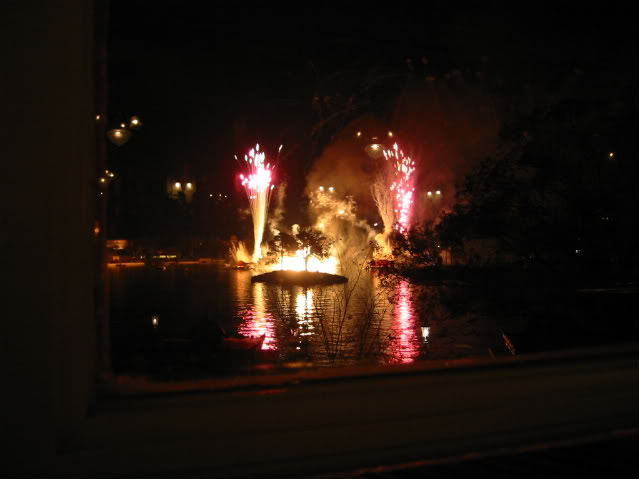 Patrick had duck (tastes like Cheetos!) and I had yet another filet. It was good, but not as good a piece of meat as the one at California Grill or Le Cellier. 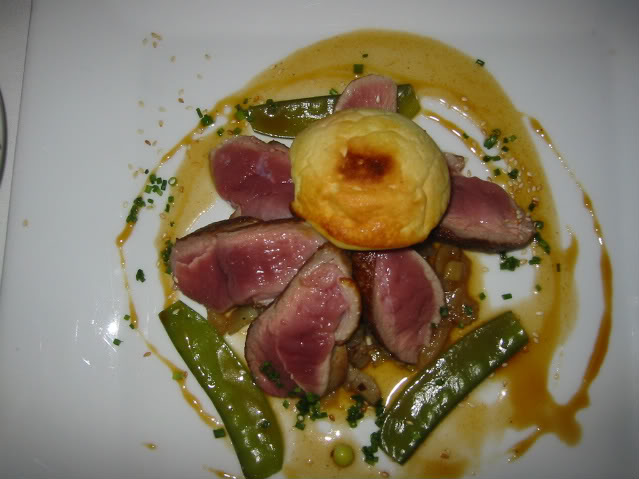 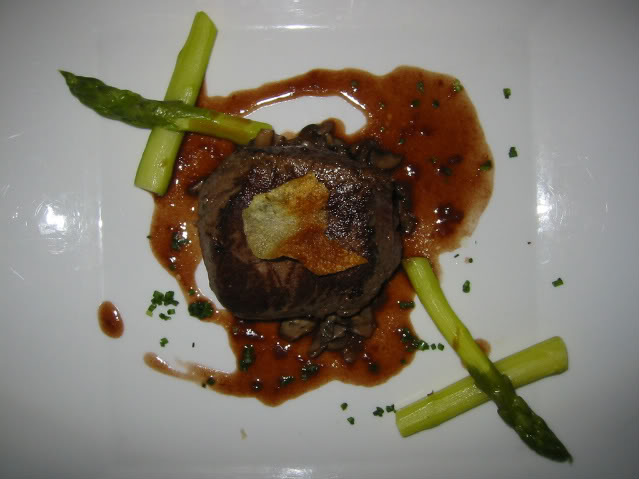 For dessert, which was not free, Patrick had apple crisp and I had peanut butter chocolate cake I’d smuggled in from Sunshine Seasons. It took forever to get our bill, so we got to watch the park clear out from our perch. Walking out of France toward the monorail was a bit like being in Epcot for our wedding because there was hardly anyone around. 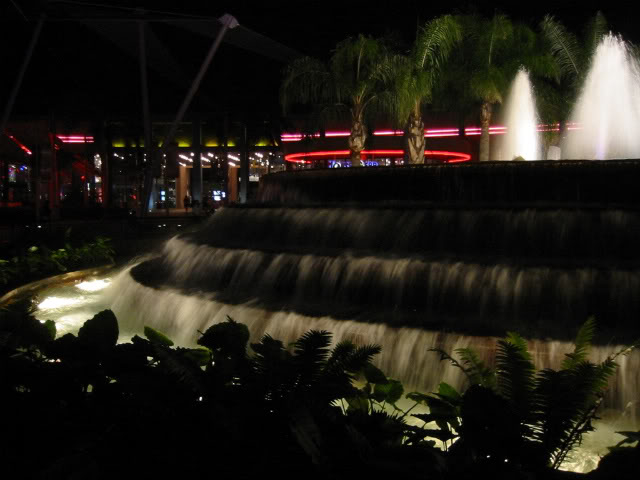 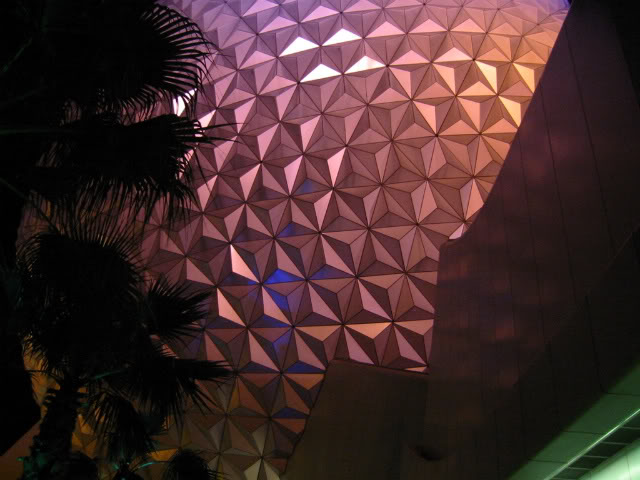 But we found everyone eventually – they were all trying to get on the monorail like we were. It took us an hour to get back to the Contemporary, and then we had to pack because the next day we moved to… Animal Kingdom Villas!

Day 10: Animal Kingdom—Is It Really Only a Half-Day Park?