After waiting so many years to see the Muppets on the big screen again, you probably don’t need any encouragement to go see The Muppets when it hits theaters Wednesday. But there are several reasons that you should see the movie twice.

The most obvious one is that we Muppet fans need to vote for the movie with our dollars. Before Jason Segel came along, Disney had never quite figured out what to do with the Muppets after buying them a second time. If this movie isn’t a financial success, it will be back to cheesy TV movies at best—and back on the shelf at worst!

But the big reason you need to see the movie twice is that—if you’re like me—you may spend your first viewing holding your breath and evaluating each scene to see how you feel about the direction they are taking the franchise instead of just enjoying the film. The first time we saw The Muppets, Patrick loved it immediately. I liked it a lot, but I had some reservations about things I didn’t think the characters would do or say. The second time we saw the movie, I stopped overthinking it and just allowed myself to be entertained. And I LOVED it!

If you’re looking for a fan’s review of the film, you can read a thoughtful, in-depth analysis that says just about everything I felt about the movie HERE. Suffice it to say, this movie is one big love letter to the Muppets, not some misguided attempt at making them more hip or relevant to today’s audiences. Yes, there are ironic ’80s gags and trendy song choices. But think about how “of its time” The Muppet Show was. When you watch it now, you may not know who half the hosts are or have ever heard the popular songs they sing. But you enjoy it because of the timeless characters and the huge amount of heart they display.

…And the other reason you should go see the movie is that Patrick’s in it!

A lot of people have been asking which scenes he puppeteered on, so I made a list. Thanks to modern movie magic, not a lot of puppeteers were required to bring the huge cast to life. (For example, when you see all the Muppets dancing in the arches to re-create the TV show opening, those were all performed by the same puppeteer and composited together.) So most of the work was done by the core group of performers who have done the characters for years now. However, Patrick was lucky enough to be on the list when they did need a lot of hands on the set, and he got to perform in a couple of big scenes.

Pitching in the Office of CDE Executive Veronica

The best place to look for Patrick is in the office of CDE TV executive Veronica (Rashida Jones), where he plays Animal and Floyd (simultaneously!). One of the most exciting things for a puppeteer is the chance to really communicate the personality of a character in even the briefest shot, so watch for Patrick’s take on Animal here. 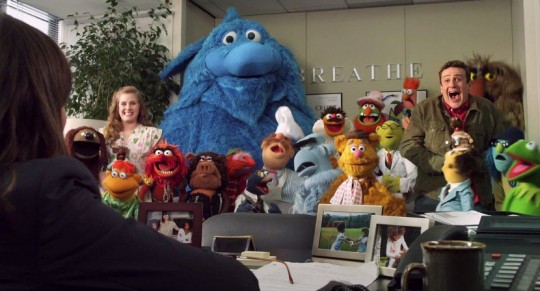 This shot over Kermit’s shoulder was done in multiple passes in order to get the maximum number of Muppets on screen, so Patrick plays three characters in three different spots. From left to right they are Bobby Benson, a chicken, and a character called Nigel. 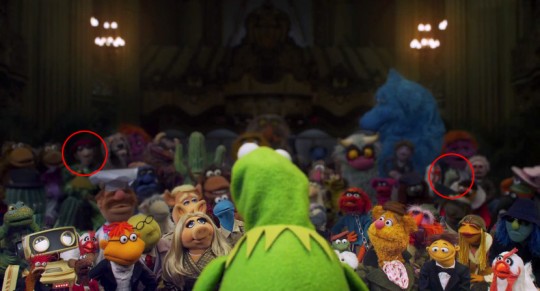 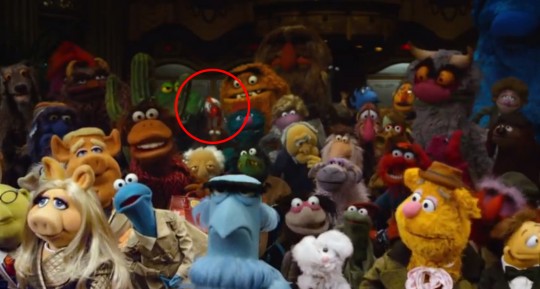 Another interesting bit of trivia: Three locations were used to represent the Muppet Theater. The exterior was Disney’s El Capitan Theatre, the lobby was that of the Los Angeles Theatre, and the auditorium was Stage 28, the set of Universal’s 1925 movie Phantom of the Opera.

OK, most of the puppets and people in this huge dance number are just specks as the camera pulls back, but you’ll know that Patrick was somewhere in the cluster of Muppets at the left of the screen, puppeteering his heart out! 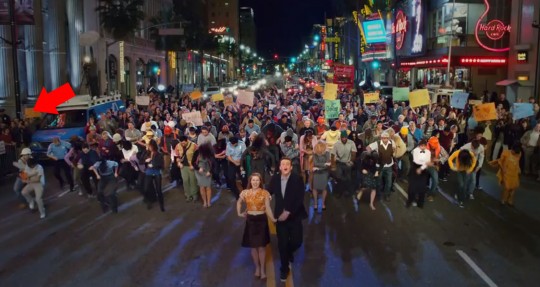 So what are you doing still reading this? Go buy your ticket to The Muppets right NOW!!!

The Fabulous Sounds of Christmas at Disneyland!