In case you missed it on ZannaLand, here’s my primer on D23 Expo 2011—everything you need to know at a glance!

D23 Expo 2011—”The Ultimate Fan Event”—takes over the Anaheim Convention Center Aug. 19-21. Falling somewhere between the chaos of Comic Con and the intimacy of the All Disneyana Show & Sale, this official event is a chance for Disney to connect with fans and showcase the new and forthcoming products in all its business lines, from film, television, and radio to theme parks and consumer products. Whether you were at the inaugural D23 Expo in 2009 or this will be your first time, here is an overview of everything you need to know about D23 Expo 2011. 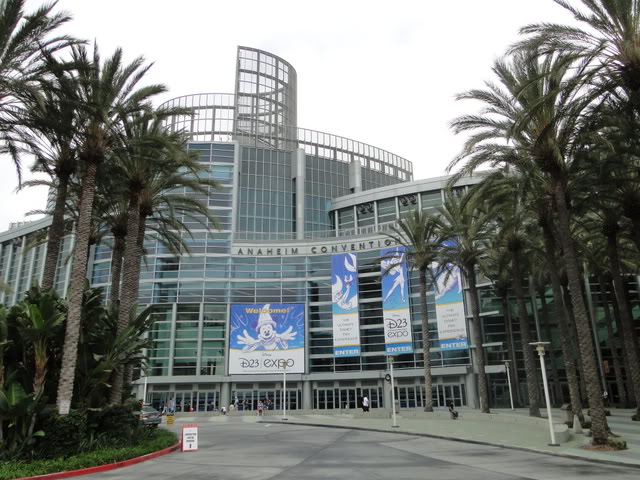 Located in Halls A, B and part of C, the D23 Expo Show Floor is where you’ll go to see Imagineering’s handiwork in the Walt Disney Parks & Resorts Pavilion, track down rare items in the Collectors’ Forum, purchase official Expo merchandise in the Dream Store, and visit the booths and exhibits of Disney’s various business lines. The show floor is open from 10:00 am to 7:00 pm daily, with a one-hour head start for D23 members beginning at 9:00 am.

Welcome Center
In addition to acting as an information booth and membership desk, the Welcome Center will host meet-and-greets with artists, authors, actors, filmmakers, and Disney celebrities including Don Hahn, Ridley Pearson and Dave Barry, Melissa Joan Hart and Joey Lawrence, and Dave Smith. Note that these take place in the Talent Round-up area across the aisle, not inside the Welcome Center itself. 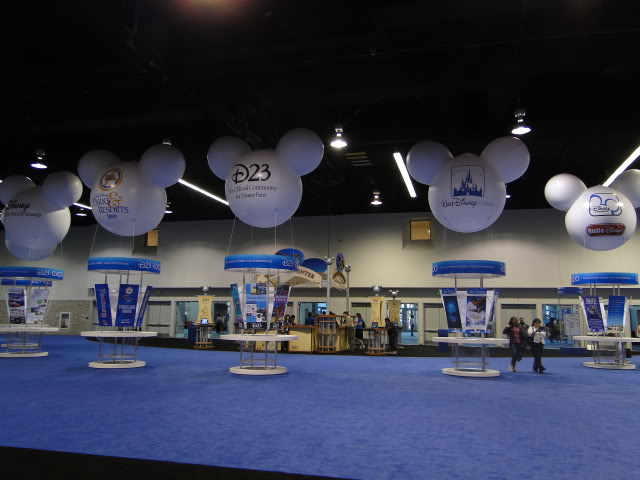 Disney Consumer Products’ Disney Living Pavilion
This is where you’ll find a showcase of the latest Disney merchandise, appearances by celebrity designers and artists, story time with Disney Publishing, and a performance by American Idol‘s Constantine Maroulis and Rock Star Mickey. This massive pavilion, which spans the lower quarter of Hall A, also houses “pop-up” locations of the Disney Store and A Small World Village (more information on these in the Shopping section, below). Additionally, there will be toy demos, mini-beauty treatments at the Disney Beauty Lounge, and party ideas at the Disney Celebrations exhibit.

Disney Channel & Radio Disney Pavilion
You’ll hear this pavilion before you see it because it’s the site of a nonstop series of dance parties, concerts by Radio Disney favorites, appearances by Disney Channel stars, and meet-and-greets with Disney characters. This is also the place for “Perry-Oke” sing-alongs at the Phineas & Ferb Platy-Bus. 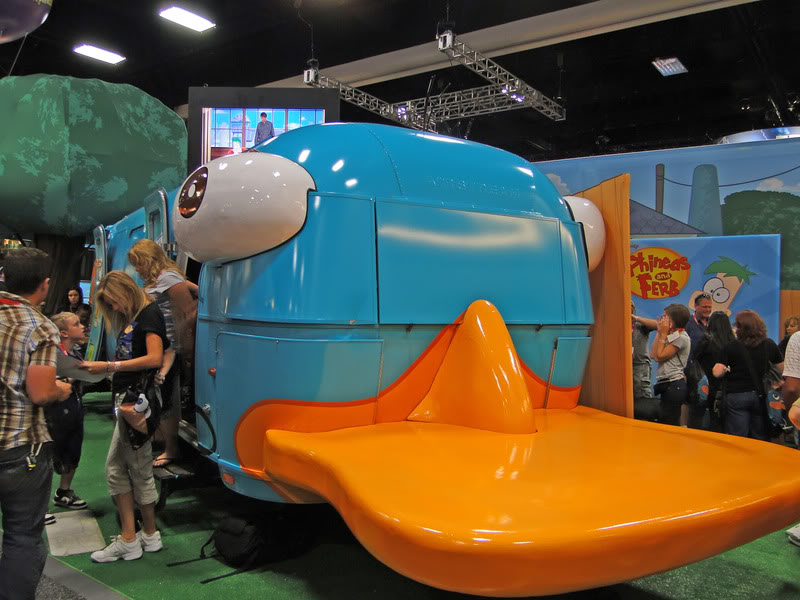 Walt Disney Studios In-Home Entertainment
This is the place to see Blu-ray 3D in action and learn about movie-viewing on mobile devices.

Disney Corporate Citizenship
The hub for Disney’s charity and environmental initiatives offers the opportunity to volunteer just a few minutes of your time at the Expo to make a big difference in the community. 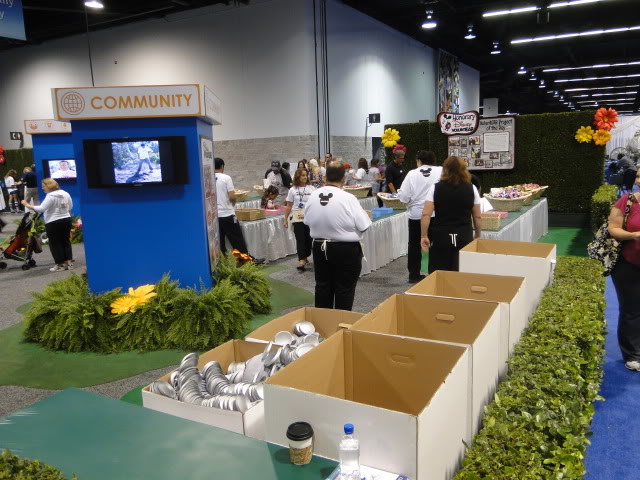 Walt Disney Parks & Resorts Carousel of Projects Pavilion
Probably the most entertaining area of the show floor, this pavilion spotlights the work of Walt Disney Imagineering at the parks around the world. You’ll get a behind-the-scenes look at the work on Disney California Adventure’s Cars Land and the Fantasyland expansion in the Magic Kingdom and have a chance to talk to real-live Imagineers about the projects they’ve worked on. There will also be exhibits on the inner workings of Audio-Animatronics, and last time there were meet-and-greets with advanced AA figures Wall-E and Lucky the Dinosaur. Elsewhere in the pavilion, you’ll find displays by Disney Cruise Line, Disney Vacation Club and Adventures By Disney. 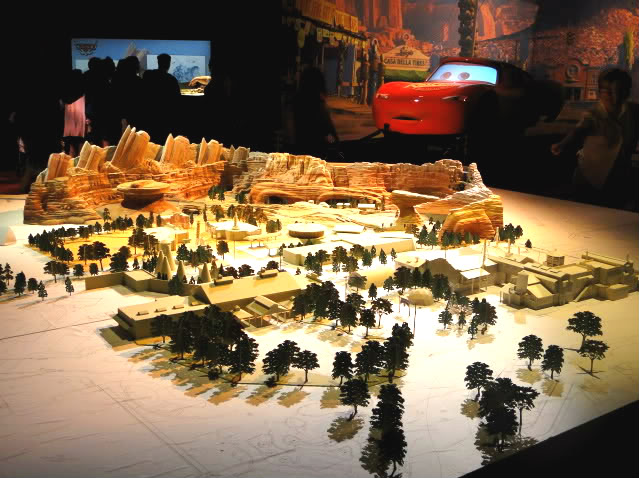 Collectors Forum
This area serves as a catchall for independent vendors of Disney art and collectibles, fan sites and message boards, and Disney travel agents. It’s also the place to meet Disney celebrities like Bill Farmer (Goofy), Paige O’Hara (Belle), Margaret Kerry (Tinker Bell), and Susan Egan (Megara, Belle on Broadway) at the Disneyana Fan Club booth. An outlet of the United States Postal Service will be handy for those who’ve gone on a D23 Expo shopping spree.

Disney Desk – Park Ticket Sales Center
Disney will be selling Expo attendees discounted “Twilight” tickets to Disneyland and Disney California Adventure that are good after 4:00 pm or 4 hours before the park closes, whichever comes first. Rates are $55 for a 1-day, 1-park Twilight ticket (vs. $80 for a full day) or $70 for a 1-day Twilight Park Hopper (vs. $105 for a full day). A full-day Park Hopper can be purchased at $8 off the regular adult or child price. Disney will also sell multiday Park Hoppers for $25 off the 3-day price, $30 off the 4-day price, or $35 off the 5-day price for adults and children.

The 4,000-seat arena hosts all the major Expo events, from the Disney Legends Ceremony and 3-D screening of The Lion King to the presentations by Walt Disney Studios and Walt Disney Parks & Resorts. The Studios presentation is the one to hit for celebrity sightings, with Jason Segel, Kermit the Frog and Miss Piggy, Willem Dafoe, Kelly Macdonald, Jennifer Garner, Sarah Silverman, and cast members from Marvel’s The Avengers on tap at press time. Fans of the Disney princesses will want to check out Friday morning’s 2011 Disney Legends Awards Ceremony, which honors the women who provided voices for Ariel, Belle, Jasmine and Tiana. The Walt Disney Parks & Resorts presentation will provide a look at upcoming projects at Disney parks around the world, although last time the promised surprises were the same information that had been floating around the Internet for weeks or months already. 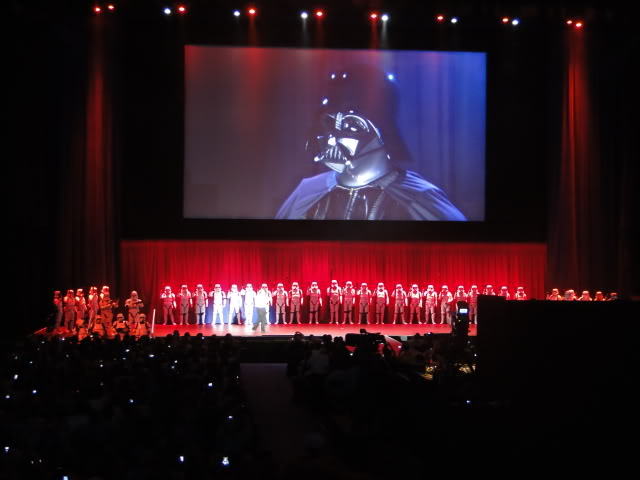 You only need to wait in the ginormous arena queue if you absolutely have to get a seat in the first few rows. Also, attendees will be required to turn over their cell phones, cameras, and other recording devices on the way in to the Walt Disney Studios presentation. This creates long lines before and after the event; allow extra time or find another place to stash these devices so that you can skip the check-in lines.

You’ll need to travel upstairs to see the various seminars, panels, and events with Disney celebrities, plus the Treasures of the Walt Disney Archives. For a complete schedule, click HERE to download the official D23 Expo 2011 Guide Book.

Stage 28
The majority of the historical and Imagineering seminars at D23 Expo 11 will take place inside Stage 28. These are the kinds of presentations found at D23’s Destination D events at Disneyland and Walt Disney World: in-depth examinations of the development of parks and attractions, plus interviews with the people who were there. Stage 28 holds just 500 people and was frequently packed to capacity at D23 Expo 2009, so be sure to get in line early. 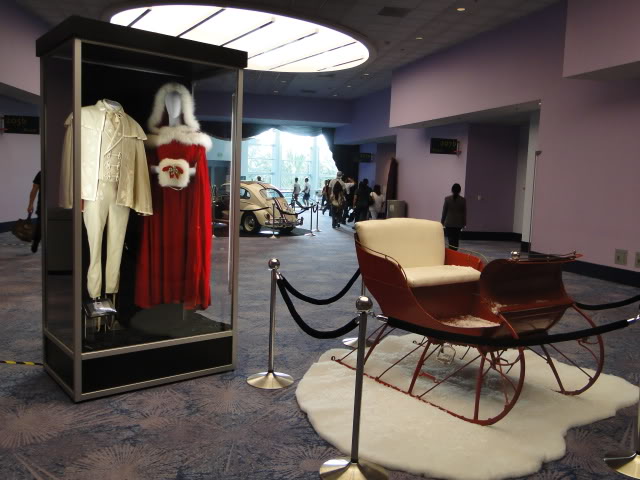 Outside the Treasures of the Walt Disney Archives exhibit in 2009

D23 Expo Live Auction Preview Room
If you don’t want to pay $45 for a ticket to the D23 Expo Live Auction on Saturday night, you can preview the lots on the second floor of the convention center. Up for live auction are original attraction vehicles, props, art pieces, tours, and experiences—a complete list can be found at HERE. To see a few of the silent auction lots, click HERE. 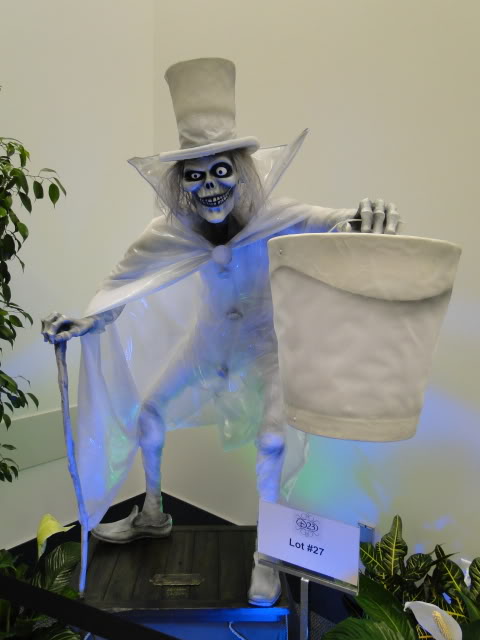 There’s only one venue on the third floor of the convention center, and that’s…

Stage 23
Not to be confused with Stage 28, this theater hosts mostly screenings and events for the first two days of the Expo, including the Pixar shorts collection, the Dick Van Dyke & The Vantastix concert, the Ultimate Disney Trivia Tournament and the D23 Expo Live Auction. On Sunday it becomes home to the kinds of theme park history and Imagineering seminars found on Stage 28, like “Imagineering Cars Land” and “The Making of Star Tours – The Adventures Continue.” Although it can hold 750 people, Stage 28 (then known as Walt Disney Studios Theater) was often packed to capacity in 2009, so get in line early for hot-ticket presentations featuring popular names. (Note: D23 just announced that they’d increased seating capacity for the Dick Van Dyke show to 1,000—a step in the right direction!)

Disney provides numerous “shopportunites” at the expo, including plenty of limited-edition and exclusive merchandise.

D23 Expo 2011 Dream Store
This is the place for limited-edition Expo merchandise, theme park products, jewelry, ACME art, and autograph sessions. Each day will see the release of items themed to a specific Disney classic: 101 Dalmatians on Friday, Dumbo on Saturday, and Alice in Wonderland on Sunday. Last time, Disney handed out tickets to those in the pre-opening line that allowed them to return at any time that day to pick up the limited-edition items they wanted. While certain products remained available throughout the Expo, others sold out to those at the front of the line, so be sure to get there early if these are important to you. Partial lists of D23 Expo merchandise can be found HERE, HERE, HERE and HERE! 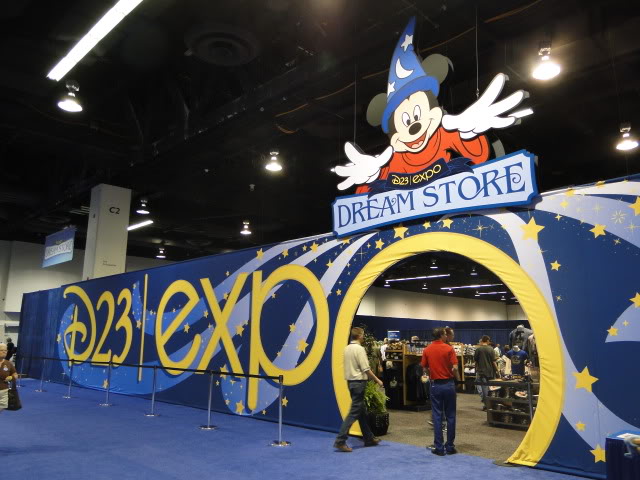 Mickey’s of Glendale
Although it has been a fixture at the Disneyana Fan Club’s All Disneyana Show & Sale for a few years, Mickey’s of Glendale makes its D23 Expo debut in 2011. This satellite location of the employee store at Walt Disney Imagineering will be inside the Walt Disney Parks and Resorts Carousel of Projects pavilion selling WDI-exclusive apparel, accessories, pins, and art, plus merchandise inspired by the projects on display in the pavilion. Pin collectors, take note: There will be several limited-edition D23 Expo pins sold only at Mickey’s of Glendale. Also, they usually have a few bins of $4 and $5 WDI pins that make great traders.

Disney Store
The Disney Living Pavilion is the site of a 1,500-square-foot pop-up Disney Store, which will kick off its 25th anniversary celebration with a D23 members-only presentation at 9:00 am on August 19. The first 25 people in line will receive a commemorative pin. Additional members-only opening ceremonies will be held at the same time on Saturday and Sunday. Note that only 500 of the Disney Store 25th anniversary Vinylmation figures will be sold at the Expo, but 2,000 more will be available to D23 members online. 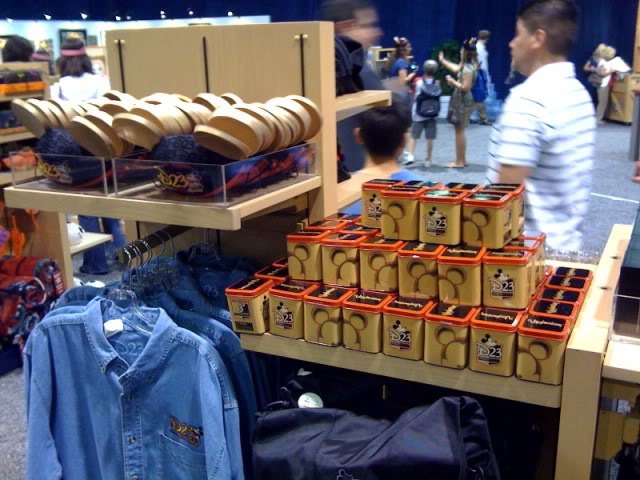 All concessions are handled by Aramark, whose food you may recognize from arenas, convention centers, and stadiums across the country. If you have special dietary requirements or are just a fan of fresh food, you may want to explore the options right outside the convention center in an area known as CenterWalk.

A complete list of dining locations and menu items can be found in my article Where to Eat at D23 Expo 2011.

See you at the Expo!

You can read my account of the inaugural D23 Expo in D23 Expo The “All-Lines, No-Rides” Disney Experience! and follow my adventures at D23 Expo 2011 as @lurkyloo on Twitter.