In case you missed it on The Disney Food Blog, here’s my comprehensive look at dining locations and menu items at D23 Expo 2011, plus some insider info on the reduced number of eateries at this year’s event and where those “Disney” treats really come from…

The first thing to know is that all concessions are handled by Aramark, whose food you may recognize from arenas, convention centers and stadiums across the country. Disney will augment these offerings with a few treats brought in from the parks, namely Mickey premium ice cream bars and Mickey pretzels. Two other Disney park favorites—churros and fudge—will be made by Aramark. However, you’ll find that their churros taste familiar because Aramark also makes the ones sold in the parks. And you might even like their fudge better than Disney’s! 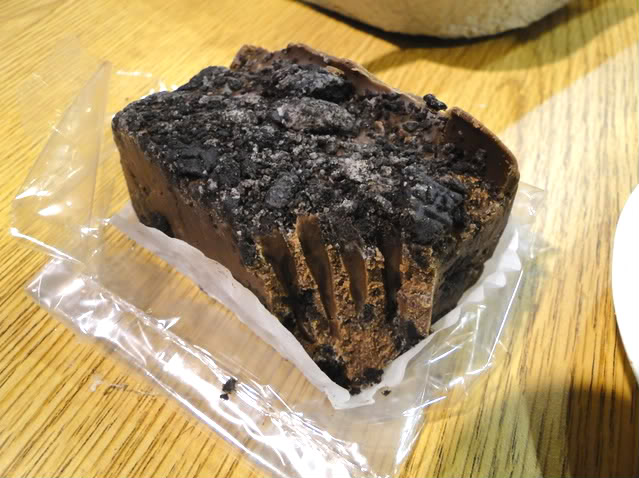 D23 Expo Fudge (Those are totally not teeth marks—honest!)

The D23 Expo Show Floor will occupy only two of the facility’s four ground-floor exhibit halls this time around, and most of the event’s food service has been consolidated within them. This leaves just two indoor counter-service spots, one outdoor spot, a lunch cart on the second floor, and a coffee stand in the lobby. Gone are the rooftop kabob stand and access to the Arena Grill, which had the most diverse offerings and the freshest food at the last Expo.

Let’s take a look at dining options in each area of the convention center so you’ll know what’s nearby as you wander the show floor or wait in line. I’ll also offer tips for making the most of your D23 Expo dining and snacking experience.

Eco-Grounds
This specialty coffee stand will offer packaged salads, sandwiches and wraps, along with freshly made mini-doughnuts. Fresh funnel cakes will be available in the afternoon.

Located in Halls A & B, the D23 Expo Show Floor is where you’ll go to see Imagineering’s handiwork in the Walt Disney Parks & Resorts Pavilion, track down rare items in the Collectors’ Forum, purchase official Expo merchandise in the Dream Store, and visit the booths and exhibits of Disney’s various business lines.

Each hall has a counter-service spot that serves grab ‘n’ go items and a limited selection of hot items from 8:30 am to 7:00 pm, plus hot specialty items from 10:30 am to 5:30 pm. While the specialty menu varies by location, the other offerings are the same at both places. Breakfast consists of Danish, muffins, bagels, whole fruit and fruit cups, yogurt, cereal, juice, coffee, tea and hot chocolate. All-day items include hot dogs, Mickey pretzels, nachos, churros, chips, cookies, whole fruit, soft drinks and juice. Grab ‘n’ go items are fruit cups, vegetables with dip, wraps, deli sandwiches, salads and packages of celery and peanut butter, apple slices and peanut butter, or carrots and celery.

Additionally, there will be a barbecue stand on the patio between the two halls (10:30 am–2:30 pm), two ice cream stands, and a combination mini-doughnut and candy stand.

The Eat Ticket – Hall A
Disney has renamed 2009’s Stromboli Trattoria counter-service location “The Eat Ticket” (get it?) but retained the vaguely Italian menu. In addition to the breakfast, all-day, and grab ‘n’ go items listed above, The Eat Ticket will offer a specialty menu from 10:30 am to 5:30 pm featuring Freschetta pizza, hot sandwiches (last time these were meatball, sausage, or parmesan chicken), made-to-order deli sandwiches, and soup. A kids’ meal was not specified at press time, but previously this location served chicken fingers.

Buena Vista Commissary – Hall B
Now named after the cafeteria on the Walt Disney Studios lot, this counter-service spot offers all the same breakfast, all-day, and grab ‘n’ go items as The Eat Ticket. From 10:30 am to 5:30 pm you can get hot items from the All-American Grill (think hamburgers, cheeseburgers and chicken sandwiches), plus chicken tenders, loaded fries and made-to-order deli sandwiches. A kids’ meal was not specified at press time, but previously this location served grilled cheese. 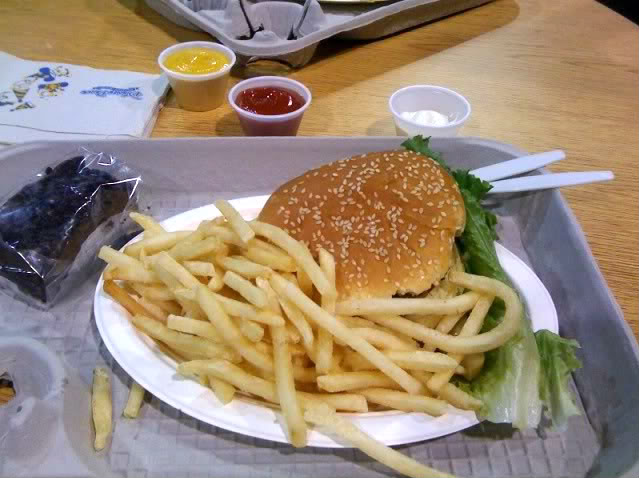 Hamburger from what is now the Buena Vista Commissary

The Inn Between BBQ – Hall A & B Courtyard
This outdoor eatery between the two halls will be aptly named “The Inn Between” after the cast member cafeteria located backstage at Disneyland, between Main Street, U.S.A. and Tomorrowland. Open only from 10:30 am to 2:30 pm, the stand will offer barbecued hamburgers, cheeseburgers, turkey burgers and hot link sausages; brisket and chicken kabob sandwiches with barbecue sauce; and roasted corn on the cob with various seasonings. Sides include coleslaw, potato salad, baked beans and watermelon wedges. The full grab ‘n’ go menu is also available at this location. The kids’ meal will be macaroni and cheese with sliced apples and milk or juice.

Grab ‘N Go Sweets & Treats
Offering a sugar coma-inducing combination of fresh mini-doughnuts, candy apples, fudge, giant cookies, brownies and assorted chocolate candies, this stand is not to be missed. This year it will be located in Hall B between the D23 Welcome Center and the Disney Living Pavilion. 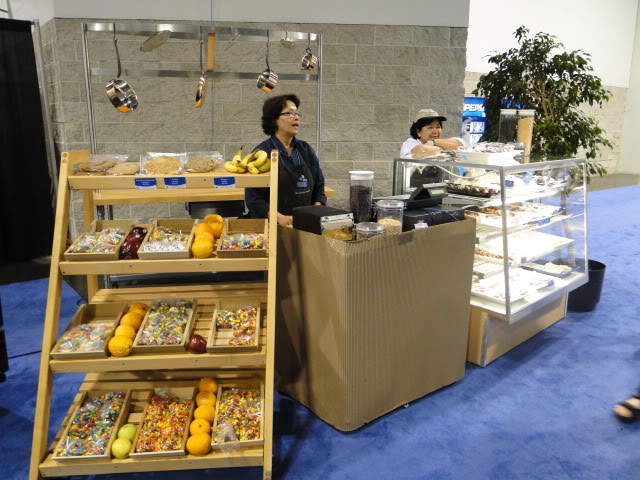 Grab ‘N Go Ice Cream & Grab ‘N Go Coffee Cart
These two stands will sell soft-serve ice ice cream with brightly colored flavor swirls or crunchy mix-ins, along with bottled drinks, coffee, and pastries. They’ll be located next to each other in Hall A, between the restrooms and the Walt Disney Studios In-Home Entertainment booth.

The 4,000-seat arena hosts all the major Expo events, from the Disney Legends Ceremony and 3-D screening of The Lion King to the presentations by Walt Disney Studios and Walt Disney Parks & Resorts. The Arena Grill will not be open this year, but snacks can be found in the lobby’s vending machines.

A welcome addition this time around is a roaming cart selling beverages and snacks to those waiting in the queue for the Arena.

The second floor is where you’ll go to see various seminars and panels, plus the Treasures of the Walt Disney Archives. Unfortunately, the place where you’ll spend the most time waiting around has only one small food-service location.

The Lunch Spot
Located at the top of the middle set of escalators leading to the second floor, near Room 204, this cart offers coffee and pastries like scones, croissants, muffins and cinnamon rolls. You’ll also find grab ‘n’ go sandwiches, salads and wraps, along with a kids’ meal (in 2009 it was a peanut butter and jelly sandwich). 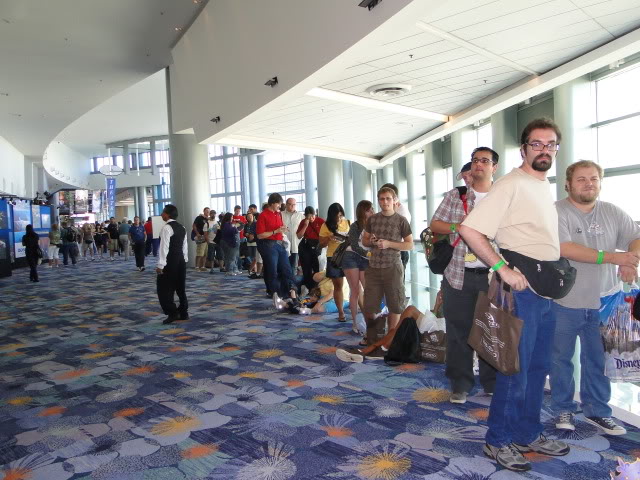 This would be a great time to eat lunch!

The only venue on the third floor is Stage 23, site of the larger presentations, various screenings, the trivia tournament, the live auction, and the concert by Dick Van Dyke & The Vantastix. Unfortunately, there is no food service on this floor.

See you at the Expo!