When a Disney movie opens in Los Angeles, it opens at Disney’s El Capitan Theatre on Hollywood Boulevard, so Patrick and I find ourselves there often. Seeing a movie at the El Capitan is a real event, complete with a pre-show concert of Disney tunes played on the Mighty Wurlitzer organ, a Disney character-filled stage show themed to the feature presentation, and even a mini show on the curtain as it rises.

But considering how frequently we’re at the El Capitan, we know very little about its history, besides that it was restored by Disney and that the first movie to open there after the restoration was The Rocketeer. So when we saw that the Los Angeles Historic Theatre Foundation was offering a backstage tour this past weekend, we jumped at the chance to learn more. 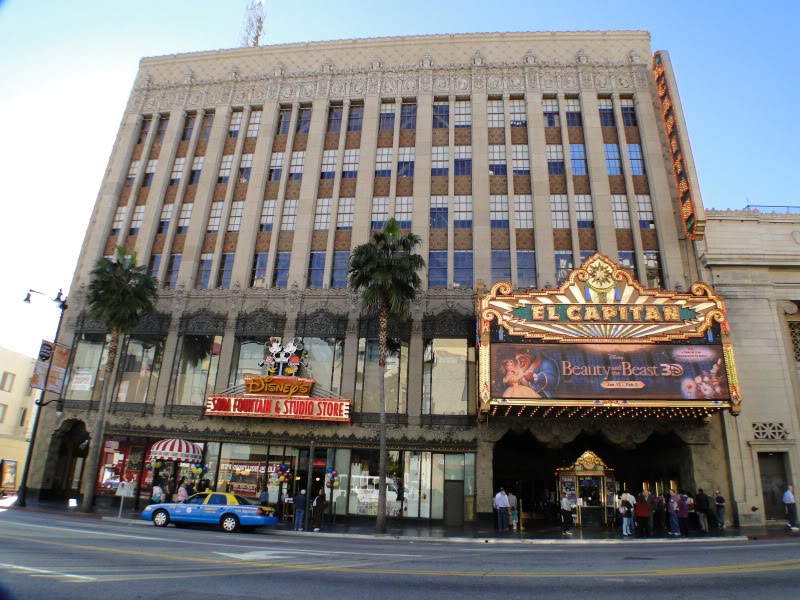 The tour was supposed to start at 8am so that we could be out in time for the first public screening that day. Unfortunately, it got off to a late start, and the presentations ran long, which meant that the actual tour was run rather briskly, with little time to linger and take photos. Still, you’ll see we got a ton — mostly because it was a treat to get behind-the-scenes shots we’d never be allowed to take backstage at a Disney park!

Because there’s so much to show you, I’ll break the recap into two posts, one about the history we learned during the first half of the presentation and one with the backstage tour.

The first part of the event was a concert by staff organist Ed Vodicka. We always enjoy listening to house organist Rob Richards playing Disney music before the movies, but it was an unexpected treat to hear a broader range of selections, including everything from “Stars & Stripes Forever” to “Aquarela do Brasil” (which Vodicka picked for its 1930s popularity but also happens to be featured in Saludos Amigos), played without the addition of the usual iPod backing tracks. If such a thing as a smokin’ organ solo exists, it’s the one Vodicka played in his rendition of “Friend Like Me.” 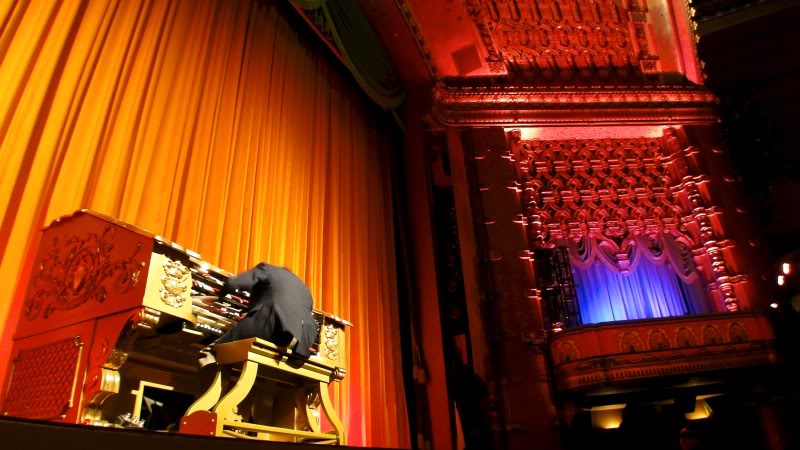 The Mighty Wurlitzer organ is not original to the El Capitan. It started life at the Fox Theatre in San Francisco and passed into private hands when that theater was demolished. According to one of our fellow tourgoers, the organ became one of the centerpieces around which the restoration of Glendale’s Alex Theater was launched, until it proved to be too big to fit in the space. Disney brought the organ to the El Capitan during a second phase of renovation in 1998, carving out space in the orchestra pit under the first few rows of seating and employing a single-shaft spiral lift to elevate the organ to stage height during performances. 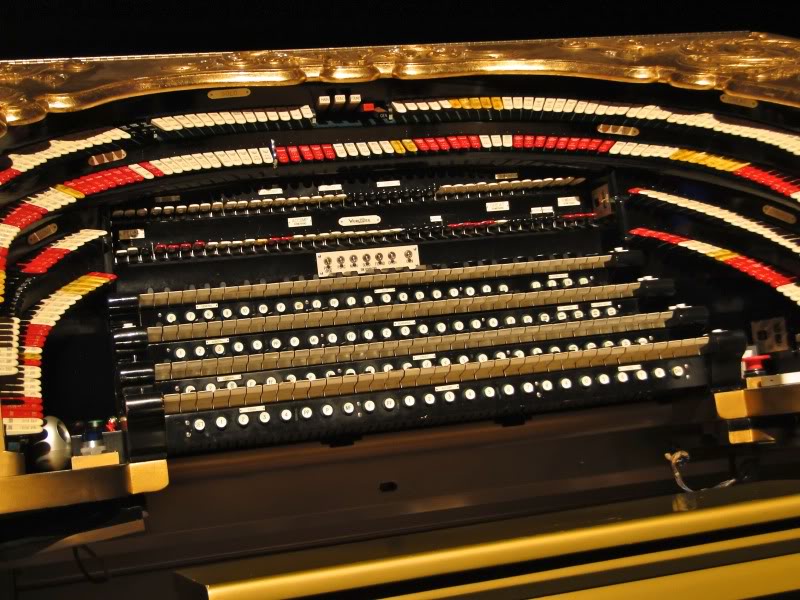 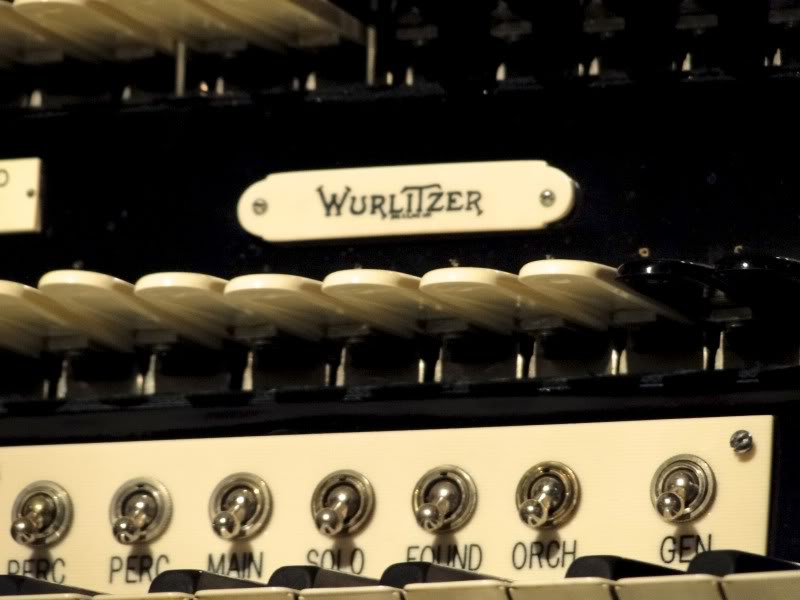 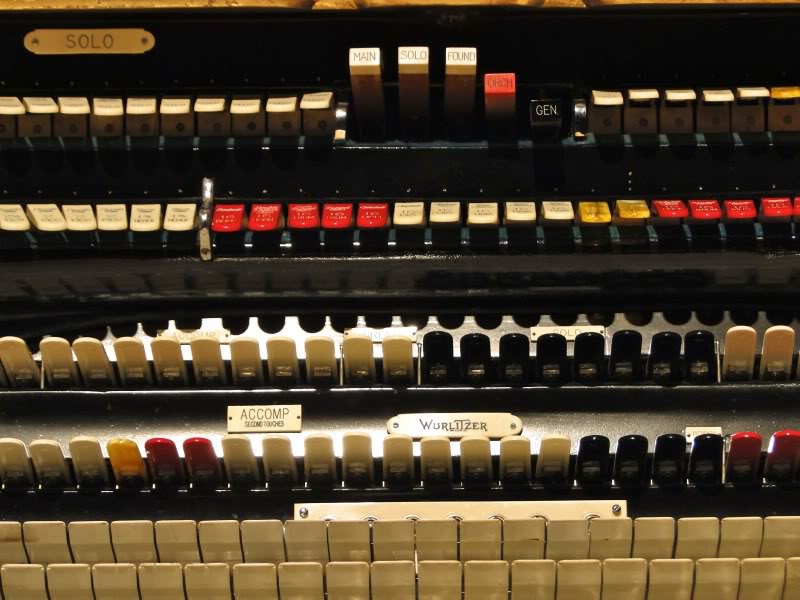 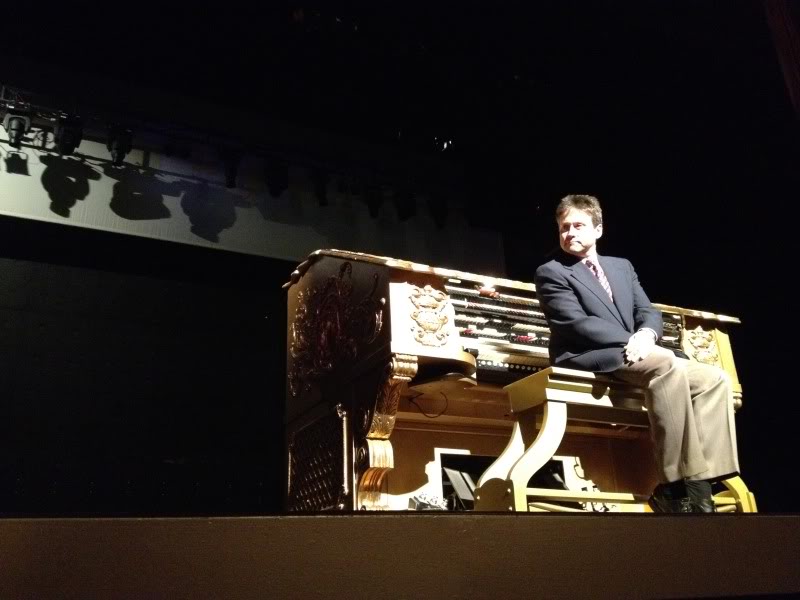 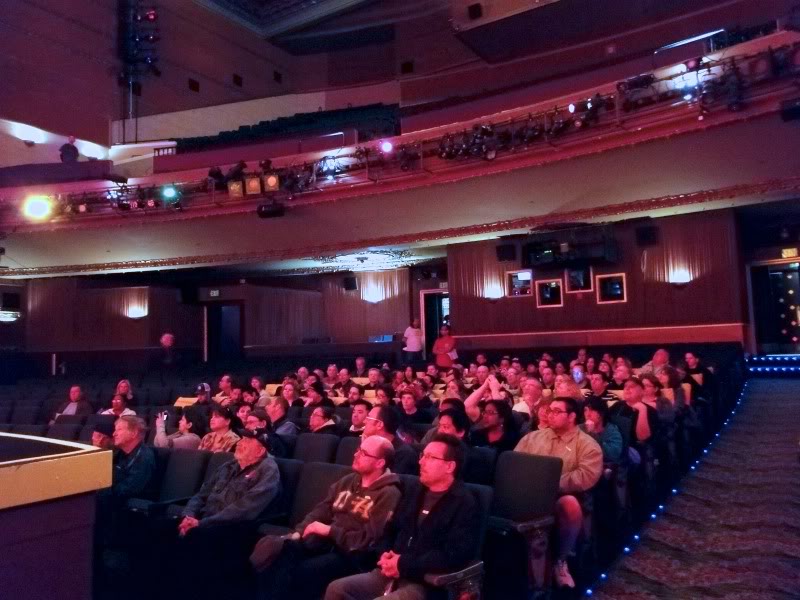 Next we heard from representatives of the Los Angeles Historic Theatre Foundation and the El Capitan, including El Capitan Executive Director Ed Collins, who spearheaded the 1989–1991 renovations. They gave us a bit of history over a slideshow presentation, which we weren’t allowed to photograph. A couple of the shots are on the walls in the upstairs lobby, though, and I’ll give you links to the others below.

The El Capitan was opened as a legitimate theater in 1926 by “Father of Hollywood” Charles Tolberman and Sid Grauman, just a few years after their Egyptian Theater and one year before the Chinese Theater. 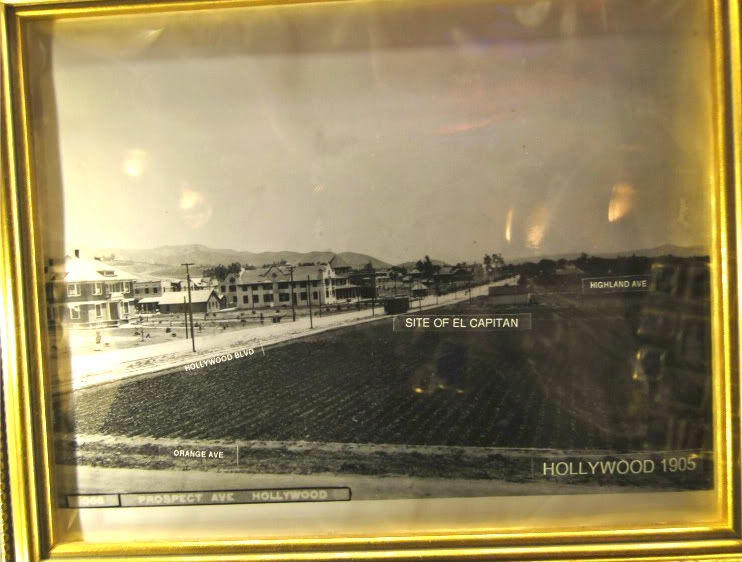 The exterior was designed in the Spanish Colonial Revival style by the same architect who did the Mayan Theater downtown, and the interior was done in the East Indian style by G. Albert Lansburgh at the same time he was designing those of the Orpheum Theater and the Shrine Auditorium. Talk about a pedigree!

You can see photos of the original theater HERE. Some of the differences you might notice are the low wall at the back of the theater, which originally separated seating from standing-room-only but has now been replaced by a full wall the separates the theater from the lobby. 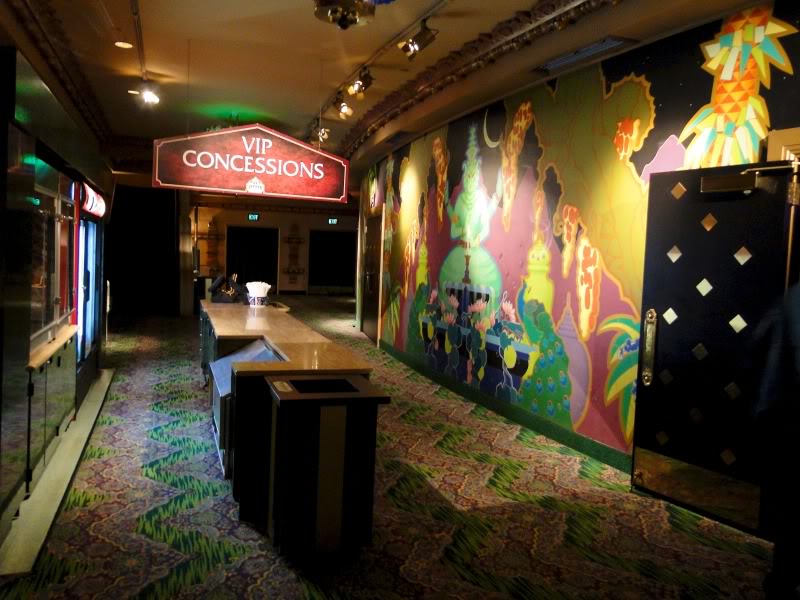 The original configuration had a very shallow interior lobby and relied mostly on the exterior “storm lobby.” Three ticket booths were built into one exterior wall. Although the compartment is still there (and appears to be used as a closet) the three windows are now poster display cases. 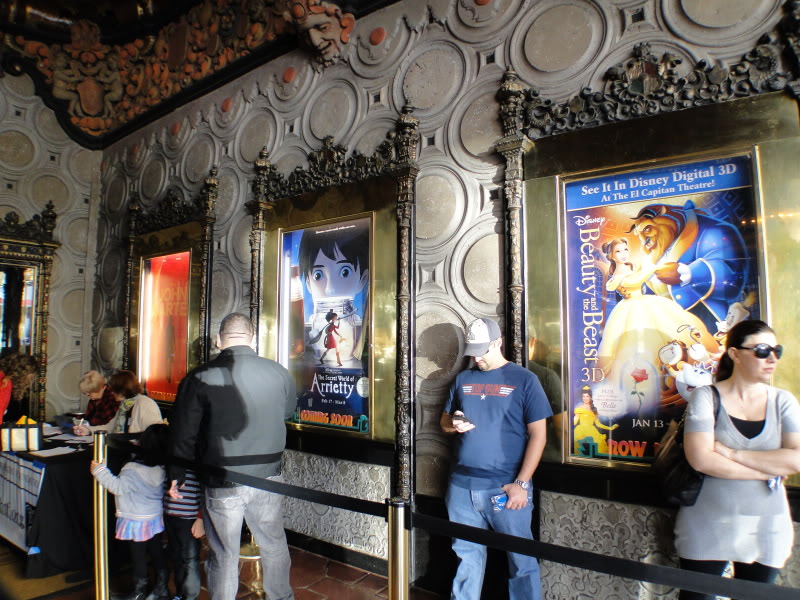 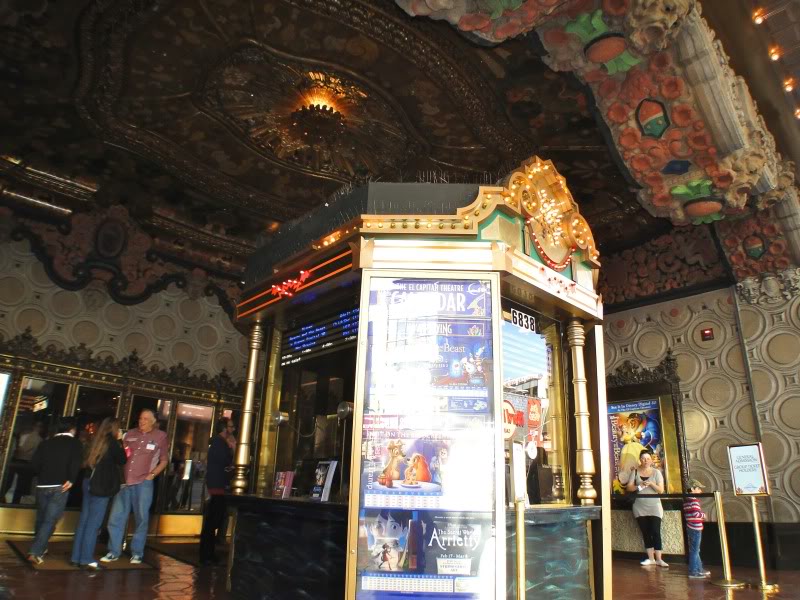 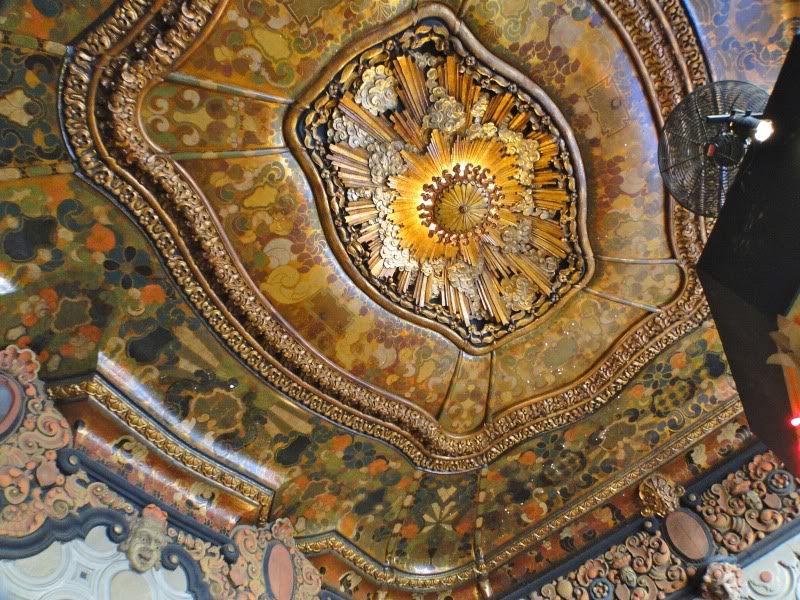 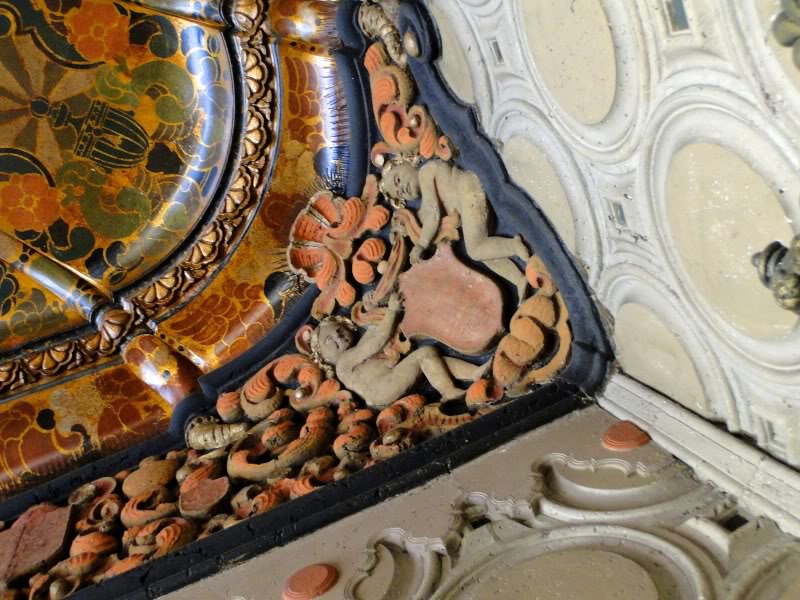 After 10 years of stage productions at the El Capitan, the entertainment industry began to change in response to the Depression and the growing popularity of the talkies. For one thing, it was much cheaper to show movies than to put on plays. The first film shown at the El Capitan was the world premiere of Citizen Kane in 1941, which Orson Welles booked there because he couldn’t get into any of the theaters owned by major entertainment companies who were wary of angering William Randolph Hearst.

After that, the theater was leased by Paramount and closed for a year to be transformed into a Streamline Moderne movie palace called The Hollywood Paramount, whose advertising trumpeted, among other things, “the most beautiful usherettes!” You can see post-remodel photos HERE. Although the new look had a very distinctive style, all of us in the audience gasped when we saw photos of the transformation, which completely obscured the elaborate decor of the original. Only the downstairs lounge remained intact.

Former site of the coconut milk bar introduced in the 1941 remodel. 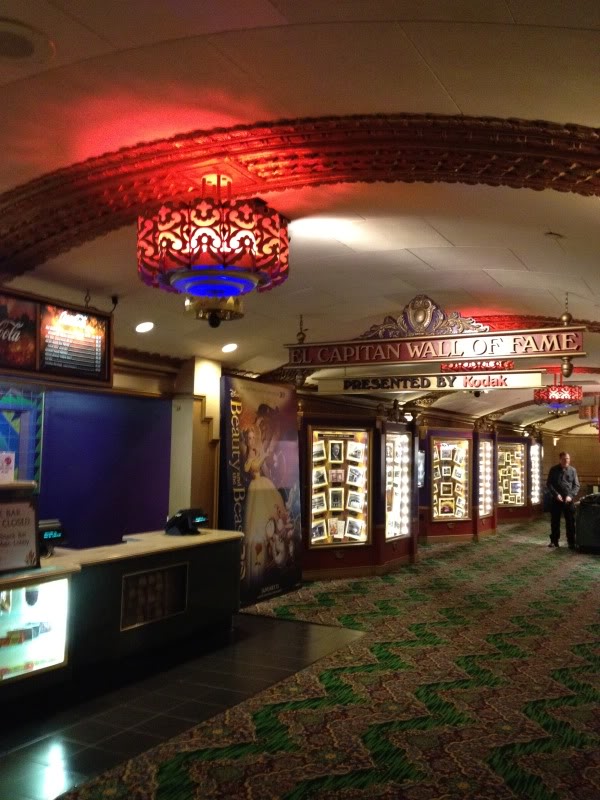 The El Capitan name and staff were shunted to the former Hollywood Playhouse around the corner (now the Avalon Hollywood), while The Hollywood Paramount operated under Paramount Pictures for just seven years. A Supreme Court ruling eventually forced movie studios to divest themselves of all their movie theaters. The Paramount continued to operate under a series of different names and owners until 1989, when then-owner Pacific Theatres entered into a deal with the Walt Disney Company to restore the El Capitan to its former glory.

Interestingly, the original plan was to evoke an Art Deco look. But on a walkthrough, one of the members of the Los Angeles Historic Theatre Foundatio poked around behind some walls and discovered that much of the original East Indian interior decor was still there. He was able to convince Disney to uncover it and reconstruct the missing elements. According to theater designer Joseph Musil, who spearheaded the redesign, about 70% of what you see today is original, while 30% had to be re-created. But the aim was that the theater appear to be completely original with just a slight facelift.

Layers of mustard yellow paint were stripped away and the opera boxes, which had been sheared off in 1941, were completely re-created by a specialty company in Berkeley, CA. The detailing in the storm lobby was full of holes where the art deco canopy had hung, so the team reproduced the orignal using mostly photographs (since few architectural plans remained). Inside, the team made molds of existing parts of the proscenium and then re-created it out of insulated material to help change the live theater acoustics to movie theater acoustics.

We were told that the terms of the tax credit used in the restoration dictated that any new decor elements not appear to be original, which is why the new lobby light fixtures and murals are so brightly colored. 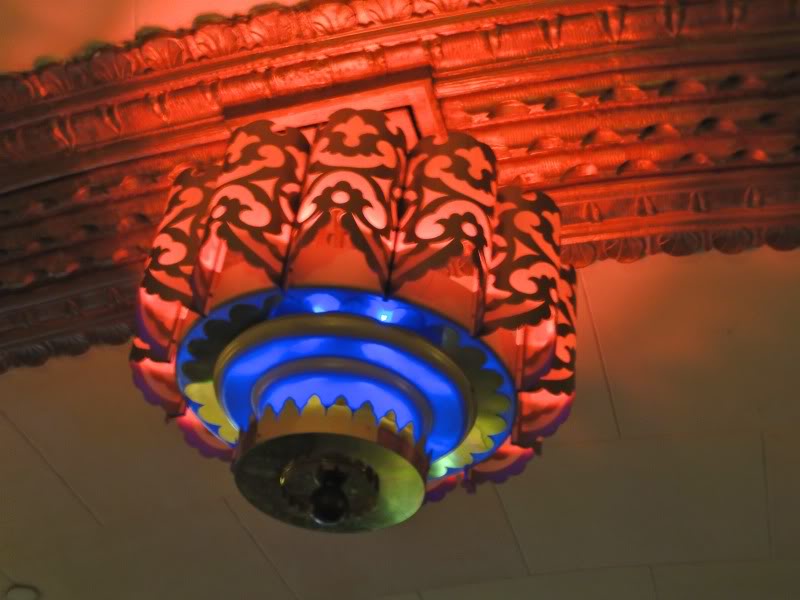 New lobby light fixtures are a simplified version of the originals 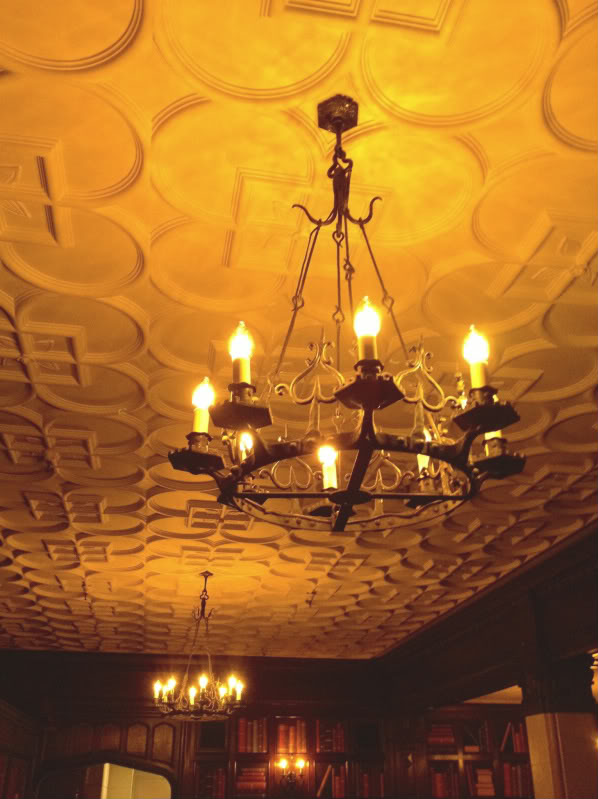 Another change was the creation of one large “blade” sign to replace three smaller signs on the exterior. The yellow-on-black color scheme was chosen so that the name would be visible far down Hollywood Boulevard even if the lights weren’t on. 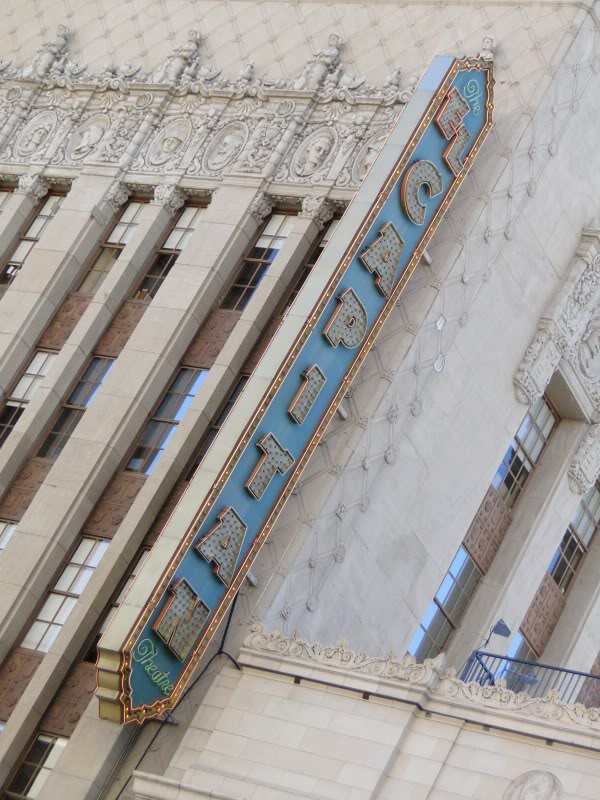 And of course there’s the entirely new marquee Musil designed, which is far more elaborate than the original but looks as if it’s always been there. He used materials that appear to glitter and shine without illumination in daylight, a far cry from the inexplicably unlit disco balls that graced the marquee before the demolition (and reportedly smashed into a million bits on Hollywood Boulevard when they were removed!). 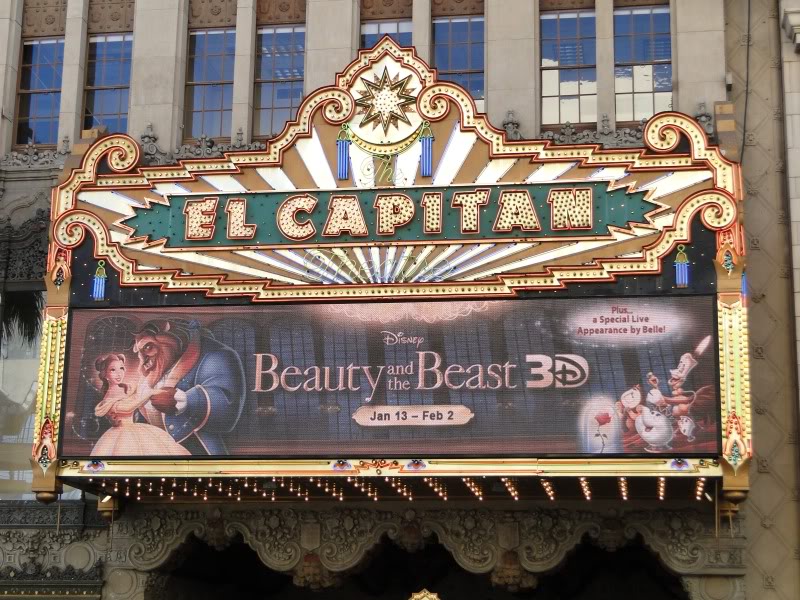 My favorite of all of Musil’s contributions is the four-curtain “Hollywood Romance” preshow (sometimes it almost makes me cry, it’s so evocative!), which is set to Bruce Broughton’s theme from The Boy Who Could Fly and harkens to a time when the number of curtains on the stage denoted how deluxe the theater was. A combination of LEDs and fiber optics creates the show on the various fabric curtains, which open to reveal one of two screens—a white one for standard movies and, now, a silver screen for 3-D movies.

Behind the screen is a concert-style array of speakers (rather than the traditional left, right and center) to ensure the highest quality sound at every seat in the house. 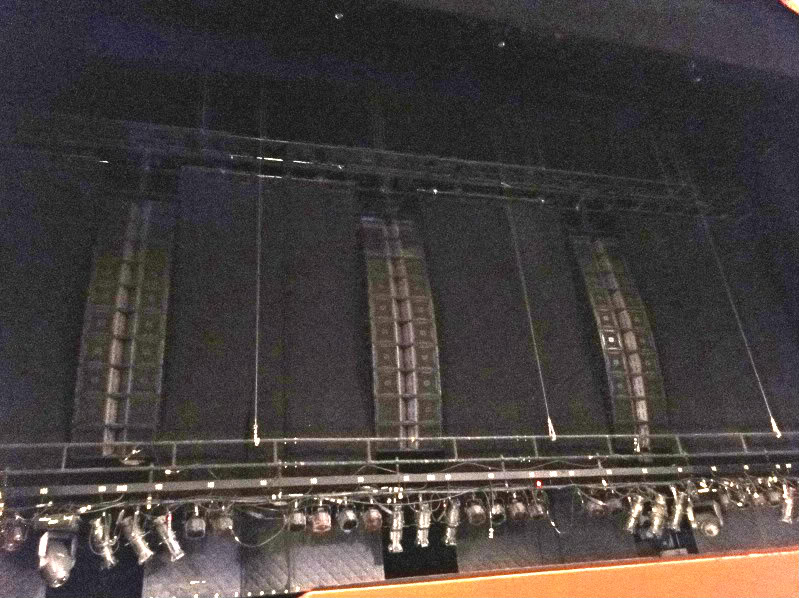 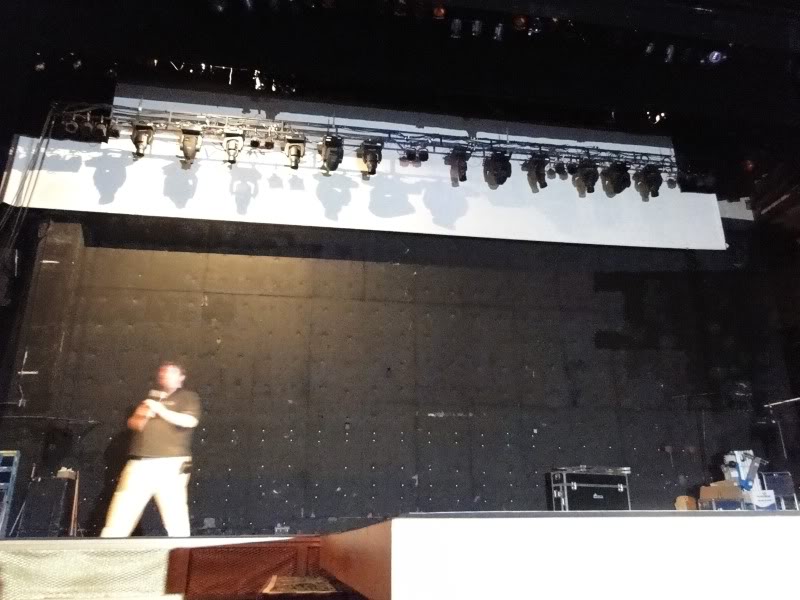 When the full depth of the stage is used, they can fit up to 18 characters on it, and they use what’s known as a “Mickey” lift (because it’s the same one Disney uses for Fantasmic!) to vault performers onto the stage quickly. Photos of that to come in the next installment…

If you’ve read this far, you might be interested in an excellent interview the Los Angeles Historic Theatre Foundation conducted with Musil 10 days before the El Capitan reopened in 1991. Not only does it include footage of the restoration in process, a photo of the old marquee disco balls, and even more interesting tidbits, it also has a couple of clips of the HIGH-larious stage show that played before The Rocketeer! It’s definitely worth the 20 minutes or so.

Up Next: Backstage at the El Capitan!

From the Vault: Holiday at Bay Lake Tower.... of TERROR!

Backstage at the El Capitan Theatre