By now you’ve already seen every other Disney-focused blog’s breakdown of D23 Expo 2013. But after being so vocal about my negative experiences at Expo 2009 and Expo 2011, I figured I’d better chime in with my opinions on Expo 2013 too, since my experience was so dramatically improved from last time.

With the exception of opening on the first day, crowd control was MUCH better this time. Prior to the 9am D23 member opening, there were separate lines for the arena, $1,500 Sorcerer package-holders, and the exhibit hall (although the latter should probably have been divided into one for the hall and one just for the Disney Store). On Day One, none of the crowd-control staff seemed to know which line was which, though, and only the Sorcerer package-holders were absolutely certain they were in the correct line. Then, when Disney did open the doors, StagePass distribution mysteriously remained closed until 9:30am, with red-shirted event staff refusing to allow people to even enter the giant queue.

(The staff-knowledge hierarchy was the same as last time: Red T-shirts know the least, red polos know slightly more, guys in jackets with generic “event staff” insignia pretend like they know what’s going on, and people in suits with earpieces know the most.) 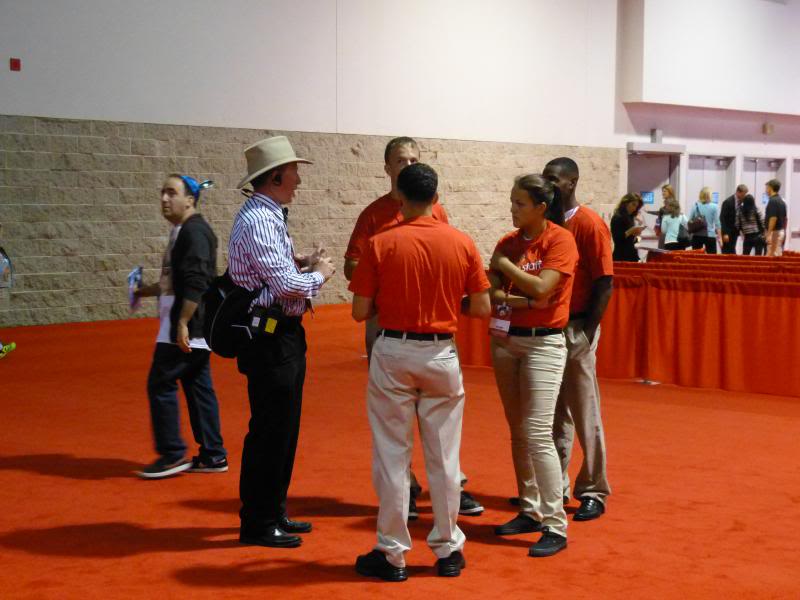 But after the hiccups of Day One, things seemed to go remarkably smoothly. Gone were the space-wasting skirted dividers and TV screens in the arena queue. In their place were the same tape lines you see on the floor at Comic Con, an inelegant but much more efficient way to demarcate the queue. All the wasted space surrounding the arena queue last time was gone: This time half of it was tape lines for the queue and half of it was a curtained-off overflow viewing area for the arena shows.

Even better, Disney finally cracked the nut of its no-cell-phone and -camera policy by allowing us to keep them, but sealed in plastic mailing bags. Genius! This eliminated the frantic last-second hand-off of electronics, the congested and confusing lines for surrendering them, and the stampede to retrieve them after the arena show.

Upstairs, StagePass-holders were corralled in rooms with more tape lines, while those attempting to go standby were held in snaking lines along the main corridor. I think Disney overestimated how many people would take advantage of StagePass, because the rooms were never full, while the corridor was frequently choked with standby lines.

On the second floor, Stage 28 gained a few more seats, for a total of 850. There wasn’t a lot of room to grow there because of the Treasures of the Disney Archives exhibit and additional rooms needed for the Sorcerer’s Lounge, Charter Member Lounge and Press Room. But the third floor’s Stage 23 doubled its capacity to 2,000—imagine if it had been that big for Dick Van Dyke and the Vantasticks last time!  And while they couldn’t squeeze any more than the usual 4,000 seats into the arena, at least Disney provided a 2,000-seat overflow viewing area. This was a nice low-stress way to watch the arena presentations without waiting in line for hours ahead of time. 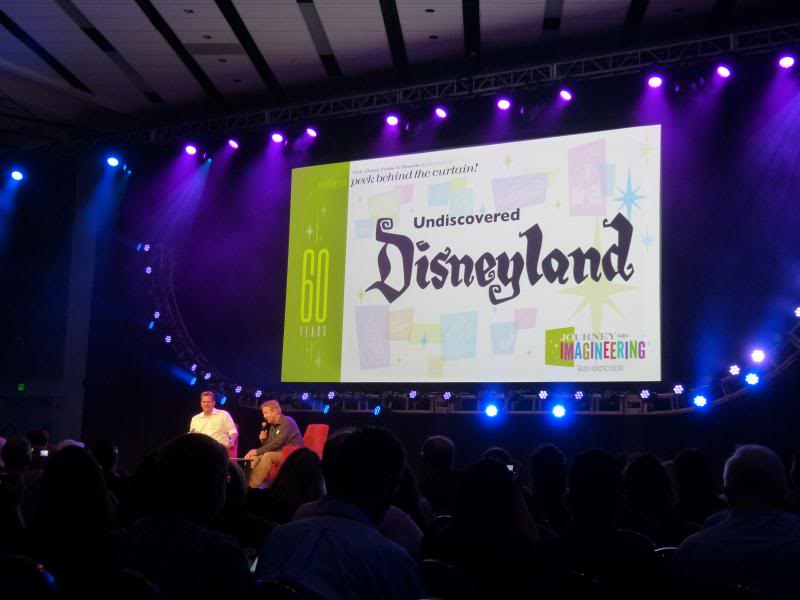 Although the fans have been calling for an Expo FASTPASS since 2009, Disney only just introduced it this year. And it seemed to be a hit! D23 tweeted each time a presentation ran out of StagePasses, and I noticed a LOT of those tweets. However, with Stage 23 so much larger, there still seemed to be plenty of opportunity for standby viewing of programs there. 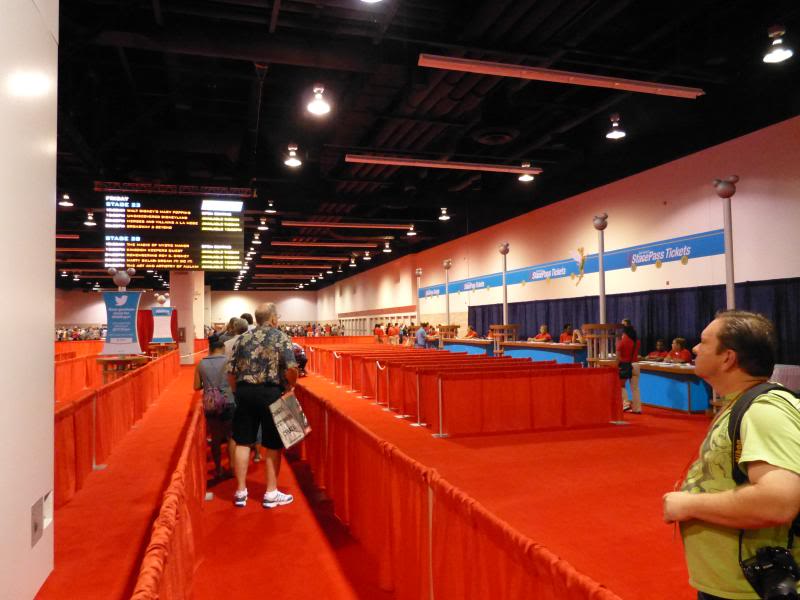 The way it worked was a little tricky, but once you figured it out, StagePass let you get pretty decent seats in a presentation without having to spend hours waiting in line. StagePass was only available for non-arena presentations starting after 11am, which meant you still had to wait in line for the first session of the day (not so bad if it was counterprogrammed against a popular arena presentation). You were allowed one pass for each person whose admission ticket you held for the 11am-3pm time frame, and after 12:30pm you could go back and get a StagePass for sessions in the second half of the day. The one drag was that you couldn’t hop out of the arena queue to go get a StagePass, but if another member of your party could meet you at the fence, you could hand them your admission ticket to use.

There was no Parks & Resorts presentation in the arena this time around, but I felt like WDI’s Journey Into Imagineering pavilion more than made up for it. They always have the best pavilion in the exhibit hall, but this year’s was even better than before. In fact, I wish they’d make it into a museum, or at least a traveling exhibit, so we could go back over and over! With the exception of a few false notes (a-choooMyMagic+oooooooo!), everything in the pavilion seemed geared to surprise and delight hardcore Disney parks fans. The biggest treat was the opportunity to see Harper Goff’s concepts for Disneyland back when it was still just an addition to the studio in Burbank, the mind-blowing Herbert Ryman overview used by Disney to sell the park to the bankers, and Peter Ellenshaw’s exquisite color concept of the park as it looked on opening day. Even better, visitors got to see the latter in full color under blacklight for the first time EVER, anywhere. What a treat!

Besides that, WDI brought out the fan-fave Hatbox Ghost as an animatronic and paired him with a DIY parrot guests could manipulate. They also shared gorgeous models for never-realized attractions like the Western River Expedition and International Street, plus strikingly different versions of Spaceship Earth and the Land Pavilion. And there were behind-the-scenes demos of the various processes used to create the attractions we  love. Plus, guests had the opportunity to talk to real-live imagineers and ask all those burning questions we park nerds have! 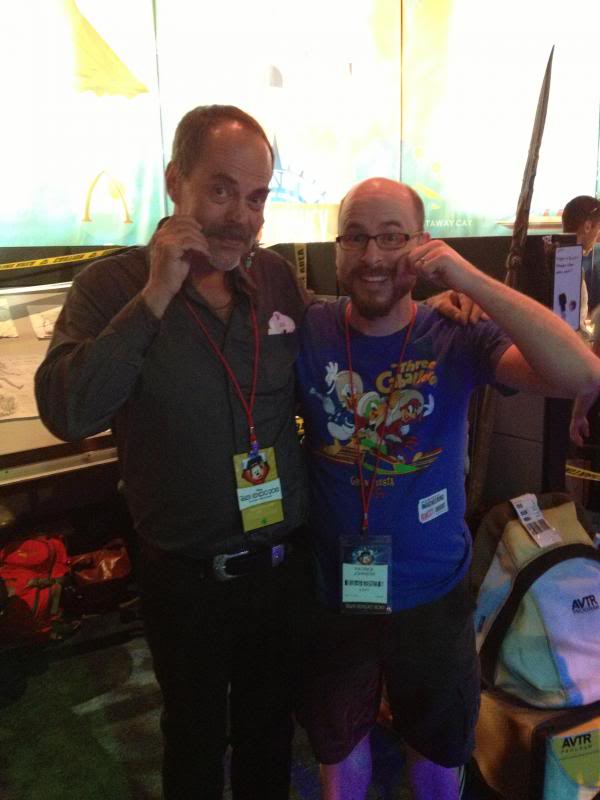 Where else can you rub elbows and twirl mustaches with Joe Rohde?

OK, from what I could tell, the food in the convention center didn’t get any better. But this time Disney invited local food trucks to line the street between the convention center’s two hotels, which meant you could actually get a decent meal on the go for not too much money. We got all our meals here and ate them on shady benches, in line for presentations, or even back in the room when Patrick had to work. This seemed like the convention’s best-kept secret, though. 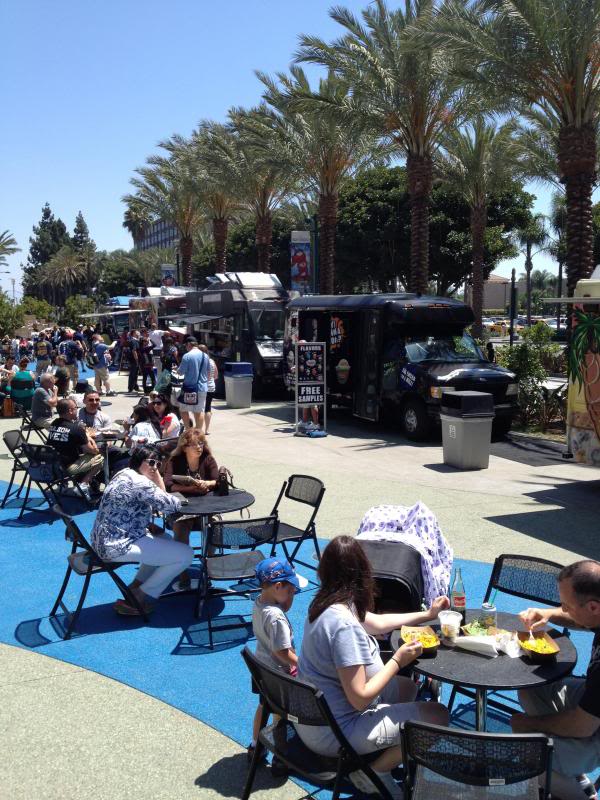 With so many other aspects of the Expo being “plussed,” we were surprised by how small the Archives exhibit was this year. There was only one room of exhibits this time, and it focused on just three properties: the world of Oz, Mary Poppins, and something called Teen Beach Party (I’m not sure what it is, but unless it includes snarky commentary by Mike Nelson, Tom Servo and Crow T. Robot, I’m not interested!). Yes, it was great to see Poppins artifacts like her recently recovered carpet bag and the original Peter Ellenshaw matte painting used in the opening sequence. But a lot of the rest of it has been seen in previous years, and if you’re not a huge Oz or Teen Beach Party fan, there wasn’t anything else to see. 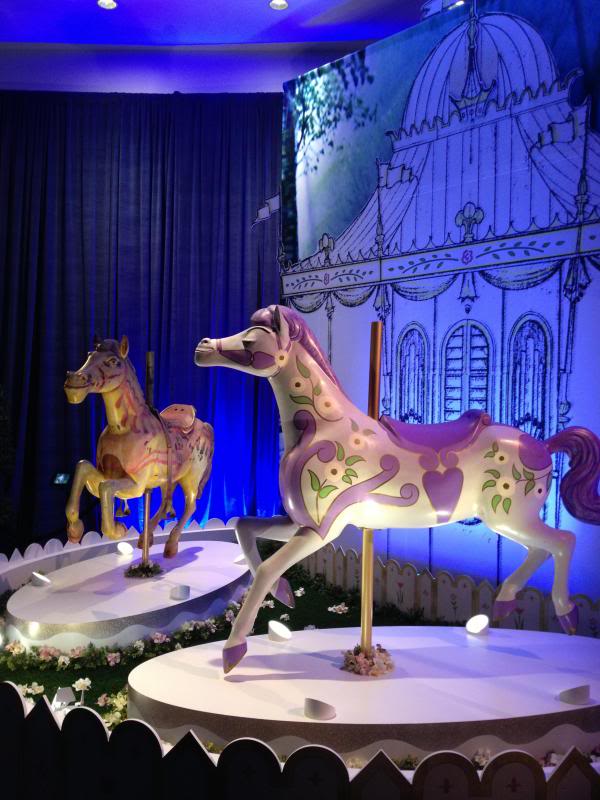 Additionally, there was no D23 store at the end of the exhibit this year—maybe because recently their exclusive merchandise offerings have been so paltry and tone-deaf to what fans actually want…?

I guess we should know by now that D23 rarely gets anything right on the first try. But the A la Mode Costume Contest was the most flagrant example of D23 mismanagement I’ve seen in years. And I’m not just saying that because Patrick’s Harrison Hightower costume didn’t win—we knew he wouldn’t win the moment we saw this a-friggin-mazing Hatbox Ghost costume! 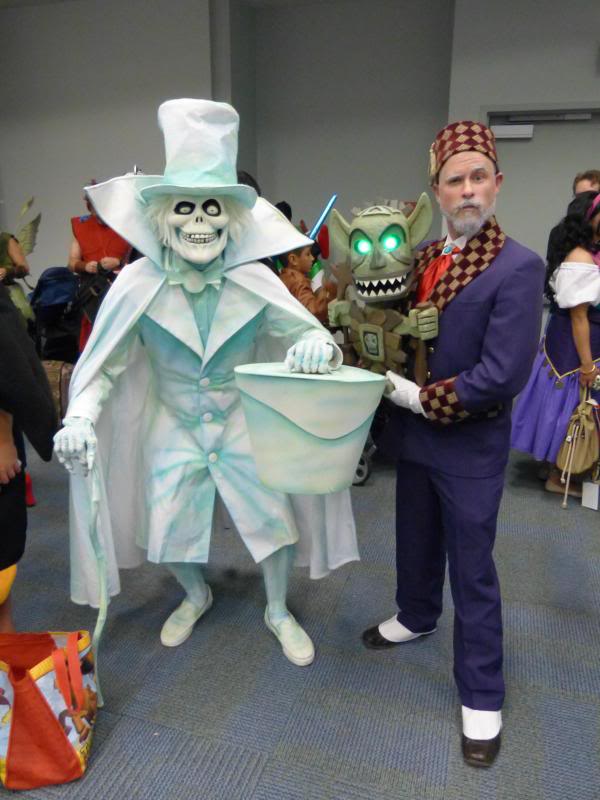 What’s inexplicable is that even the Hatbox Ghost didn’t win!

The show didn’t have a director or even a stage manager. The emcee was overheard saying he didn’t know he was hosting until noon that day. The contestants were required to sit around for almost 2 hours before the contest started for no reason other than to answer a 2-minute roll call. None of the contestants’ audio or descriptive text was used. And the judges clearly had no idea what was going on—they were given none of the supporting materials required by the contest application, and since the host flubbed most of the names and didn’t even think to ask the contestants questions til the last 10 or so people, the judges didn’t know what they were looking at.

Most mystifying of all, the judges seemed to have almost zero Disney knowledge—the closest was costume designer Mona May, who did amazing work on Enchanted and Haunted Mansion but had never heard of the Hatbox Ghost. As a result, every award went to the costume that required the most time to create (even though there was just one category for Craftsmanship) rather than adherence to the “Heroes and Villains” theme or originality. Next time, D23 needs to get a director for the show, a professional host, and a panel of judges who are actually familiar with the Disney parks, movies and characters. Ideally, there would be one movie costume designer, one person from WDI, and someone who does costuming in the parks. 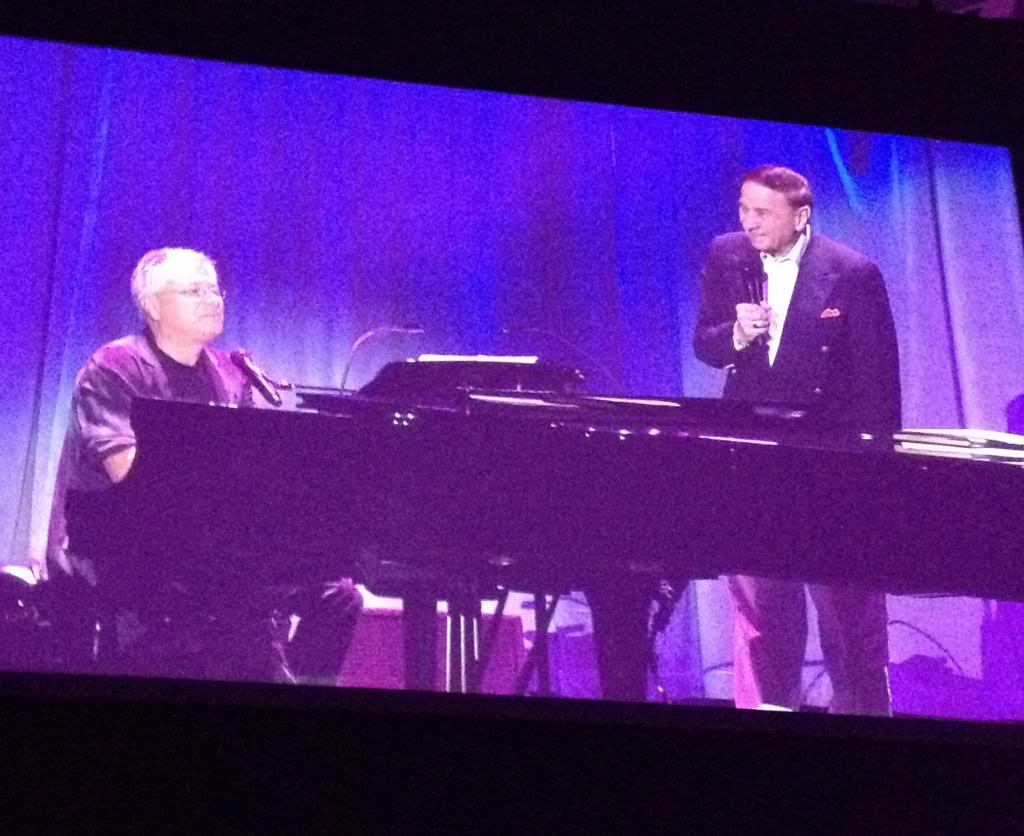 Can you beat Alan Menken and Richard Sherman performing “It’s a Small World” together? No you cannot…

That said, it’s pretty amazing that we really only had two complaints about the Expo this time. I think part of it is that our expectations were so low. But we also had none of the stress about getting into the presentations that we had in years past, mostly because they were all basically the same ones D23 has been doing at every Expo and Destination D event, so we’d seen them already. On Sunday, which should have been the most stressful day, what with all the counterprogrammed WDI presentations, I only went to one, and I was totally OK with that. For actually learning stuff about the parks and their history, I prefer the format of Destination D, where everyone goes to every presentation cuz they’re all held one right after another. D23 Expo is more about the arena shows and the WDI Parks and Resorts Pavilion. And now that things are beginning to run smoothly, I’m finally looking forward to the next one!

Stay tuned for in-depth recaps and a bazillion photos of the presentations, shows and exhibits at D23 Expo in the coming days…