For the past three Halloweens, we’ve had the honor of helping Dick Van Dyke decorate his house for the holiday. The story of how we started doing this is not very interesting: Patrick worked on a puppet project with a costumer who casually mentioned that she helped her pal Dick decorate his house every Halloween, and Patrick asked if they needed any extra hands. They did! Each year, a slightly different group of about 6–10 of us shows up, and Dick Van Dyke graciously welcomes us into his home, feeds us lunch and dinner, and pretty much lets us design the whole display ourselves.

As it turns out, he is a HUGE Halloween fan—it’s like Christmas for him! Each year he acquires a new animatronic figure or scene to add to the gruesome tableau (because Dick Van Dyke doesn’t go in for cutesy Martha Stewart-style Halloween—his motto seems to be “The gorier the better”!). He started out creating homemade props when his kids were young, but over the years as more merchandise has been produced, he’s shifted to buying elaborate set pieces online and renting from Hollywood prop shops. He loves tinkering with the complicated setups, but the payoff is when the trick-or-treaters start to arrive. He sets up directors chairs across the street and watches with good-natured glee as passing children shriek at the grisly effects. Meanwhile, neighbors like Kelsey Grammar and Paul Hogan roll up in golf carts teeming with family members and hop out for a photo op with Dick Van Dyke.

This year we decided to reintroduce the homemade element by creating a graveyard scene of cardboard headstones with silly sayings. 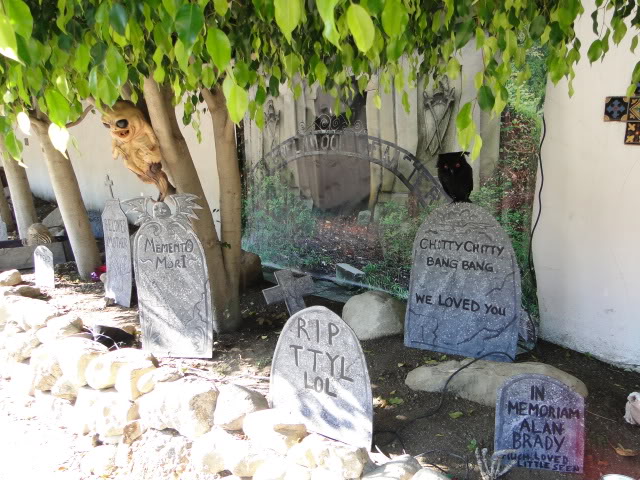 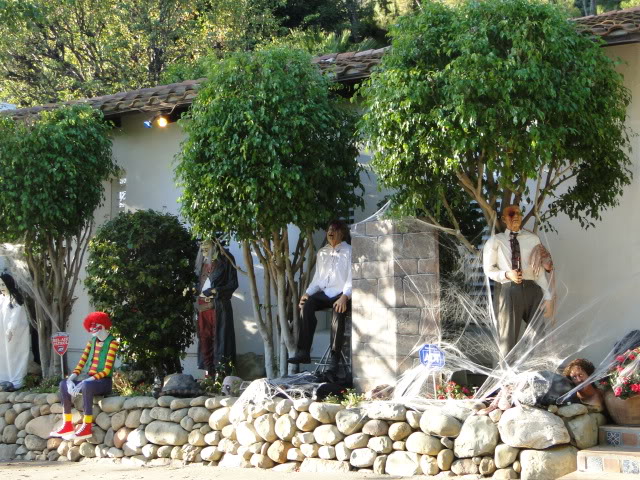 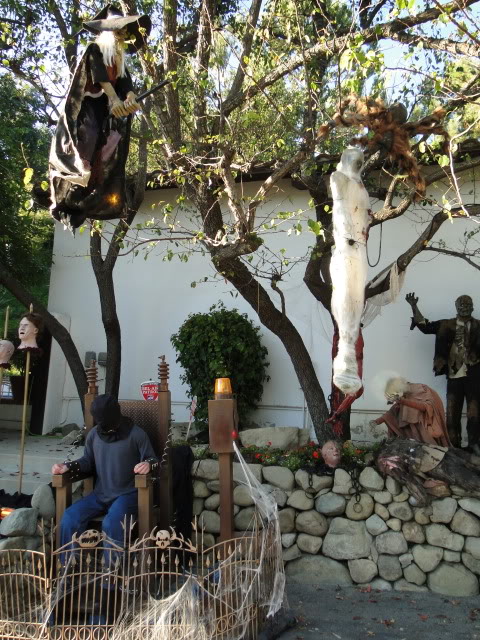 This guy isn’t store-bought, he’s an authentic prop from the movie Predator donated by Stan Winston. He and Dick had been planning to do Halloween together the year he moved into the house across the street, but sadly he died just a few days after moving. Can you imagine what that display would have looked like? 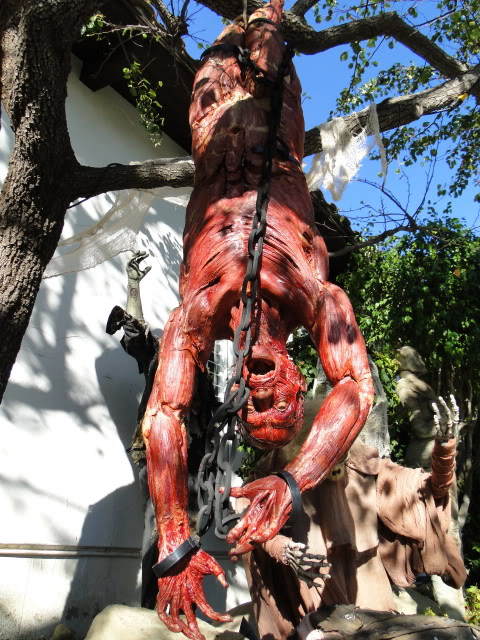 As if that weren’t scary enough, check out the harsh lighting in this shot! 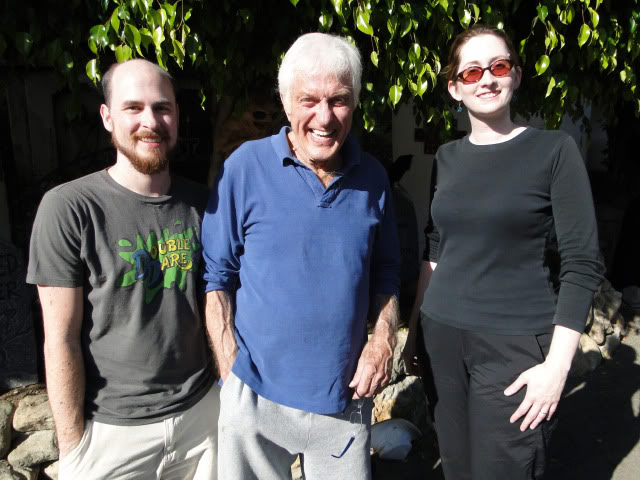 Patrick wanted to be part of the show this year, so he brought his Harrison Hightower costume. 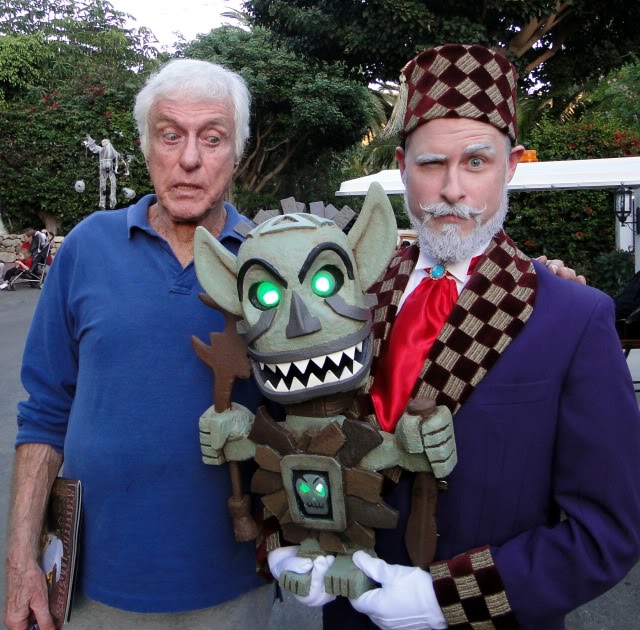 “Oh, hello. I didn’t see you there. I’m just relaxing on the set of my TV show, Diagnosis Murder…” 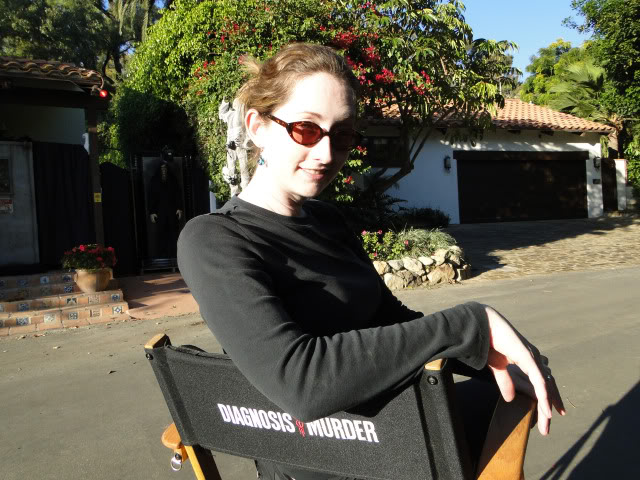 This year there were four new effects: The Reanimator, a Frankenstein’s Monster-type effect that rotated an animatronic dummy out of sight to be replaced by a human who jumps off the platform; two crazy guys, one who stabs himself in the eye with a screwdriver and the other who bashes his head into a wall (both inexplicably wearing suits…); and an electric chair execution complete with twitching, shrieking and smoke effects. The electric chair was the hit of the night, and Dick would throw the switch anytime a new group came by. 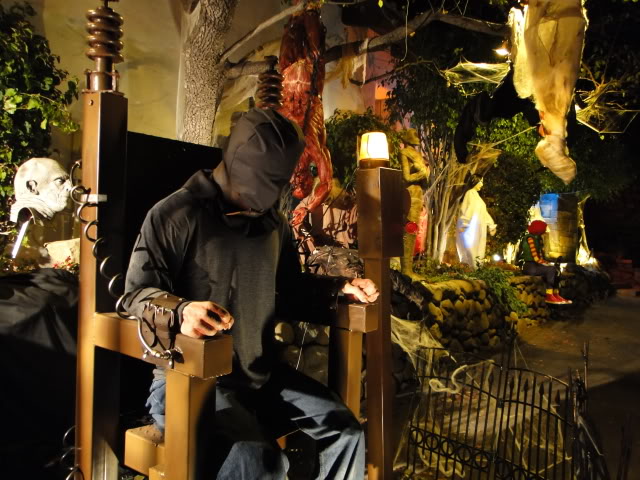 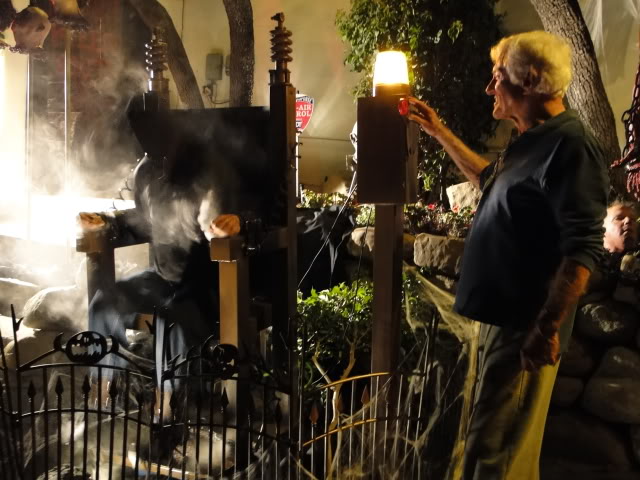 (Check out the wall Patrick painted!) 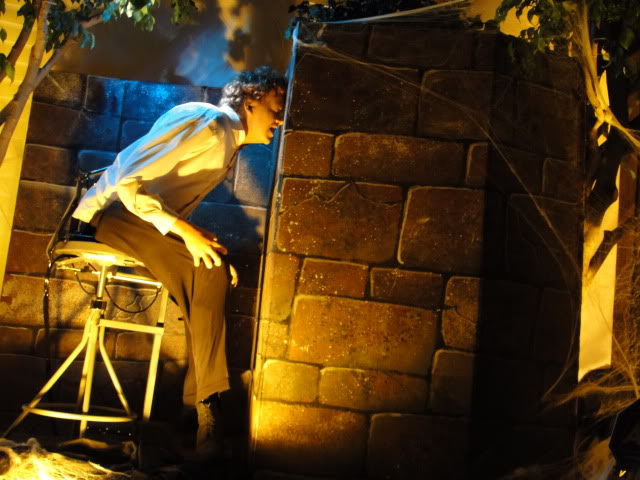 Here are videos that show some of the effects, graciously contributed by Dick’s neighbor, Jessica Steinberg.

For our ragtag crew, the highlight of the night came when we were eating dinner and Dick brought neighbor James Cameron into the house to meet us, explaining that we were the ones responsible for the Halloween decorations. Our jaws dropped as Hollywood special effects master James Cameron—James Cameron!—told us the display looked fantastic. It was hilarious! 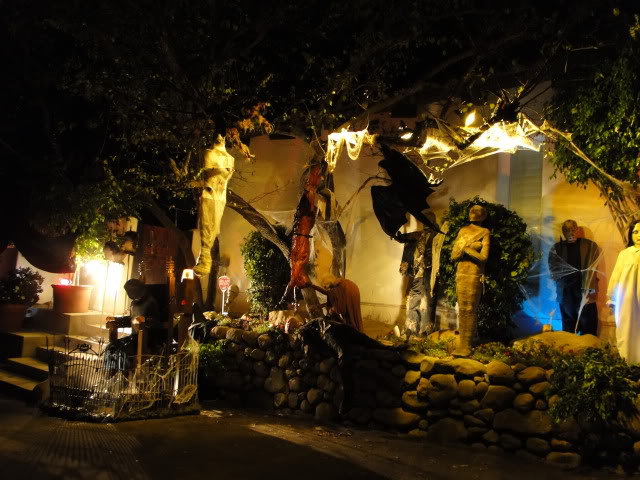 All agreed that this Halloween was the best one yet!

My Book Is Now In Print!